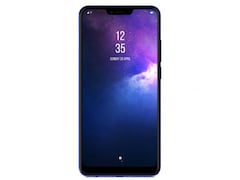 Xolo ZX mobile was launched in April 2019. The phone comes with a 6.22-inch touchscreen display and an aspect ratio of 19:9. The display sports Gorilla Glass for protection. Xolo ZX is powered by a 2GHz octa-core MediaTek Helio P22 (MT6762) processor. It comes with 4GB of RAM. The Xolo ZX runs Android 8.1 and is powered by a 3260mAh battery.

As far as the cameras are concerned, the Xolo ZX on the rear packs a 13-megapixel (f/2.0, 1.12-micron) primary camera, and a 5-megapixel camera. The rear camera setup has autofocus. It sports a 16-megapixel camera on the front for selfies with an f/2.0 aperture.

Xolo ZX is based on Android 8.1 and packs 64GB of inbuilt storage that can be expanded via microSD card (up to 256GB). The Xolo ZX is a dual-SIM (GSM and GSM) mobile that accepts Nano-SIM and Nano-SIM cards. It was launched in Electric Blue and Midnight Blue colours.

Connectivity options on the Xolo ZX include Wi-Fi, GPS, 3G, and 4G (with support for Band 40 used by some LTE networks in India) with active 4G on both SIM cards. Sensors on the phone include accelerometer and fingerprint sensor. The Xolo ZX supports face unlock.

Xolo ZX price in India starts from ₹ 9,999. The lowest price of Xolo ZX is ₹ 9,999 at Amazon on 1st October 2022. This Phone is available in 1 other variant like 6GB RAM + 128GB Storage with colour options like Electric Blue, Midnight Blue, and Midnight Black.