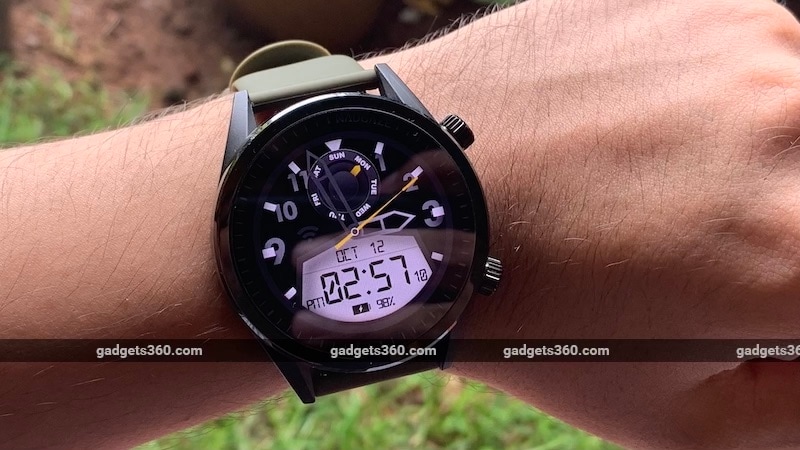 WatchOut Wearables MadGaze Android Smartwatch is an Indian attempt to make a smartwatch that can take on international competition, and as a result, the chunky smartwatch is loaded with features you didn't know you wanted, from simple things like a surprisingly loud speaker to bone conduction gesture control. Of course, this has the side effect of driving up the price of the watch, and it will set you back by as much as a good mid-budget phone. Although Android smartwatches have been around for a while now, no single one has really had the same kind of impact as the Apple Watch. This Indian company wants to shake things up, and so it has crowdfunded the watch on FuelaDream where it has raised Rs. 10 lakh so far against a target of Rs. 16 lakh, with nearly a month left to go. It is based on the Mad Gaze smartwatch from Taiwan, and made with an assembly in India, WatchOut said.

The watch can track your health while also offering up the usual apps like Maps for directions, as well as features like push-to-talk and gesture controls, but will it meet the same fate as other Android smartwatches? This is what I think after using the watch for a short period of time.

The watch comes in a simple black box, laid out so that the watch face is the first thing you see when you open it. The accessories are packed into a small compartment on the side, and the user manual is stowed in a flap under the lid.

The 1.39-inch circular display has a 400x400 pixel resolution. The design is simple — just a round face with a large polished bezel to offer some protection, two large buttons on the right, and a replaceable 24mm silicone strap — I got a light grey strap that went well with the dark grey and black tones on the watch's body, although you can choose from 16 colours including some really bright ones like Yellow and Mint Green, so people should be able to find a colour they like.

Unfortunately, the watch is very thick and heavy. It weighs 72g, which does not sound like much, but for reference, the Apple Watch Series 6 GPS + Cellular is 47.1g. The Mad Gaze smartwatch is certainly noticeable, and at no point while wearing it will you forget that you are, in fact, wearing the watch.

Coming back to the display, it's suitably bright and presented no issues in use outdoors. The built-in speaker is also surprisingly loud, and very clear. On the right side of the watch, there's a pair of large, clicky buttons that are used to control the interface (although the touchscreen is what you'll be using most of the time).

You can see the speaker grille on the right side, and the SIM slot to the left

On the back, you can see pins for the charger, which is magnetic to make it easier to connect. There's also a grille on the right side for the speaker, and a microphone a little above that, which also works really well. Right in the middle is the heart rate sensor. The Nano-SIM slot is fairly easy to open; the cover fits snugly and you won't have to worry about it popping open on its own.

The WatchOut MadGaze watch can be configured using the Mad Gaze app, which is available on both iOS and Android, and this is required to set up the bone conduction gesture controls. This is the big flashy feature that will grab most people's attention. What it means is that gestures like tapping or snapping your fingers together, and tapping different parts of the back of your hand can be used to control the watch. The controls are pretty smart, and it's a little surprising how well they work. It's also fun to try snapping and tapping on your hands to trigger various actions.

However, while this might be a really cool feature to show off to people, after the first couple of days it was just more comfortable to use the touchscreen. Others might feel differently — and there are times when it feels like a more comfortable way to use the watch — but for me at least, it didn't quite click.

The watch comes with two large buttons on the side

Since the watch also includes an unexpectedly good microphone and speaker, you could easily use it as your phone, receiving calls and even using the touchscreen to pull up the dial pad. There's also a preinstalled app called Zello that lets you use the watch as a push-to-talk walkie talkie. This can also be installed on phones, so even if you're the only person in your circle of friends who owns this watch, you can voice chat with others who have this app. It uses the data connection on your phone, or on the watch, or by connecting the watch to Wi-Fi.

In addition to all this, the watch also offers other features you'd expect, such as an accelerometer, gyroscope, and heart rate monitor, which means you can use if for typical health tracking functions as well.

The WatchOut Wearables Mad Gaze watch is powered by a quad-core 1.25GHz processor paired with 1GB RAM, and has 16GB internal storage. It runs Android 7.1. This is a slightly unusual choice for a smartwatch — Android Wear is the OS that is meant to be used for smartwatches, and Android 7.1 is not receiving further support.

The display remains clear even outdoors

It uses Bluetooth 4.0 to connect with your phone, and can also connect to your Wi-Fi. You can put in a Nano-SIM to use the watch as a phone. It packs in a 620mAh battery, which the company claims delivers 90 hours of standby time and 48 hours of working time. One thing to point out here is that you can't “shadow” your phone to your watch, unlike an Apple Watch — if you're using it to make calls from your phone's connection, you need to be in range.

The watch uses a proprietary charger that latches on to the back magnetically, but is a little fiddly. If you're not careful, you might realise the next morning that the watch wasn't charging overnight. In use, if I charged the watch overnight, it was down to around 20 percent at the end of each day. Maybe my usage is higher than ideal, or the display brightness was turned up too high, but charging each night was necessary for me.

Overall, the WatchOut Mad Gaze seems as though it could be a good smartwatch, and no downsides other than its weight are apparent so far, in my limited experience. That weight is likely necessary for the various features that it packs in, and for people that want a very masculine, chunky design, it might not even be an issue. I quite liked this device. I've seen a number of Indian startups make smartwatches over the years, and this is one of the more polished examples. Its gesture system is also highly innovative, which is great to see for a new company.