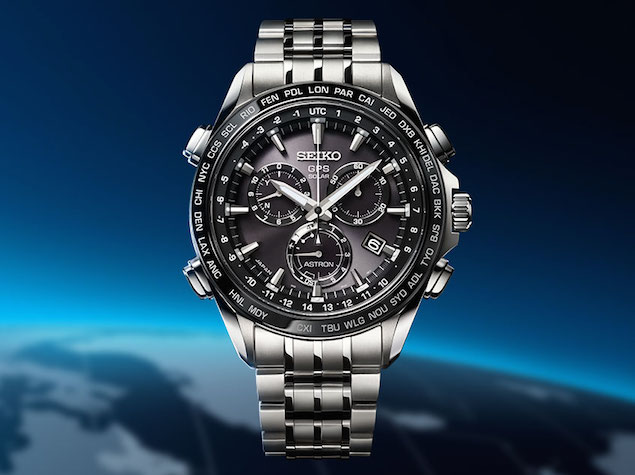 Among the many industries that smartphones effectively killed, the demise of watches has perhaps been the most pronounced. With most people preferring to consult their phone - smart or otherwise - to tell time, sales of low- and mid-range watches have steadily declined over the years. However, high-end watches are as, if not more, popular than ever, especially amongst those over 30 with the financial resources to indulge themselves. In that sense, the watch has gone from being utilitarian to - almost entirely - a fashion statement.

This began to change with the rise of smartwatch, looking to woo the cellphone generation with something that's more than just a timekeeper. But most smartwatches - even the Moto 360 that is widely regarded as the best looking smartwatch - pale in comparison to even the most basic watches in terms of looks. As smartwatch makers focus on the problems of design and battery life, watchmakers are approaching the problem from the other end, by integrating features like touch screen and GPS into their well-crafted offerings.

The Seiko Astron series of watches is one such example that comes with solar charging as well as GPS support. The Citizen Eco-Drive range of watches made solar charging popular and since then the feature has been spotted in various other models. The concept is pretty simple - a rechargeable battery stores energy whenever the watch is exposed to a source of light. In the Seiko for example, just 10 minutes of exposure to the sun - or 1 hour in a brightly lit room - is enough for the battery to power the watch for a full day. Of course the battery is continuously recharging itself when the watch is exposed to light and you shouldn't really need to worry about battery life unless you plan to go underground for long durations of time. Seiko claims the watch, once fully charged, can go up to 6 months with all its functionality intact, and up to two years in the Power Saving mode that cuts down on some of the features.

The indicator hand of the watch - the one on the tiny dial towards the bottom - shows how much charge the watch currently has, and during the couple of weeks we spent using the watch, it always showed full charge. Unless the watch is running low on battery, it will periodically connect to the GPS satellites when you are outdoors and automatically adjust the time without you having to do anything. The watch relies on brightness levels to get a sense of when you are outdoors. Since GPS data includes location information, the watch also knows where you are, so it can automatically set itself to the local timezone should you travel to new country.

You can initiate this process manually as well. Like other GPS devices, you will need to be outdoors and have open skies for it to work reliably. Press the B button (top left) for 6 seconds and the watch will try to lock GPS signal from various satellites. The top left dial shows how many satellites the watch is currently receiving data from. As with other GPS devices, the more satellites your device can receive information from, the faster the process will be. Seiko recommends you keep your wrist straight and pointed upwards, but if the watch cannot see at least 4 satellites, it will not be able to adjust the time (zone).

The feature works as advertised, as long as you are out in the open and not surrounded by trees or tall buildings, something not entirely unexpected. You can also manually change the timezone, and with it the local time. Pull the crown out halfway, and with every twist you change the timezone. Each clockwise movement suggests you've moved one timezone eastwards, while an anti-clockwise movement indicates a move in the opposite direction. The dial has codes for 29 cities, each representing a timezone, engraved of the outside. However, the Seiko Astron GPS Solar comes with support for 40 timezones in total, with others like Kathmandu (GMT +5.75) left out in between Delhi (DEL, GMT +5.5) and Dhaka (DAC, GMT +6), ostensibly due to space constraints.

What this means is, when moving from one timezone to the other, you don't need to make precise moments to adjust time to the last minute. Just twist the dial the number of timezones you've jumped, and the watch does the rest. Of course, you shouldn't have to do this at all, thanks to GPS-based time synchronisation. The fact that a feature you'll rarely use is so well implemented is an indicator of the attention to detail that's gone into designing this watch.

Unfortunately, you'll have to account for the daylight savings changes in each country yourself. The Seiko Astron GPS Solar does come with a perpetual calendar until the year 2100, which means it will automatically account for months with 30 days and February, including leap years. Since it comes with GPS, there's also a flight mode that prevents the watch from trying to communicate with satellites in-flight.

In terms of physical design, the watch is classy and understated. At 44.6mm, the dial is not as large as some of the watches that are in vogue these days, which, as someone with relatively tiny - some may say unmanly - wrists, we quite appreciated. The unit we received was the SSE003 model of the 8X Seiko GPS Solar series, which comes with a titanium case with super-hard coating. The glass is made out of sapphire crystal with super-clear coating and right underneath it has solar cells that turn light into electrical energy that is used to recharge the built-in battery.

The band too is made out of titanium with super-hard coating and it feels comfortable and looks great. It snaps open pretty easily by simultaneously pressing tiny buttons on either side and the rather unconventional locking mechanism with a largish pin that snaps into the other end keeps the watch secure enough that you don't worry about accidentally snapping it open. The SEIKO branding on the clasp is a nice touch, though it may bother those who prefer a clean finish.

The only complaint we have in terms of design is about the four buttons that stick out from the watch a bit too much for our liking. Of course design is completely subjective, and your opinion may vary. The 8X series of GPS Solar watches by Seiko has various other models with choice of titanium and steel bodies, and other colour options too, so if the SSE003 isn't quite to your taste, do check out the entire lineup.

The Rs. 1,95,000 tag may sound steep, but in the world of luxury watches, the Seiko Astron GPS SSE003 is a mid- to entry-level priced offering, that gets a thumbs up from us for its blend of style and technology.

Snapdeal Can Become the Alibaba of India, Says SoftBank CEO
Nine Things You Can Still Do Only on Android