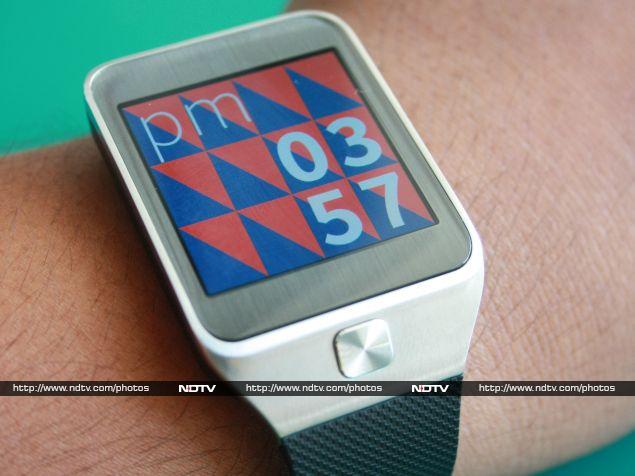 It wasn't a surprise when Samsung took the plunge and became one of the first mainstream brands to launch a smartwatch. Last year, the kickstarter-funded Pebble garnered a lot of love, and rumours of an impending Apple smartwatch were flying. The Galaxy Gear was mostly an average first attempt but Samsung has now had the time to improve and re-enter the scene before some other manufacturer can perfect the concept (we're looking at you, Apple). In fact, the tech giant might already be on the right track with a new report suggesting that it has captured 71 percent of the total smartwatch market share as of Q1 2014.

At this year's MWC, Samsung unveiled not one but three smart wearables: the Gear 2, Gear 2 Neo and Gear Fit. Those paying attention will have noticed something out of the ordinary: Samsung has stripped away the Galaxy branding for these three devices since they don't run Android.

The Gear 2 is technically the spiritual upgrade to the Galaxy Gear. We've spent a lot of time with it to find out if Samsung has succeeded in innovating and creating a smartwatch that is truly ground-breaking in its second attempt. 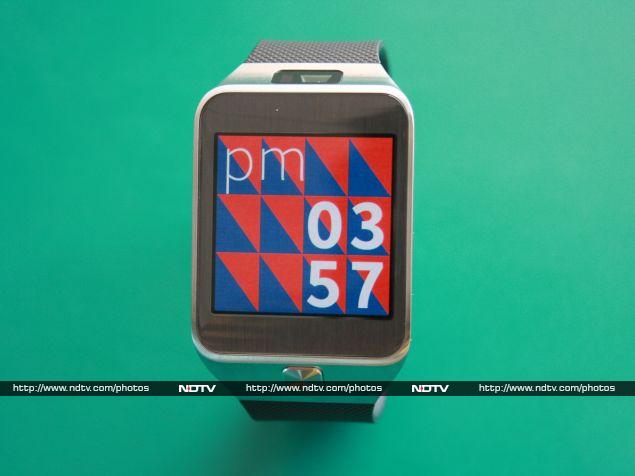 Design and specifications
One complaint that most people had with the original Galaxy Gear was that it didn't look premium. Apart from rectifying this with a brushed stainless steel finish, Samsung has also made practical and functional improvements in the design of the Gear 2 over its predecessor.

The camera and microphone are now on the body of the watch rather than the strap, and the home button is on the front rather than on the side. Moreover, the Gear 2 is thinner and lighter at 10mm and 68g, compared to 11.1mm and 74g.The release mechanism on the strap's hinges is easy to use, and additional straps are available in a variety of colours. The clasp itself, on the other hand, is a bit unreliable. You'll have to make sure you hear it click into place, or the whole watch could come off (or be yanked off) easily. 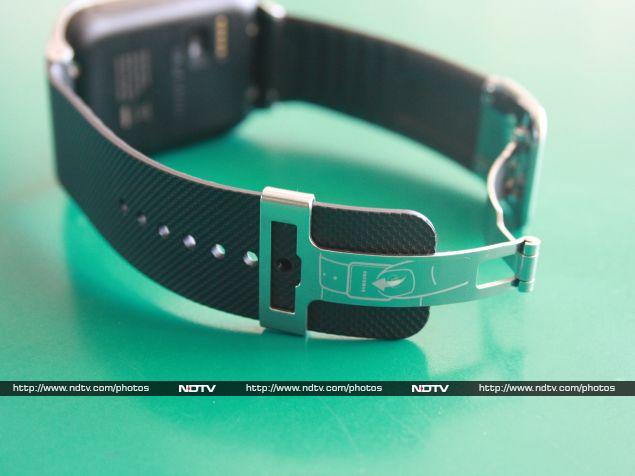 The watch face is a gorgeous 1.63-inch Super AMOLED LCD with a resolution of 320x320,  and it is by far the best screen we've seen on a smartwatch so far. The Pebble's black-and-white screen pales in comparison. Samsung's newfound fixation with fitness features is evident from the fact that even the Gear 2 features a heart-rate monitor on the back just like the one on the Samsung Galaxy S5. A charging terminal and speaker are also present on the back. A charging cradle, similar to the one used with Galaxy Gear, snaps onto the watch so you can plug the standard Micro-USB charger in. The Gear 2 is rated IP67 which means it is water resistant up to 1m for around 30 minutes. 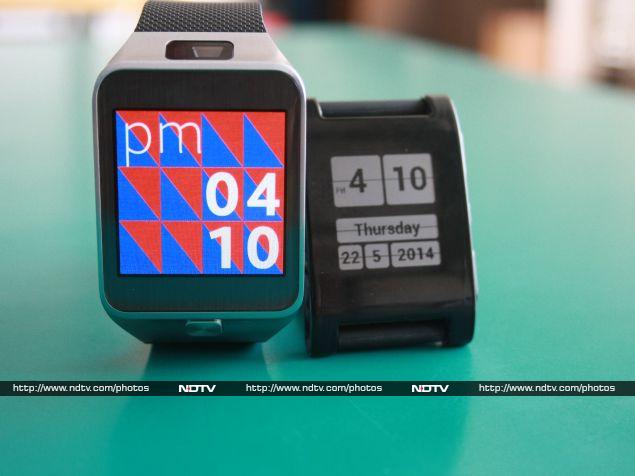 Powering the Gear 2 is a slightly bumped up 1GHz dual-core processor and the same 512MB of RAM seen on the Galaxy Gear. For storage purposes Samsung provides 4GB of flash. The battery is now a 300mAh unit compared to the original's 315mAh. Samsung claims that it can provide two to three days on a single charge; a huge improvement over the 25 hours battery life of the Galaxy Gear. There is also an IR blaster beside the 2-megapixel camera.

Software, Usage and Performance
The most important change comes in the form of software, with Samsung introducing Tizen, a Linux-based OS built in partnership with Intel. If reports are to be believed then the Galaxy Gear will also be updated from Android to Tizen, and Tizen-based smartphones are also expected to be launched soon (though you won't get a feel of how future phones might work based on this implementation).

The Gear 2 can connect to a selected number of Samsung smartphones over a low-power Bluetooth link, and the setup is very simple and user-friendly. Using the Gear Manager app, we found setting up the smartwatch to be a breeze. The Gear's OS has absolutely no lag. 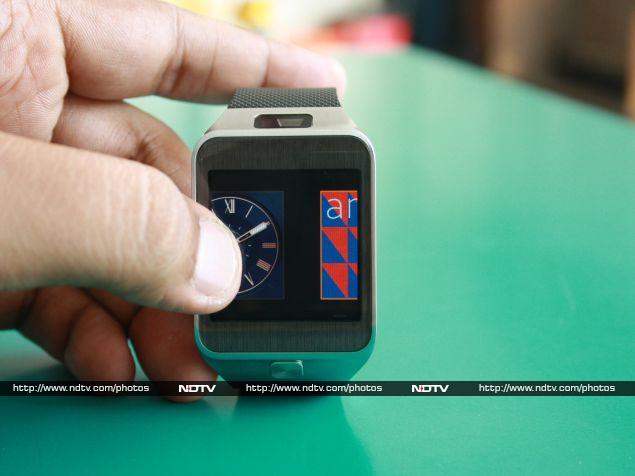 Most of the default settings can be changed, including the home-screen, settings for the various apps, and other settings in general. For example, as soon as we received the watch we enabled a shortcut to bring up the camera by double-clicking the home button. We also changed the clock to look more like a watch than a digital mess. The screen goes blank when at rest, but there's a gesture that wakes it up when you raise your arm.

A single downward swipe from the top acts as the 'back' function. It can be used to head back to the main homescreen - the clock - from anywhere. Users can choose to view the menu icons on screen as individual large tiles or in clusters of four. 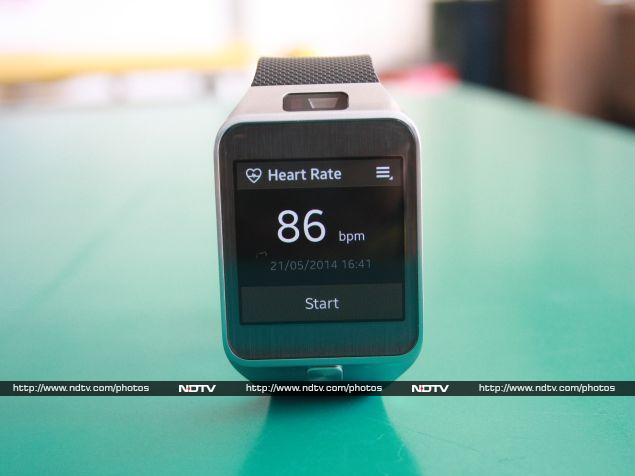 The Gear 2 displays notifications, but one cannot respond to them. More often than not we had to switch our attention to the paired Samsung Galaxy S5. Samsung provides preset responses only for the messages app. One can use the Gear 2 to make calls, check logs, play music (handy when you also use Bluetooth headphones) or control media apps on the smartphone. Also, the contacts app features a rather intuitive scroll mechanism. These are only the basic functions: the Gear 2 can do much more.

For starters, let's take a look at the fitness apps. A Heart Rate app can monitor beats per minute when the watch is worn below your wrist bone. We found it worked better than the monitor on the Samsung Galaxy S5. A pedometer app tracks the number of steps yet take, but for the most part it doesn't work well. There is an exercise app that can be used in different modes such as walking, running, cycling, and more. It feels as though Samsung tried to make the Gear 2 an all-in-one smartwatch and fitness tracker. Unfortunately, the fitness features are not up to the mark. One might want to stick to specialist devices like the ones made by Fitbit. 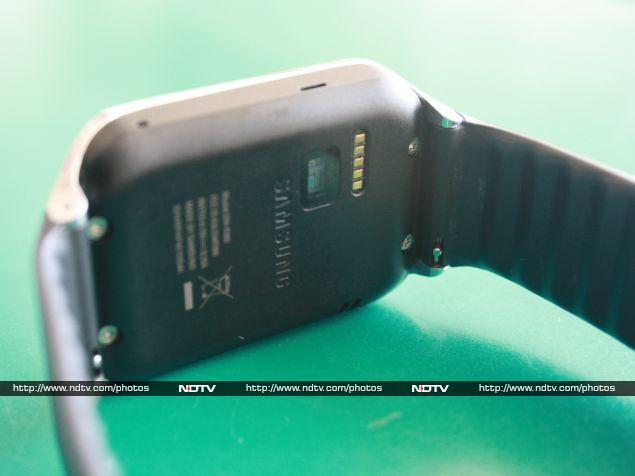 Samsung also includes a Sleep app that switches off most notifications and determines the amount of time one has stayed motionless through the entire duration of the sleep cycle. We can't tell for sure if the data is accurate. Funnily enough, we had the most fun with the IR blaster- a piece of technology that has been around for ages. Using the WatchOn app, we managed to amuse colleagues by switching their televisions on and off - now we know what to do the next time a family member refuses to switch to our favourite channels!

S Voice works like a charm for basic commands such as calling someone or checking the weather, but there is very little else it can do. We really don't see the point of a camera in a smartwatch, but for those who are interested, the 2-megapixel camera on the Gear 2 takes serviceable photographs and 15-second videos. 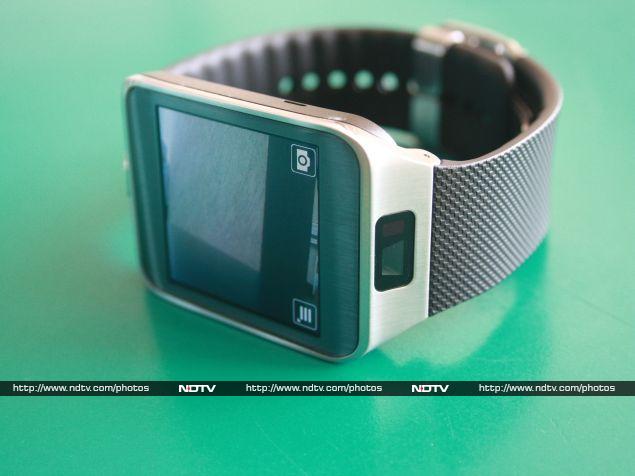 Despite our constant badgering, the Gear 2 managed to last almost two days which is very close to what Samsung claims. This is good battery performance for a smartwatch. Interestingly, when the battery level is low, the Gear 2 automatically cuts the Bluetooth connection and reduces its screen brightness.

Verdict
Early adoption of technology such as a smartwatch is bound to cause heartache. There are multiple factors to bear in mind before jumping the gun, such as rapid obsolescence and potentially limited long-term support. In that vein, just like the original Galaxy Gear, the Gear 2 has a lot going against it. 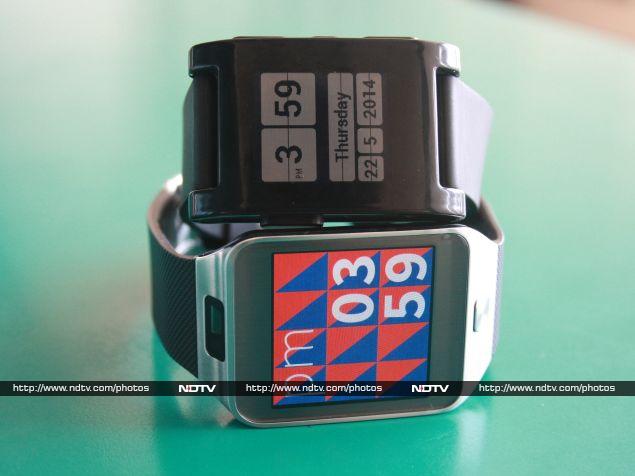 It works only with a few Samsung smartphones, phablets and tablets. Even if you've pledged lifelong loyalty to Samsung, the other hurdle is the price. At Rs. 22,550, it's very expensive. Couple that with the street price of the cheapest compatible Samsung phone, the Samsung Galaxy Grand 2, you'll easily end up spending upwards of Rs. 40,000.

We actually liked Samsung's take on how a smartwatch should look and function, but the Gear 2 is far from perfect. It's a minor upgrade to the Galaxy Gear, and Samsung will need to do more work to develop products that will appeal to a mainstream audience.

The future holds a lot of promise for smartwatches with the imminent launches of the Moto 360, Qualcomm Toq and LG G Watch. Also, the new Pebble Steel is already on the market. We'd suggest users wait and watch.