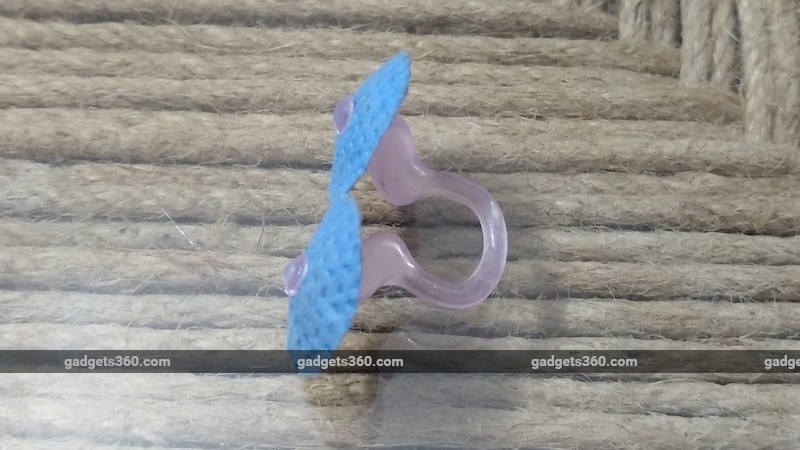 Most of the products we review fall into an established category, but in the case of the Nosk, it's necessary to first talk about what it is in the first place. The Nosk is a fairly unique air pollution mask, which helps deal with particulate matter in the air. Given the situation in Delhi and other cities in India these days, it's a product with the potential to be extremely useful - if it works. Why the skepticism? Because unlike a typical air mask that covers your nose and mouth, the Rs. 499 Nosk is a set of tiny plugs that sits inside your nostrils.

On the plus side, it is near invisible, and leaves your mouth free for eating or talking. On the flip side, the feeling of something inside your nostril doesn't really go away even after a week of regular use - it was much easier to get used to wearing a face mask. After over a week of testing though, we're in a better place to answer the most important question of whether it cuts the pollution or not. Here's what we learned.

How does it work?
According to the company, the product was first developed in South Korea, in 2007. The filter is registered with the US FDA, and is safe to use. The way it works is pretty simple too - there are two round filters attached to a U-shaped piece of plastic. Just insert the tips into your nose, and the clip will hold against the middle wall (called the columellar segment, though no one probably knows that).

Best Air Pollution Masks You Can Buy in India

The plastic clip is clear so once you've inserted the plugs, the whole thing is pretty much invisible, and although it might sound uncomfortable the design stays in place without pinching too hard, so you won't really mind having it in place.

One area of concern for us is that the round shape doesn't perfectly line up with the nose, which has a more elliptical opening. There's a possibility that you might experience a ticklish feeling with the Nosk in place - we did, for the first few times we tried it, as the edges curled and brushed against the wall of the nostril.

With the Nosk in place, you'll find breathing just a little bit harder - that's because some air is being blocked alongside the particulate matter. It shouldn't be too hard though - it should be similar to how you feel inside a normal air pollution mask. That's all there is to it, and it works pretty well, though more on that in just a bit.

Using the Nosk
As we mentioned, the Nosk goes into your nose, so you might be thinking that it's a use and throw kind of product. That's not the case though, as the Nosk is meant to be re-used. Each set of filters (you get two in a single pack priced at Rs. 499) can be used for around 24 hours - assuming that you are using this only twice a day while you commute, that could work out to around 12 days of use - so the idea is that you can get close to a month's protection for Rs. 500. In other words, you're going to be putting that clip into your nose again, and again, and again across multiple days.

Do Air Masks Help With Pollution? Which Ones Actually Matter?

Don't get grossed out though - the good news is that it's also washable. You shouldn't use any soap or detergent on the Nosk plugs (after all, they're going right up your nostrils) but the company recommends rinsing it under running water whenever you take it out. We went a step further and gave it a short rinse before inserting it as well, so that there would be no dust on it, although it comes in a clamshell pack that should keep it clean between uses.

The slightly moist filters also felt more comfortable to wear and made it easier to acclimatise to using the Nosk, in our opinion. Cleaning after use on the other hand is not optional - like it or not, there's going to be some gunk in your nose, and letting that dry out on the filter pretty much ruins it.

The amount of time you can breathe through the Nosk really depends on the amount of particulate matter that it traps - there's a limit to how much it can trap while still letting you breathe effectively. Think of it like this - when you come home from a long commute and wash your face, do you see a layer of grime come off? Well, that's going inside your nose as well, and clogging up the filter. Once it becomes hard to breathe through the Nosk, it's time to discard it and move on to the next one.

Did it make a difference?
We tested the Nosk in a number of different scenarios to see how helpful it would be. Step one was the simplest - get into an auto, and take a ride on the Outer Ring Road (ORR), which can be one of the worst stretches of road in Bengaluru. In our experience, this isn't a good stretch to be in an open vehicle even with a face mask on, and the same was true with the Nosk. The amount of vehicular pollution is so bad that even the amount that gets in through the filter will leave you feeling weak.

Also, unlike some face masks, such as the Cambridge Mask Company for example, which come with a carbon filter as well as a particle filter, in the case of the tiny Nosk, there's no such filter. This means that while the harmful SPM gets blocked, harmful and malodorous gases do make it through. It's better than nothing, but honestly, the only solution to these stretches is to avoid open vehicles altogether if you can.

We Tried 5 Popular Air Purifiers Over a Year. Here’s Everything We Learnt

Next up, we tried the Nosk while on the treadmill - the air is clean enough in there, but we wanted to see how effective it would be when carrying out a strenuous physical activity. Here, the Nosk worked great, in that it was easy to breathe through, though you need to keep reminding yourself to breathe through your nose and not open your mouth. Deep breaths through the Nosk worked with no issues. Satisfied, we decided to take the show on the road, and went to the busy 27th Main Road on HSR Layout.

It's a crowded thoroughfare with a lot of cars and buses plying, and while it doesn't get as congested as the ORR it's still pretty unpleasant to walk through. In the past, we've used a face mask, which makes a difference, but tends to draw a lot of attention as well. The Nosk did a good job of dealing with the pollution on the road, with the added advantage of being invisible to most people we passed. That, and the fact that you can wear this and still talk to people are two big advantages that it has over a traditional face mask.

Using it in Delhi, the Nosk proved to be fairly effective. It can't really cut out the entire assault on the senses that is Delhi's air, and from the moment we entered the city, some pollution simply makes its way through. That being said, the Nosk still made a huge difference in the air we were breathing - something we realised only after we reached home, and took it out. Within just minutes, there was a burning sensation in the nose, and in an hour, blackish phlegm came up. The Nosk had helped avoid this - but you can't keep it in all night, so make sure you have air purifiers in your house.

On the other hand, there are downsides as well. For one, your mouth is not covered, and you could well breathe in air from that path as well. The other issue is that while it isn't uncomfortable to wear a Nosk, you're always aware of it, which can be a point of bother for some people.

Everything You Need to Know When Shopping for an Air Purifier

In fact, some people we spoke to simply balked at the idea of putting anything up their nose - and particularly not for a second time. If that is something which bothers you as well, then we're probably not going to be able to change your mind, but honestly, with the rinsing it doesn't feel like you're doing something that's unhygienic.

There's also the question of how good a seal you'll get with the Nosk. Obviously it doesn't have the coverage of a full face mask; it does seem to be effective, but there's no simple test to quantify that, to measure how many particles actually made it through our nostrils, beyond the test results that Nosk is claiming.

Verdict
Despite some doubts, we really liked the Nosk. It's a little more expensive than what you'll spend on air masks over a year, but not so much that you can rule it out on those grounds.

We also didn't find it uncomfortable, and thought it was about as effective as using an air mask - with the obvious qualifier that you should keep your mouth closed while out in a badly polluted setting. Typically, we're yanking a mask on and off to talk to auto drivers, which can be really inconvenient. Being able to talk normally was a big plus, and so was the fact that it doesn't draw stares the way a colourful mask does.

At Rs. 499 for a pack of two plugs, which should last you up to a month, we think that the Nosk is at least worth trying out, and for our part, we're probably going to stick to it for longer, despite some reservations as explained above.

iPhone X Set to Launch in South Korea, Thailand, and 12 More Countries by November End
Samsung Pay Adds 1 Million Users in India in Over a Month