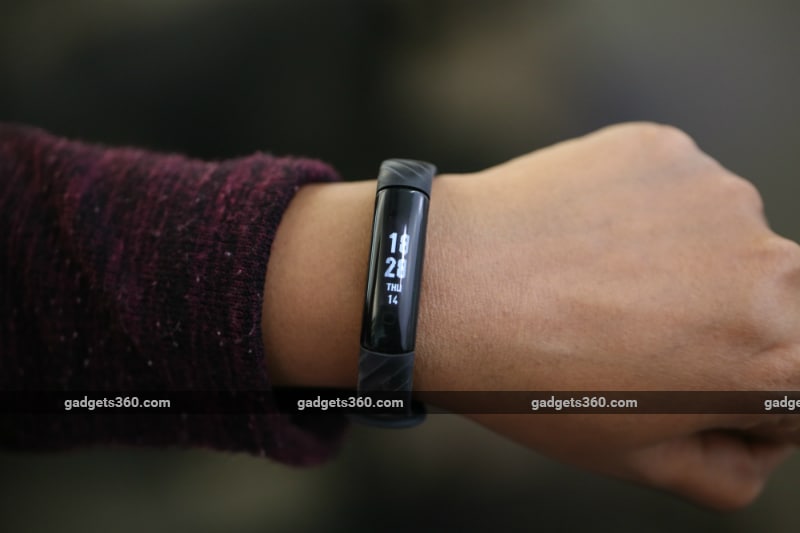 MevoFit Slim + HR is a fitness tracker made especially for women

Digital fitness startup MevoLife recently launched the MevoFit Slim + HR fitness band in India. In a marketplace that is flooded with fitness bands, the MevoFit Slim + HR stands out because of its target audience. This wearable is aimed at women and is packed with female-centric features. The band helps women keep track of their monthly period and ovulation cycles, alongside the usual sleep tracking, calorie counting, and step counting, which most fitness bands offer these days.

Is the MevoFit Slim + HR the ultimate women-centric fitness band, or should you buy a more reasonably priced gender-neutral product such as the Mi Band 3? We find out.

The MevoFit Slim + HR fitness band has a heart rate sensor at the back, and there's also a MevoFit Slim variant that doesn't have this feature. The tracker comes in three basic colour options – Black, Blue, and Red. We used the Black variant and the band was quite sturdy with a firm grip and no rough edges.

The removable band has a textured finish that makes it look different, but we're not sure whether it makes a style statement. For a fitness band that is targeted at women, not enough effort has been put into making it aesthetically pleasing on the wrist. That being said, it is quite slim and sleek, keeping in mind a female wrist as opposed to a male wrist which would be a little broader.

MevoFit Slim + HR has a slim and sleek design

The band sports a 0.87-inch OLED touchscreen with a small capacitive button at one end. Tapping the button lets you scroll between different screens that show you the time, steps taken, heart rate, and distance covered. We really liked the build quality of the tracker and the band that holds it together on the wearer's wrist.

The MevoFit Slim + HR offers basic features including a sports mode, step counter, sleep tracking, distance tracking, and calorie counting. The MevoFitfitness tracker app also has a period tracker, ovulation tracker, beauty tips, and smart reminders which are targeted at women. The band alerts you when you get calls and text messages. It lets you set up an alarm, and even change clock faces.

The app interface is quite simple, giving you exact instructions to pair the fitness band the first time it is launched. The home page shows your steps, distance covered, calories burnt, hours slept, water intake, and heart rate.

The MevoFit app has a blog section that features posts on beauty, managing weight, eating right, and even reducing stress. MevoFit hasn't published the authors' professional qualifications, but the tips section is essentially filled with suggestions that might or might not work. The tips aren't based off research studies, and we cannot determine the trustworthiness of these articles.

The blog lists tips and tricks on various topics, such as how to manage food cravings, health tips for the lazy, and more. We found the fat loss and low carb recipes like couscous salad, lentil soup, and vanilla crepes, to be quite useful.

The blog section can be found in the Profile tab. There's also a manual green tea and coffee intake tracker in the this tab. A Shop Now button sits on top of every tab, and lets you buy a range of MevoFit products, if you want to. There's also a Community tab that lets you get in touch with other MevoFit fitness band users, and a Challenge tab that lists several goals to achieve in exchange for credit points.

MevoFit also claims that the band takes into account a woman's monthly hormonal changes and variable heart rate during menstruation cycles, and that women burn calories differently than men. According to the company, men tend to have more muscle mass than women, and so their metabolisms are anywhere between 3 and 10 percent higher than women's. The computation of calories burnt is done within the app, the company says, factoring in parameters such as age, gender, weight, and height.

MevoFit claims 7 to 10 days of battery life for the MevoFit Slim + HR, and with our moderate day-to-day usage, the tracker seemed to run for only four days. However, it only took about two hours to fully charge the MevoFit Slim + HR. Talking about battery life, the Android app forces users to turn off battery optimisation in the Settings menu. This depletes the phone's battery quicker than usual, and we'd recommend that you sync the app only when necessary.

The biggest disappointment for us was the charger. The MevoFit Slim + HR has pins at the back right next to the heart rate sensor, and you get a clip-on charging dock in the box. The charger needs to be placed in a specific position for the tracker to begin charging. A slight misalignment could leave the tracker uncharged even hours after plugging it in.

Even worse, if you misplace the charger, you'll have to buy a whole new MevoFit Slim + HR. That's quite disheartening. The company should at least sell replacement chargers separately.

In our step counting test, we found the MevoFit Slim + HR to fall slightly short in terms of accuracy. We counted 1,000 steps manually while walking around, and the band recorded 988 steps. It isn't as accurate as the Mi Band 3 which was nearly spot-on. However, the MevoFit Slim + HR recognised when we were driving, riding, and sitting almost immediately, and stopped the counter automatically. The Sports Mode lets you track cycling, rope skipping, cycling, football, and even yoga, and gives you real-time heart rate readings when exercising. Heart rate is measured continuous and it can also be measured manually at any given time.

To test its distance tracking capabilities, we took the MevoFit Slim + HR for a 1km run, and at the end of it, the band showed that we had covered a distance of 1.13km (we calculated the distance using the odometer of a bike). This minor deviation is forgivable considering that there's no built-in GPS and the band relies on the paired device.

The heart rate sensor seemed to work accurately, and we compared its readings with those from a Mi Band 3 for reference. Other notable features include wrist-lift detection to automatically turn the display on, weather forecasts, and remote camera control for your smartphone, with the capacitive button acting as the shutter release.

This female-centric fitness band is IP67 certified, and we took it for a bath, and even washed dishes while keeping it on our wrist. It withstood all of our activities and no damage was noticed. It comes with its charger, a warranty card, and an instruction manual in the box.

Verdict
The MevoFit Slim+HR fitness tracker is priced at Rs. 3,490 and is available via Amazon.in and other websites as well. There are some good alternatives priced under Rs. 2,000, such as the Mi Band 3, which offers similar features — apart from period and ovulation tracking — and is gender-neutral.

If period and ovulation tracking are important to you, there are plenty of free apps that do the same things and give you reminders on your smartphone. It's also worth noting once again that replacement chargers are not readily available online as a separate purchase, and the design of the clip-on dock isn't user-friendly in the first place.

Without comparing it to other options out there, the MevoFit Slim+HR seems to have a lot to offer with many capabilities jammed inside a tiny package including a heart rate sensor that works well and a step counter that isn't too far off the mark. It also features period and ovulation tracking, and calorie counting that is supposed to be attuned to women's metabolisms. The app has tips on beauty and health that we found to be informative as well. If you can ignore the difficulties with the charger, you can consider this for purchase.