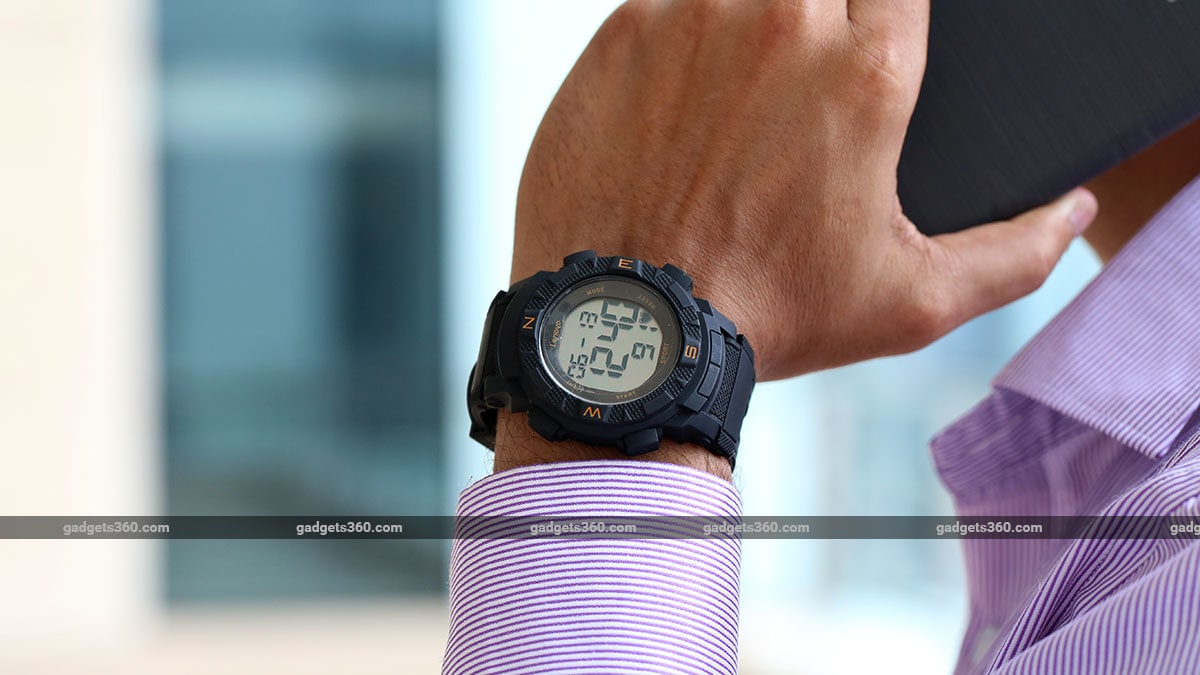 Fitness wearables are a dime a dozen now, and multiple manufacturers have attempted to make their own, because a lot of consumers like being able to keep tabs on their fitness. We have tested many of the popular fitness wearables in the market, and the Xiaomi Mi Band 3 is one that is easy to recommend. Smartphone maker Lenovo already has its fitness wearables, the HW02 Plus and HX03F, in the market and has now introduced a new model called the Lenovo Ego. This new wearable device looks more like a smartwatch than a fitness band. At a price of Rs. 1,999 is it capable of giving the Mi Band 3 a run for its money in the budget segment of the smart wearables market? We put it to the test.

The Lenovo Ego looks nothing like most of the fitness bands that are available in the market. Instead, Lenovo has designed it to look like a rugged digital watch. It has a circular dial and four chunky buttons around it. While the watch looks bulky, it is relatively light, weighing just 45g.

The Lenovo Ego is light and weighs just 45g

The Lenovo Ego has a 1.6-inch anti-reflective monochrome display which is legible when outdoors. This isn't a touchscreen, so all the information is accessed by pressing the buttons on the side. The dial has compass direction markings on it but these are for aesthetics only, and do not tie in to anything that is shown on the display.

Lenovo has used a rubber strap for the watch, and it is of decent quality. This rubber strap cannot be replaced like the ones on some of the other fitness bands in the market. Since it is a watch-style strap with a buckle, getting a proper fit was easy.

There are two buttons on the left side of the watch. The upper one is the ‘Light' button for the backlight, which lets you read the watch face in the dark. The other is a ‘Start' button to turn off the watch, which doesn't seem particularly useful. On the right, the upper ‘Mode' button cycles between information screens for your step count, distance covered, calories burned, and duration slept. The ‘Reset' button cycles between the heart rate and stopwatch screens. These buttons are big but we found that they lack proper feedback, which caused us to second-guess our inputs.

At the back of the watch are a heart-rate sensor and pogo pin connectors for charging. The charger has two pins and magnets that help it latch onto the watch. We weren't happy with this mechanism as we had to line it up carefully every time we needed to charge the watch (thankfully, not that often). A slight nudge was enough to dislodge the charger.

Since the watch is light, we found it comfortable to wear for long durations. It was also easy to sleep while wearing it.

You'll need to use the Lenovo Life app to set the Ego up with your smartphone. The app is available for both Android and iOS devices. We used this device primarily with a Google Pixel 3 (Review) unit for testing. The Ego also vibrates to inform you of incoming calls and notifications like a basic wearable, but that's about it. You can see ‘Message' for an incoming message and ‘Call' for calls, and there is no information beyond that. You'll have to pull out your phone to actually see a message and respond to it.

Lenovo does have some experience with fitness bands and it has put that to good use with the Lenovo Ego. The default screen of the Ego shows the date, time, and current heart rate, and this device is capable of continuous heart-rate tracking. It also shows a Bluetooth icon when the Ego is connected to your smartphone. You can cycle through more information on the watch by pressing the Mode and Reset buttons.

Let's talk about the companion app. The Lenovo Life app shows all the fitness data that the Ego collects, but it isn't as well designed as the Fitbit companion app which we used during our Fitbit Inspire and Inspire HR Review. At a glance, the app gives you information including the number of steps taken, sleep tracking data, and heart rate data.

The Ego logs heart rate information at 5 minute intervals and displays the average for the day. We couldn't find a way to turn off continuous heart-rate tracking. You can tap at see the entire graph. Sleep tracking data shows you information like Deep sleep, Light sleep, Average heart rate, and awake time. It also informs you about the quality of sleep and suggests you to take action in case it isn't adequate.

The app has a discover tab that suggests exercises you can do, and helps you create a workout plan. The next tab has some information about Lenovo fitness products, but some sections were either incomplete or had not been updated since April 2018. The last tab lets you configure your profile and select the apps that notify you. It also has a photo function that lets you use the Ego as a remote shutter button, but only within the Lenovo Life app itself. You can't take advantage of this in your default camera app.

We tested the Ego for nearly three weeks, tracking steps, distance, and sleep with it. We counted 1000 steps manually to check the Ego's accuracy, and it registered 1002 steps which is quite good. We were happy to see that the device did not register steps when we were travelling in a car or riding a motorcycle, something that several trackers do.

To check distance accuracy, we walked a stretch that we knew was exactly 1km. The Ego registered 0.95km. This is reasonably accurate, considering that the device does not have its own GPS receiver. With that said, if you are serious about tracking runs, we would recommend not completely relying on devices without GPS like this one.

We also used the heart-rate sensor while running on a treadmill and observed that the Ego would return readings in the same range as the treadmill. However, the heart rate sensor wasn't always consistent. We would find the Ego showing 80bpm while our heart was racing right after a cardio session., Readjusting the band did help in a few of these instances.

Lenovo claims that the Ego offers 20 days of battery life per charge, but we got 10 days worth of usage out of the watch with continuous heart rate tracking on, and with vibration alerts for incoming calls and messages enabled. Charging took close to an hour using a 10W charger.

The Lenovo Ego is a fitness band in the shape of a rugged digital watch, but isn't as functional as a smartwatch. It has a good display that is usable in different light conditions. We found its step, distance, and sleep tracking to be accurate enough for this affordable device. Heart rate tracking was accurate, but it wasn't consistent.

While the Ego does perform its tracking functions well, it shows only very basic notifications compared to the Xiaomi Mi Band 3. The starting price of Rs. 1,999 is exactly the same as that of the Mi Band 3. If you want something that doesn't look like a fitness band but works exactly like one, the Lenovo Ego should be the one to pick. However, if you want to be able to read notifications on your wrist and know who's calling, the Mi Band 3 is the way to go.