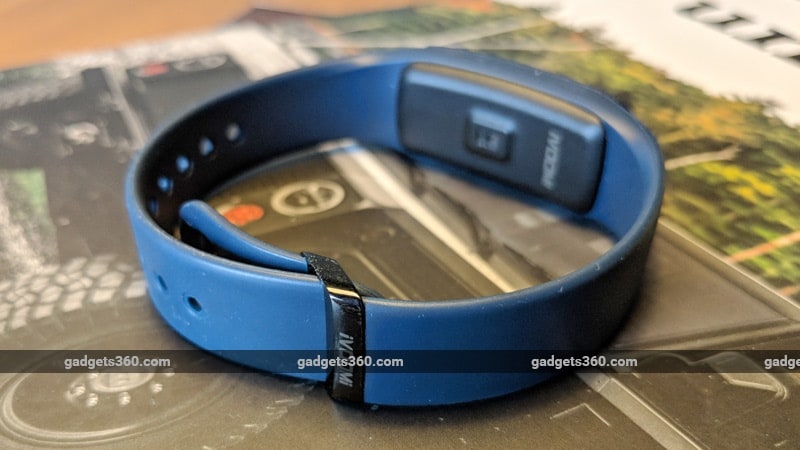 Fitness bands have become a popular tech accessory and anyone wanting to track their activity levels can buy one. Manufacturers have noticed this trend and many are now offering fitness bands in their portfolio. We have seen big brands such as Lenovo selling the Lenovo HW02 fitness band, and now iVoomi is the latest smartphone maker to launch such a product. Priced at Rs 1,999, it boasts of features like a pollution tracker that informs you about the Air Quality Index of your area. Is that enough to help it stand up against popular options such as the Xiaomi Mi Band 2? We review to find out.

The iVoomi FitMe band consists of two parts: a removable capsule that houses all the guts of the device, and a silicone strap. The company has opted for a clasp design that is similar to that of the Apple Watch. It requires you to slide the strap into the buckle and lock it into place. It's quite sturdy and it never came undone during our review period. The capsule has a USB plug on one end that plugs directly into a charger or a computer with a USB Type-A port.

The capsule is curved to help it fit on the hand and has grooves on the side to fit snugly into the silicon band. This ensures that the device does not pop out of the band during use. The band has IP67 rating making it dust and water resistant. However, since the front of the capsule is pretty much exposed, you will have to be careful to avoid scratches.

The tracker has a display and a capacitive button that can be used to cycle through pages of information. Turn it around and you will see the heart-rate sensor on the bottom. While at idle, the band displays the time, date, battery level, and Bluetooth status. Tap the button and you will see the step count, calories burned, distance travelled, current heart-rate, and Air Quality Index reading, along with the temperature at your location.

Just like other fitness bands in the market, the FitMe has a raise-to-wake function that lets you check the display. During our review period, we found that this worked quickly and fairly consistently. We went for a walk with Runkeeper and Google Fit running on our Google Pixel 2 XL (Review) and found that at the end of 1km, the band had registered 0.9km. Step tracking isn't very accurate and we found that it registered fewer steps compared to a Xiaomi Mi Band 2 worn on the same hand. We also tried manually counting the steps we took, and found that the FitMe registered around 89-92 steps for every 100 we counted.

The heart-rate sensor at the back is fairly accurate and delivers results in the same range when compared to the Mi Band 2. However, it isn't as quick. The FitMe has an Auto Measure option which measures your heart-rate at 15-minute intervals throughout the day and displays the results as a graph. You can also use the band in workout mode which keeps the heart-rate sensor on constantly. In this mode, it shows the heart-rate at first glance, and you can tap the capacitive button to check your steps, distance, and calories burned.

Sleep tracking with the iVoomi FitMe was accurate, and the light sleep and deep sleep readings were in line with what the Xiaomi Mi Band 2 recorded. However, it had issues when we woke up in the middle of the night. While the Xiaomi Mi Band 2 continues tracking sleep when you go back to bed, the iVoomi simply stops. iVoomi says that the FitMe can track light and deep sleep along with periods of wakefulness in between, but in our experience, it failed to recognise this. If you grab a midnight snack or glass of water, you might see an incorrect overall sleep reading when you wake up in the morning.

If you are curious as to how this device measures air quality, it doesn't. Instead, it gets the AQI and temperature from the companion app on your phone. iVoomi has tied up with an unnamed provider to display AQI data. If your city isn't supported, the band will show you data for the nearest city. Since iVoomi hasn't disclosed its source for AQI data, there is no way of knowing which cities are on that list, and thus whether the information you see is even accurate for your location.

Battery life isn't all that great, and one full charge will last you for three and a half days with the heart-rate sensor on. Switch the Auto Measure mode off and you should be able to extract a little more life out of the battery. While you will need to charge the band every 3-4 days, you won't need to carry any proprietary charging cable or dock around with you, thanks to the integrated USB Type-A plug. It takes a little over an hour to charge fully, which is acceptable for a band, but we wish that the battery life had been better.

Apart from fitness metrics, you can use the band to notify you of incoming messages, calls and emails, although only a few messaging and social apps are supported. The list only includes Facebook, Instagram, Twitter, WhatsApp, Line, QQ, WeChat, and Skype. The vibration motor is strong enough to draw your attention and you can also customise the intensity if required. When you get an incoming call, the band shows you a call symbol and vibrates only five times, unlike other models which keep vibrating and can also show the caller's name or number.

The FitMe app is easy to use and has all your data laid out to give you an idea of the number of steps you have taken and your sleep patterns throughout the week. You can also set targets in terms of steps, or set a reminder that buzzes the band when you have been inactive for a long time. The FitMe app allows dual logins, which lets someone like a fitness trainer access your data. Also, unlike the Mi Band 2, you cannot customise what information you see on the band, which would have been helpful.

Verdict
The FitMe is the first fitness band from iVoomi but it doesn't seem completely ready to go against the current market leaders. The strap design is good, but step and sleep tracking could do with some fine-tuning to deliver more accurate results. The pollution tracker function is nothing but information that the FitMe app pulls from the Internet.

Battery life is 3-4 days depending on how you use the band, which is low compared to the 20 days that the Xiaomi Mi Band 2 is capable of. Overall, the iVoomi FitMe is an average performer and needs improvements. If you are looking for a fitness band on a budget, the Xiaomi Mi Band 2 and Ambrane Flexi Fit are good alternatives.