Is the best wearable for fitness enthusiasts that's priced under Rs. 15,000? 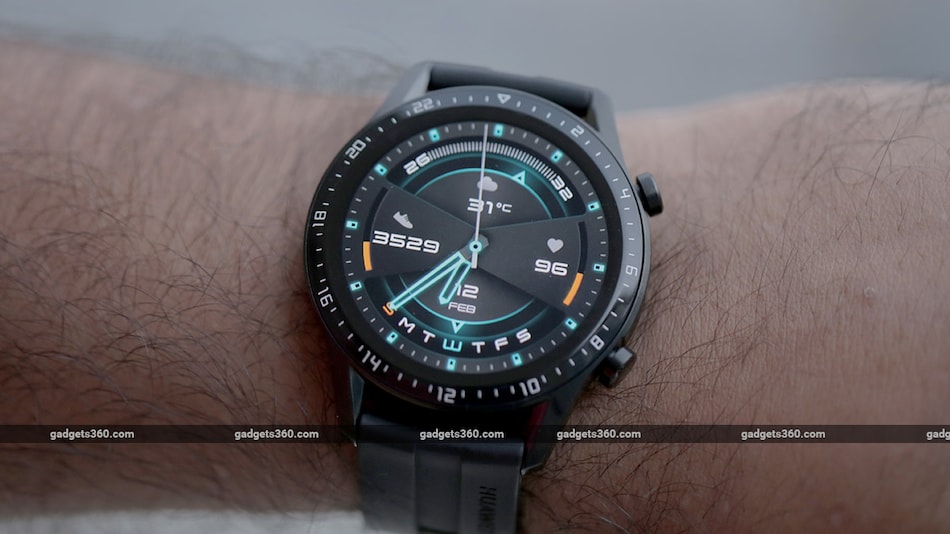 Huawei has been in the wearables space for quite some time now, and has been steadily pushing out new smartwatch models in India. The company launched the Watch GT early last year for Rs. 15,990, and there's now a successor aptly called the Watch GT 2. Surprisingly, this watch packs in more features but is priced lower, at Rs. 14,990. The new smartwatch promises 14 days of battery life and has a speaker that'll allow you to take calls on the watch itself. Should you plonk your money down on the Watch GT 2? We review it to find out.

Huawei offers the Watch GT 2 in two sizes; 42mm and 46mm. Surprisingly, the design is a little different for the two variants. The smaller one looks a lot like the Samsung Galaxy Watch Active (Review) with a plain casing, while the bigger variant has markings around the bezel that give it a sportier look. We have the 46mm variant for this review.

The Huawei Watch GT 2 has two buttons on the right side. These protrude quite a bit but are easy to press and offer good tactile feedback. The upper button is to go back in the UI, while the lower one can be assigned to any feature on the smartwatch. Between these two buttons is the speaker grille, which isn't very easy to spot.

The Watch GT 2 has two buttons on the right side.

Huawei has used wide 22mm straps for the Watch GT 2. These are user-replaceable, and you can pick any standard 22mm strap of your choice. The base option comes with a black Fluoroelastomer strap that feels comfortable when worn.

The 1.39-inch AMOLED display sports a 454 x 454-pixel resolution which is higher than that of the Samsung Galaxy Watch Active 2, which we reviewed recently. There is no pixelation, and the smartwatch has auto-brightness which helps it adjust to changing ambient light conditions.

At the back of the device, you'll find the heart rate sensor along with the charging mechanism. The Watch GT 2 does not support wireless charging like the Samsung Galaxy Watch Active 2. Instead, it uses a magnetic dock with pogo pins. The magnets on the charger help it to securely latch onto the Watch GT 2. Huawei's charger uses a USB Type-C port, so if you have a smartphone with a Type-C port, that's one less cable you'll need to carry.

The Huawei Watch GT 2 is powered by the company's Kirin A1 processor. Huawei developed this chip specifically for wearables, including smartwatches and wireless headphones. It competes with the Snapdragon Wear 3100 SoC which is used by most WearOS devices, and the Exynos 9110 SoC which powers the Samsung Galaxy Watch Active 2.

Huawei does not specify the amount of RAM available, but does say that there's about 2GB of storage on the watch. This can be used to store audio files on the watch itself, which can be streamed directly to a Bluetooth headset.

There is support for Bluetooth 5.1 along with GPS which can be used to track outdoor runs. The device is water resistant up to 5 ATM, so you will be able to take it for a swim. The 46mm variant is also capable of receiving calls over Bluetooth.

Huawei runs proprietary software on the Watch GT 2, and it is compatible with devices running Android 4.4 (or later) as well as iOS 9 or up. Unlike WearOS devices and Samsung's Galaxy Wearables, you don't have the option to download new apps on the Watch GT 2, which somewhat limits its capabilities. While this would seem like a huge cause for concern, Huawei has included a large number of essential features on the device.

Just like most other smartwatches, the Huawei Watch GT 2 is capable of step and distance tracking. It also has its own GPS for tracking distance. Heart-rate, sleep, and stress monitoring are also supported (though stress tracking works only when paired with Android smartphones). There's also workout logging, and a few workouts are pre-configured. Huawei has managed to cover the basics, but the workout list is not as expansive as Samsung's on the Watch Active 2.

You will need to download the Huawei Health app to sync the Watch GT 2 with a smartphone. The pairing process is simple and quick. Sleep and heart-rate tracking are enabled by default. Stress tracking needs to be enabled manually, through the Health app on an Android smartphone.

The Huawei Watch GT 2 has a crisp display that is viewable under direct sunlight. The ambient light sensor is quick to bump the brightness up when needed. Huawei does not offer an always-on mode on this smartwatch but you can keep the display on for up to 20 minutes after use. This might disappoint people wanting an always-on display. The watch is quick to wake up when you raise your hand, and the display goes off when you lower it.

Performance could have been better, as the smartwatch feels slow when scrolling through the UI, compared to the Samsung Galaxy Watch Active 2. If you swipe quickly a couple of times, the Watch GT 2 might fail to register the last one. It also takes some time to open submenus, which might get annoying when you're in a hurry. While using the watch at a casual pace we did not notice these issues.

The Watch GT 2 buzzes to alert you to incoming notifications, and you can set the intensity of the vibration. You can see alerts on the watch but cannot interact with them, so for example if you were hoping to be able to reply to WhatsApp messages quickly using the watch, you'll be disappointed. What you can do is take calls on the watch. The inbuilt speaker is fairly loud but you will have to move it close to your ears to hear callers clearly.

We put the Watch GT 2's fitness tracking functionality to the test by walking exactly 1 km, and the watch reported 1.02km which is a good result. The Watch GT 2 utilises GPS to track distance, and the route we took was reflected on a map. To check step counting accuracy we manually counted 1,000 steps as we walked, and the watch registered 994 which is also acceptable. We can say that the Huawei Watch GT 2 is good at step and distance tracking.

Sleep tracking was accurate on the Watch GT 2 as well, and it recorded our bedtime correctly. The app shows a graph and assigns a score to the quality of sleep. It also breaks down your sleep patterns into deep, light, and REM sleep.

Heart-rate tracking was consistent with the readings we got using a Mi Band 3 (Review) and a treadmill on two different occasions.

Huawei does not state the device's battery capacity, but does claim two-week battery life for the 46mm Watch GT 2. This might seem too good to be true, and it isn't. However, the Watch GT 2 still managed a respectable 10 days with the default settings, which is much better than most other smartwatches out there. If you enable stress tracking and log workouts actively, expect the battery life to go down. Charging was quick in our experience, and it only took a little over an hour to charge the battery completely. The charger is compact and easy to carry around.

Is Realme C3 Price Likely to Usher in a Budget Smartphone Revolution?
Apple to Reopen Some Stores in Beijing Today, Company Site Says