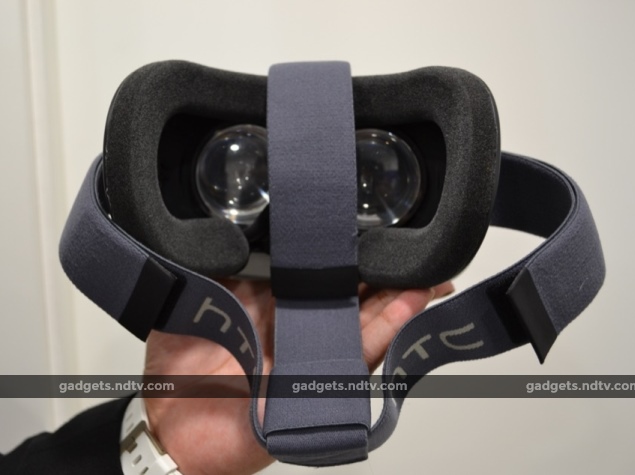 At the Mobile World Congress in Barcelona, HTC unveiled its virtual reality headset, the HTC Vive, made in collaboration with Valve. It's still very much a work in progress, but the developer edition of the headset is expected to be released this spring, with a consumer edition to follow near the end of 2015.

HTC has been silent about many of the exact specifications of the headset that's also being showcased at the ongoing Game Developers Conference taking place in the US, but in Barcelona the company offered us the chance to spend some time inside the Vive virtual world.

Conceptually, the HTC Vive is pretty similar to the latest iteration of the Oculus Rift, the Crescent Bay prototype. This is the third-generation of the Rift that we know about - the first iteration was launched as the Dev Kit, while the second generation was sold as the Dev Kit II. This added a camera to track head movement, instead of relying only on accelerometers, giving you fine control over your head movement.

Crescent Bay was an equally big step forward, using a camera to place you in a virtual space, so you can walk around freely. The HTC Vive VR does the same thing, but it has a few additional tricks up its virtual sleeves.

In September, we got to try the Oculus Rift Dev Kit II for an extended period, and what we saw was a device brimming with potential. That's not to say that the Rift was without shortcomings, but as a work in progress it held tremendous promise.

Perhaps most importantly, there was simply no competition to speak of. Samsung launched the Samsung Gear VR headset in September and started selling it in December. Of course, the two devices aren't really comparable - the Oculus Rift is a much more robust experience that lets you fully interact with the virtual world, while the Samsung Gear VR seems more suited to simpler experiences like interactive movies in virtual reality. Plus, the Gear VR was made in collaboration with Oculus so the two can't be seen as competing directly anyway. 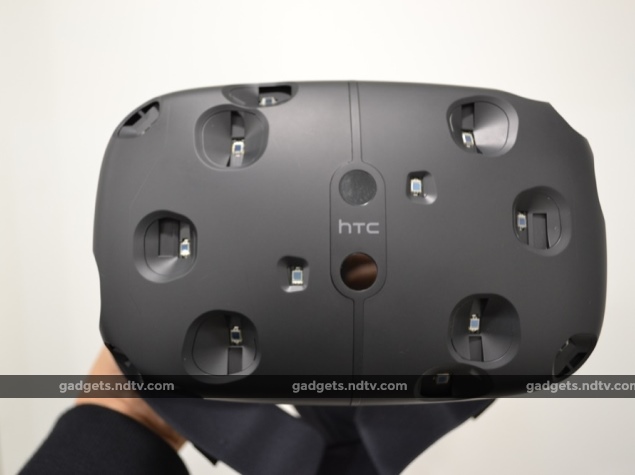 HTC's Vive VR headset, made in collaboration with Valve, is definitely a serious Rift competitor. As fan of VR, we're very happy to see a real competitor emerge, because it will only help to speed up development of this technology - Oculus has not felt the pressure to actually bring a product to the market because there hasn't been any real alternative - Valve's backing means that Steam's distribution will help disseminate games for the Vive VR, and signals the headset will get strong software support.

The HTC Vive looks a lot like the Oculus Rift - the design is a little tighter, and doesn't seem as adjustable as the Rift - but otherwise, there's a light plastic frame studded with sensors on the outside, and on the inside you see two circular lenses. The whole thing is fantastically light, and we weren't really conscious of its weight at all.

The Vive uses two cameras to mark out an empty space that works as the play area - according to a HTC representative you'll get to play in a space of 3x4 meters. When the cameras detect a wall, a grid pops up in front of your eyes so you know you can't go any further. The effect is excellent, and really makes you feel like you're in Star Trek's holodeck.

We haven't tried out the Crescent Bay prototype, so we can't accurately compare the two, but there is no denying that the Vive VR is a huge step up from the Dev Kit II. According to HTC, the headset uses two 1200x1080 pixel screens, and while the company has not disclosed the Field of View (FoV) of the headset, it is certainly high enough to create a sense of presence. We could see movement at the very edge of vision and turn to track it smoothly - there was no sense of viewing the world through a pair of goggles, as happened with the Dev Kit II. Audio in the developer headset is coming from headphones plugged into a standard 3.5mm jack, but according to HTC, the final consumer version of the headset will have integrated 3D audio.

Finally, there's the controllers - Oculus CTO (and id Software co-founder) John Carmack has talked about how controllers are the "missing link" in virtual reality - the HTC Vive comes with two controllers that are currently wired, but will be wireless for the consumer edition. The controllers look like batons, and they are used in a number of ways. For one thing, positional tracking allows them to be used to track the movement of your hands in VR. The tracking is precise and without lag. We spent a good few minutes just marvelling at our hands moving around. 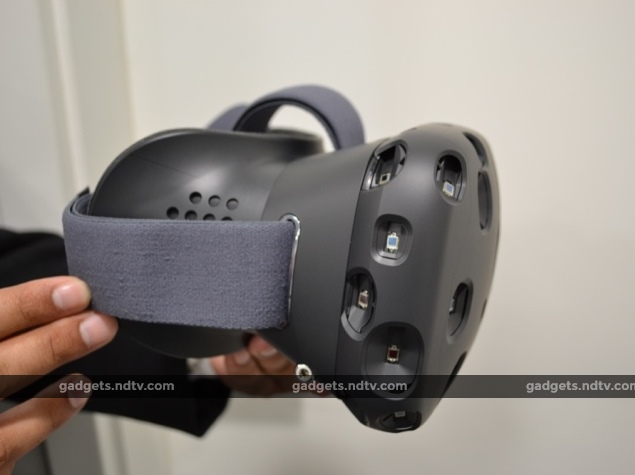 There are also triggers under your index fingers, and twin grip triggers in the sides of the controllers that you can press with your palms. Under your thumb are two clickable touchpads that can be used to scroll through menus, reminiscent of the design of the Steam Controller. We were able to use the controller effectively for a number of different things such as drawing, exploring the environment, picking up and using objects. In all the demos we were trying, the controllers were shown in the virtual environments, which greatly helped with the sense of realism.

The only issue is that your sense of proprioception is thrown off a little by the fact that the controllers are pretty big, but the visuals you see on "screen" tended to be small. Add to that the fact that you quickly forget that you're wearing a headset, and actions that have you bringing your controller close to your head lead to hitting yourself in the face unintentionally.

In one of the demos, you're able to pick up objects in a kitchen, and the temptation to just pick things up and lift them to our face to look at them closely was irresistible - but it meant that we kept hitting the headset with the controller, no doubt making the HTC executives worry about their prototype's safety.

To test out the headset, HTC ran us through several short demos - all in all, we spent around 30 minutes in VR, though the whole experience was so smooth and engrossing that we could swear it felt like just five minutes.

To transition between demos, the screen blanks to a white room, like the scene in the Matrix where Neo asks for guns. The transitions are all smooth and slickly thought out, to evoke a notion of virtual reality that we can all claim to be at least slightly familiar with. 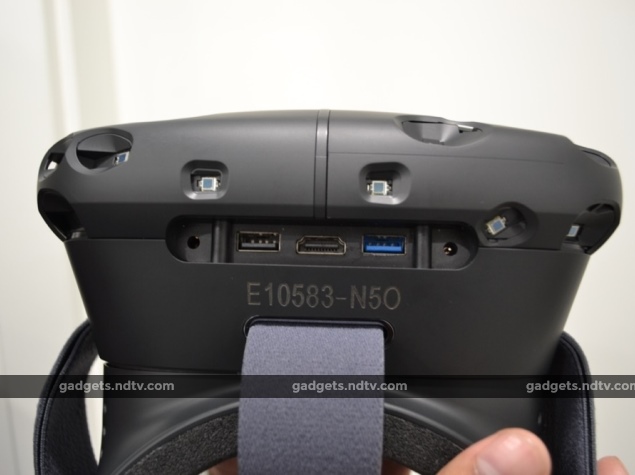 One of the first demos placed us on a shipwrecked boat underwater. You could walk around and look at the hull and the other objects, or wave your hand to shoo away the small fish that were swimming nearby. It was a smooth experience, and you could lean forward to look over the edge of the hull. Then, suddenly, out of the very corner of our eyes, we saw a shadow moving, and we turned to see a huge blue whale swimming towards us. Very quickly it fills up the screen, and then it is swimming by, and all you can see is its eye. As it passed us, we instinctively ducked to avoid being knocked over by its fluke.

The next demo was a cooking simulator, where we picked up some fruits and vegetables, used a knife and burned some meat in the oven. The movements with the controller were precise, but the problem here was that the act of cooking is to familiar, and the physical disconnect between holding large plastic controllers in both hands, versus the visual you see of a piece of bread and a tomato in your virtual hands, was a little disconcerting.

After that, we were taken to the Aperture Science Labs, where GLaDOS ordered us to repair a robot. The whole demo was hilarious, and made us really want to play Portal again. Preferably in virtual reality, because this whole demo was amazing. At the end of it, the floor falls away to incinerate the robot we "ruined" and we stepped back to get away from the falling tiles, backing right into the wall.

Another demo put us in a Godlike position above the world of a tower defence game. Tiny soldiers were dug into defensive positions, shooting away furiously at approaching tanks. Little eruptions went off around our ankles, and then we sat down on the floor and took a good look at the toy soldiers. It was a beautiful experience, and shows how virtual reality can be used to make games that are not set in the first person too.

The final demo was about painting, and it was the most beautiful experience that also showed off how accurate and precise the controllers are. In this demo, the left hand was the palette, while the right hand was a paintbrush. By using the touchpad on the left hand, you could change tools and colours, while you could "draw" with the trigger on the right hand controller. 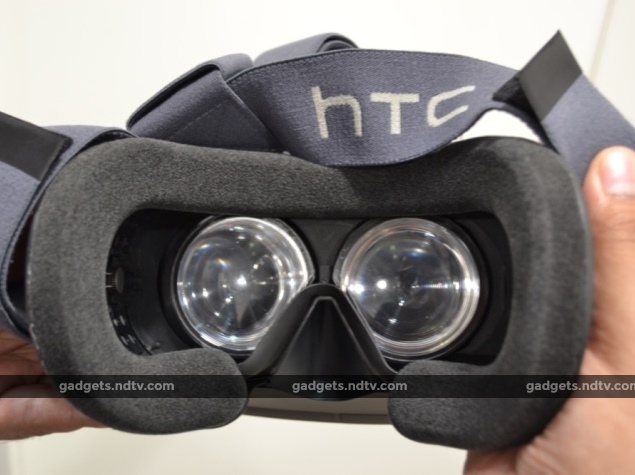 You could draw with paint, oil, fire, snow and other "brushes" and in this neon-lit demo, we drew beautiful lines - well, they seemed beautiful enough to us - in three dimensions. It was like an idealised version of the 3Doodler in a way that was only possible in 3D. We drew strange shapes and walked through them, and drew arcs of snow which we could then stand under. The experience was incredibly compelling and we wish we had much more time to experience these various demos.

As it was though, the short time we spent with the headset was still enough to make us desperately want one, and we can't wait to see the consumer version. With that said, there are still some issues that are worth talking about.

For one thing, as of now, the HTC Vive is a wholly wired affair. We had a thick cable of multiple wires wrapped around us - the controllers, camera, headset and earphones all had wires coming out of them, and while we were walking around fairly slowly and carefully, there were still a couple of times where we came close to tripping. The consumer version will be wireless according to HTC, but we have to hope that this won't introduce any latency. Lag between physically experience a motion and seeing it happen can cause motion sickness and destroy the sense of actually being there, so it is essential that the consumer version have minimum latency.

Secondly, even if the HTC Vive is priced competitively against the Oculus Rift, that will mean a $300 investment on what is essentially just one part of the entire experience. That's because the Vive itself won't be enough to run games - you'll be powering the software with a powerful gaming PC as well. This means that for the first generation at least, virtual reality is going to be an expensive affair, as you'll need a powerful PC, the headset itself, and a room with at least 3x4 meters of empty space for it to work. That's a pretty high barrier to entry for now, but this holds true for the Oculus Rift as well.

What we have to hope now is that there are enough early adopters to make it valuable for Oculus and HTC/ Valve to continue developing their hardware - as we've seen with other kinds of consumer technology, future versions will get more refined, more evolved, and, eventually, more affordable. Based on our early experiences with the HTC Vive, we really hope that this is a device that will do well and lead to further development in the field of virtual reality.