Honor has made the Band 5 swim proof, but is that enough? 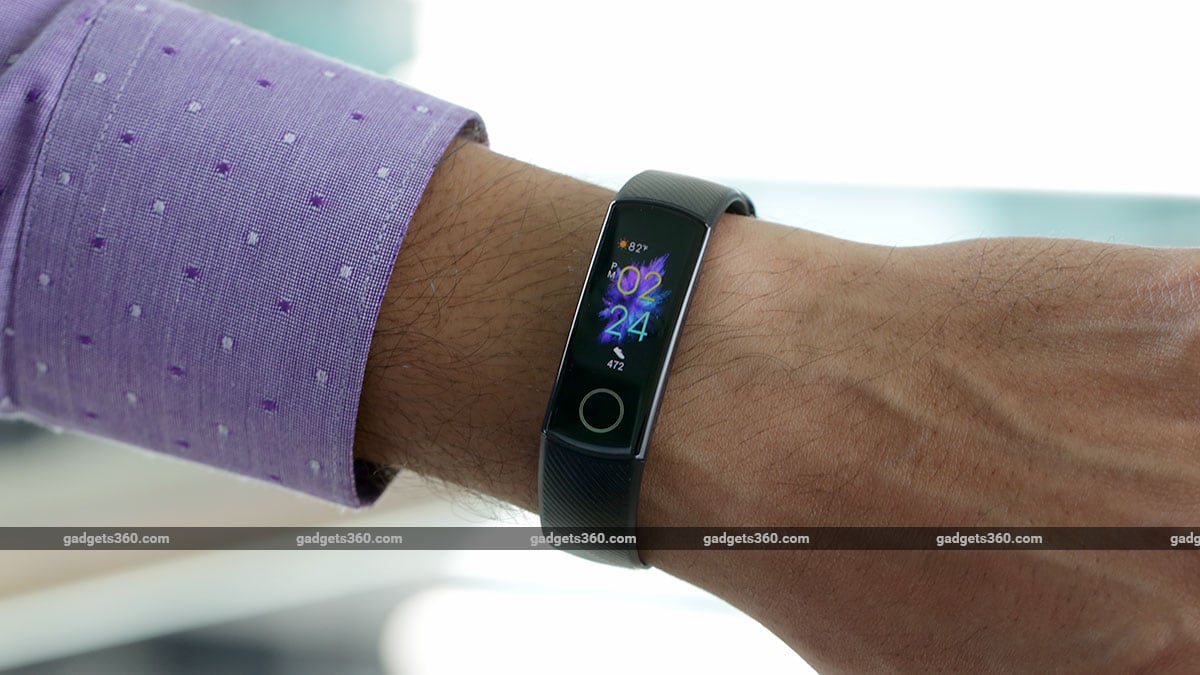 A lot of new wearable devices have launched in the recent weeks, including new models from popular brands in this space such as Lenovo, Xiaomi, and Honor. The Honor Band 5 is one such product, and it is the latest iteration in the popular Honor Band series. This new fitness tracker packs in an AMOLED display, and is capable of tracking sleep as well as heart rate. It's also water-resistant upto 50m. The Honor Band 5 competes with the Xiaomi Mi Smart Band 4, and is priced the same at Rs. 2,299. So which fitness wearable should you pick? We put the Honor Band 5 to the test to find out.

Honor hasn't changed the design of this device at all compared to its predecessor. The Honor Band 4, which we reviewed earlier this year, also looked similar to the device it replaced. Honor offers the Band 5 in three colours: Meteorite Black, Coral Pink, and Midnight Navy. We had a Meteorite Black unit for review. Honor's latest fitness band looks like a one-piece device but the straps can be separated from the main body. You can change to different straps, and we found a few colour options online.

The strap that comes with the Honor Band 5 is made of high-quality silicone, and has a watch-style clasp. This makes the device easy to wear and reduces the chances of it coming off. We did not notice any unusual wear on the band while testing it over the course of a few weeks.

The core of the Honor Band 5 houses a 0.95-inch AMOLED touchscreen with a resolution of 120x240 pixels. Right below the display is a capacitive Home button. Just like the Honor Band 4, the Band 5 has a colour display. While this feature made the Band 4 stand out among the competition, it isn't unique anymore, as the likes of Mi Smart Band 4 also have one. This AMOLED panel gets bright enough outdoors, and you can choose from between five levels of brightness on the band itself.

At the back, you'll find the hardware for heart-rate tracking. This sensor protrudes very slightly but isn't uncomfortable when wearing the band. There are two pins for charging, but a proprietary clip-on charger is needed. This charger has a Micro-USB port, and Honor also ships a short cable to help you charge the device.

Since the Honor Band 5 has a touchscreen, you have to swipe to navigate within the UI. You can tap the screen to make a selection, and swipe right to go back. Tapping the capacitive button takes you to the home screen. The Honor Band 5 also has multiple watch faces that you can choose from. Each watch face displays different types of information. Tapping on a face shows you the device's connection status and battery level, and the current weather.

Honor ships a proprietary charger with the Band 5

The Honor Band 5 has a simple, easy-to-use UI and shows you the number of steps you've taken, your heart rate, sleep duration, workout details, and notifications. The Band 5 also buzzes to remind you to move if you've been inactive for some time. This is a very useful feature. The workouts tab has nine workout options including a free training mode. While it would be too much to expect more granular and specific workout tracking, like the Samsung Galaxy Watch Active (Review) offers, the Honor Band 5 will let you track runs, both indoors and outdoors as well as swims. A recent update also added music controls and SpO2 (blood oxygen level) tracking.

Honor has made the Band 5 swimproof and has also added the ability to track swims, something we weren't able to test during this review. However, we had the band on for over 15 days and it did survive our daily showers.

You will need to use the Huawei Health app to pair the Honor Band 5 with a smartphone. The app is available for both Android as well as iOS. We used the Band 5 with a Google Pixel 3 (Review) for the duration of this review. The pairing process is very easy. Once set up, the smartphone is capable of pushing notifications to the band. This app also shows you information such as the number of steps taken, youe heart rate, and how long you've slept, among other things.

The Huawei Health app kept a persistent notification on our Pixel 3. While this was annoying, the app needs it to maintain a constant connection with the band for pushing notifications. This did not make a noticeable difference to the battery life of our smartphone.

The app also tracks steps using the smartphone's own sensors, independent of the steps recorded by the band. We found the step counter in the app to be inaccurate as it kept counting steps while we were riding a motorcycle. We tested the accuracy of the Honor Band 5 by counting 1000 steps while walking, and it recorded 990 steps which is good. We found the tracking to be accurate enough to rely on. Unlike the Honor Band 4, the step counter did not record steps while we were driving around.

To check the distance tracking accuracy of the Honor Band 5, we walked a distance that we knew was exactly 1km. The Honor Band 5 recorded the distance as 1.06 km which is acceptable considering the fact that there is no native GPS functionality. If you aren't looking to train professionally, this level of accuracy will probably do.

Sleep tracking was also reliable. The Honor Band 5 not only shows the duration of your sleep but also breaks it down into Deep Sleep, Light Sleep, REM sleep, and Awake periods. The Health app uses Huawei's Trusleep algorithms for tracking. Different sleep periods are also graded, and the app gave us tips on how to improve the quality of our sleep. The smartband also has a vibrating alarm function to wake you up. Setting an alarm required us to fiddle with the app. We would have liked the ability to set it from the band itself.

The Honor Band 5 is capable of continuous heart-rate tracking and has two modes to choose from. Smart mode automatically adjusts the frequency of measurements based on the your activity level. The other mode is Real-time, which keeps tracking on constantly. The latter is more demanding on the battery of the Honor Band 5. We compared the heart rate readings with those of an Apple Watch Series 1 and a Samsung Galaxy S9 Plus (Review), and we found them all to be in the same range. We also tested our SpO2 levels using the band and found the readings to be slightly off when compared to those taken by a Samsung Galaxy S9 Plus.

The Band 5 takes a little over an hour to charge

Honor claims that the Band 5 will deliver the same kind of battery life as its predecessor, i.e. 14 days. However, in our experience with heart rate tracking set to Smart, notifications switched on for calls and WhatsApp, and Huawei's TruSleep sleep tracking enabled, the band lasted us for only one full week. We also performed another battery test by switching the heart rate tracking to Real-time while keeping other settings unchanged. This dropped the battery life of the band to a little over three days. The proprietary charger took a little over 1 hour 20 minutes to charge the band completely.

The Honor Band 5 is an incremental upgrade over the Band 4, which it replaces. Honor has retained all the positive attributes of the previous model, such as accurate sleep tracking and that bright AMOLED display, and has now made the device swimproof. It also has the ability to track swims, which the earlier version lacked. However, battery life is still the same, and this is something that could've done with improvement. You'll also need to carry the proprietary charger around carefully. Priced at Rs. 2,299, the Honor Band 5 does not do anything wrong and is a solid alternative to the Xiaomi Mi Smart Band 4.