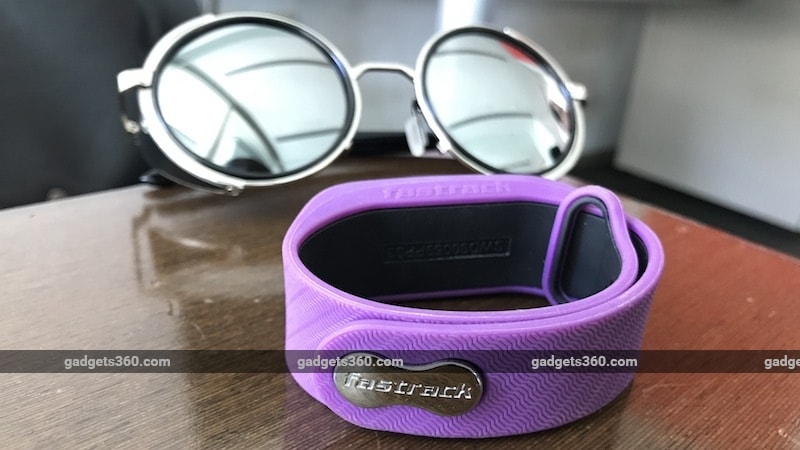 Fastrack is a well-known brand in India, owned by watchmaker Titan. Apart from watches, Fastrack sells several accessories such as sunglasses that are targeted at youngsters. The Fastrack Reflex is the company's first attempt at an affordable activity tracker for India.

On paper, the Fastrack Reflex does look quite exciting. It’s priced at just Rs. 1,995 - roughly the same as the Xiaomi Mi Band 2 - and offers activity as well as sleep tracking. It syncs with Android and iOS devices and promises weeks-long battery life. All this sounds great, and we used the Reflex for three weeks to find out if it works as advertised.

Fastrack has a lot of experience with marketing to young people. Some of that is on show with the Reflex as well. Its dual-colour band isn't a simple paint job. The outer and inner layers have different colours and feel different too. While the outer layer has a slightly rough, ridged pattern, the inner layer has a smooth rubber-like feel. This makes the band stylish as well as comfortable. We wore the band throughout the day and while we were sleeping, with no issues whatsoever. The Fastrack Reflex is quite comfortable overall.

However, we do feel that the band is a bit too wide - most likely the result of trying to accommodate the bulky activity tracker capsule. It looks like an oversized pen drive and should definitely have been slimmer. Its size makes it unsuitable for people with thin wrists or those who prefer their accessories to be sleek.

The bulky capsule does have a minor advantage - it charges via a regular USB. This means you can plug it into pretty much any laptop, desktop, or even any other adapter with a USB port for charging. Unfortunately, the display is quite average. It’s locked to a horizontal orientation, which makes it hard to check the time or step data when you’re wearing the device on your wrist. Vertical orientation would have been much better for reading text.

Even the button on the front, which is quite hard to spot, doesn’t always respond well. As much as we liked the quality of the band, the capsule itself is quite a letdown. It feels like Fastrack cut a few corners to avoid raising the price.

Let’s tackle the good parts first. The Fastrack Reflex is a fairly accurate activity tracker. Against an average of around 8,000 steps a day, data from the Reflex showed only a 5 to 7 percent deviation when compared against the step tracker on an iPhone 7. That means it’s fairly accurate with activity data.

However, Fastrack’s Reflex app on Android and iOS leaves a lot to be desired. First of all, the design is mediocre in both cases. The focus appears to have been on creating a barebones app to record data rather than an engaging way to check your activity. That’s a big deal since competitors such as Xiaomi have far better companion apps for their fitness trackers.

Secondly, the iOS app for the Fastrack Reflex is barely functional. The band didn't stay paired with our iPhone 7 reliably. Every time we opened the app, we were greeted with the “pairing request” iOS pop-up twice. After that the app pulled data from the activity tracker. This worked on Android, but on iOS it failed to download data from previous days.

The Fastrack Reflex stores activity data for 15 days but on the iOS app several days showed no activity data because we opened the app to sync only once every four days or so. We didn’t face this problem with the Android app.

Finally, we couldn’t even unpair the Fastrack Reflex on the iPhone because the app would lose its connection with the tracker the moment we hit the unpair button. We had to turn Bluetooth off and then open the Reflex app on Android when we wanted to paired it with a new device.

That brings us to another concern with this activity tracker - we couldn’t delete our activity data from the Fastrack Reflex when we were done with it. There’s no way to remove data short of just putting the Reflex away for 15 days. Data removal should be possible for those who want to sell or give away their Fastrack Reflex so that their data remains private.

Verdict
Had it been the only product in the market, we’d say that the Fastrack Reflex was a decent activity tracker. But in a crowded scene that already has products such as the Xiaomi Mi Band 2, the Fastrack Reflex is far behind its competition. The Mi Band 2 has a better display, is sleeker, offers good battery life, and even has a passive heartrate sensor. It also has slick apps on Android and iOS.

The Fastrack Reflex has a nice band and lasts around three weeks on a single charge, but other than that it doesn’t have much going for it. Even if you can live with a barebones Android app, the Fastrack Reflex is just too bulky for most people. We feel that Fastrack made one compromise too many and it needs to look at the competition to improve its product. Until that happens, the Xiaomi Mi Band 2 remains the best activity tracker to buy in the sub-Rs. 2,000 price point.