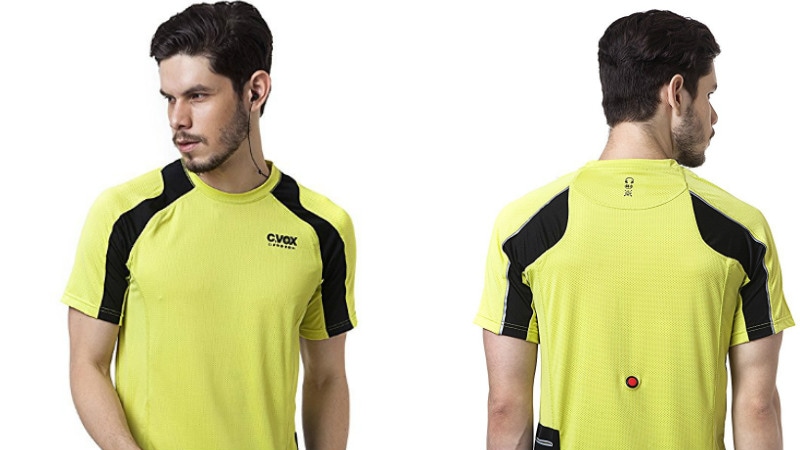 C.Vox is a relatively new brand that makes running apparel. The USP of its products is that they have built-in earphones, which might seem gimmicky but is actually a big deal for anyone who likes listening to music while running or working out. There are plenty of people who don’t run without music, and wired earphones can become annoying. Long-distance runs put a lot of stress on cables, and eventually almost all of them break. Wireless headphones are an excellent alternative but you need to charge them every day, which becomes tedious.

With the running community in India growing rapidly and full/ half-marathons in major cities attracting participants from all over the country and abroad, it seems natural that this kind of a product will appeal to some.

Design and comfort
Synthetic, moisture-wicking T-Shirts are recommended for runners because they dry quickly when you start sweating. Cotton, on the other hand, tends to absorb moisture and becomes heavy, which could slow you down and lead to skin irritation.

The ArtOfRunning turned out to be the most comfortable T-Shirt we’ve worn while running so far. It fit very well, and didn’t cause any chafing or discomfort. It has a zip on one side that lets you tighten or loosen it a bit. This is a nice touch which ensures that the T-Shirt is a snug fit for people with different body types. The other nice touch is the pocket on the rear-left of the tee, which provides a secure spot for your smartphone or music player.

These clothes are designed for runners but you can definitely use the T-Shirt for workouts at the gym as well. We used both the T-Shirt and the jacket at the gym and had no issues whatsoever. The jacket was particularly useful when we were using a machine that was placed right under an AC vent. We also used the Stylish Miler jacket during five of our runs. C.Vox says it’s an all-season running jacket but we thought it was too warm in November in Mumbai. We wore it the same month in Delhi and in October at a hill station in Madhya Pradesh, and found it to be quite useful. This isn’t meant to be a running jacket for winter, so you might want to look at alternatives if you want to run on the coldest of days or when it’s snowing.

Both products ship with an LED light covered with a rubber button that slips into a metal ring at the back. Hit it once and it blinks; hit it again and it blinks faster; hit it a third time and it will glow constantly. This is useful if you’re running in dark places - it’s like the tail lights on vehicles that help others spot you when visibility is low. The light worked fine for us, but unfortunately it fell off during the half-marathon. We think this is a good feature but it needs a much more secure way to attach to the T-Shirt and jacket.

Built-in headphones
The T-Shirt and jacket both have a 3.5mm plug in the pocket which you need to connect to your smartphone. We used it with an iPhone 5s and then an iPhone 7 for around two weeks each. We had no trouble running with either phone in the pocket, but having to use Apple’s Lightning to 3.5mm adapter with the iPhone 7 did feel a bit clunky. If more smartphone manufacturers dispense with 3.5mm sockets, C.Vox may have to alter its approach and sell iPhone- and Android-specific T-Shirts. The earphones can be detached from both, the T-Shirt and the jacket, and you need to do this before washing either of them. We washed both the T-Shirt and the jacket multiple times following these instructions and the headphones continued to work just fine post-that.

We were worried about the detachable in-ear headphones getting lost and had to constantly remember to store them in a safe place. The cables have been routed through the back of the T-Shirt with stitches around them. This never bothered us during our runs and we think the cables will last long as they don’t move around much so the chance of damage is low. Our samples came with only one set of ear tips each, which is bad if you need larger or smaller ones. For the most part we had no issues with fit, and only once, towards the end of a sweaty 21km run, did the earphones start slipping so much that we had to adjust them repeatedly. Most of our runs were between 2 and 12km long, and they were largely problem-free.

Unfortunately, sound quality just wasn’t very good. We found it particularly lacking in instrument separation and detail. The sound is a bit biased towards lows, which helps when you play running tracks with heavy beats, but not when you play rock or metal tracks. We missed a remote and mic to answer calls and skip tracks with, but we don’t think that’s a major omission as we prefer not to take calls while exercising. If you need to do that often, then this could be a big deal for you. These earphones had a decent amount of noise isolation - just about enough for us to hear traffic sounds and people around us. That’s good news, but as always, you’d do well to be extra careful while running with headphones on and try to find parks or places with no traffic for running.

It may seem as though offering wiring with the ability to plug in your own headphones is a good idea but most headphone cords are 1.2 metres long. This means that they’re a bit too long if the company provides 3.5mm port around the shoulder area. The cable will just get in the way. Another alternative is to provide a T-Shirt with hooks to let you plug in your own headphones, but you’ll have to keep taking them out when you’re done working out and that is cumbersome.

Verdict
C.Vox has done a remarkable job especially with the ArtOfRunning T-Shirt. We were surprised by the quality of a T-Shirt made by a relatively unknown brand. C.Vox needs to work on the sound quality of its earphones to make this a compelling purchase, but even if you just want a running T-Shirt, Rs. 2,999 is quite reasonable compared to branded alternatives. The jacket is quite good too, but we can’t see ourselves buying it as it felt a bit too warm during runs. We also feel that at Rs. 4,999, it is a little too expensive.