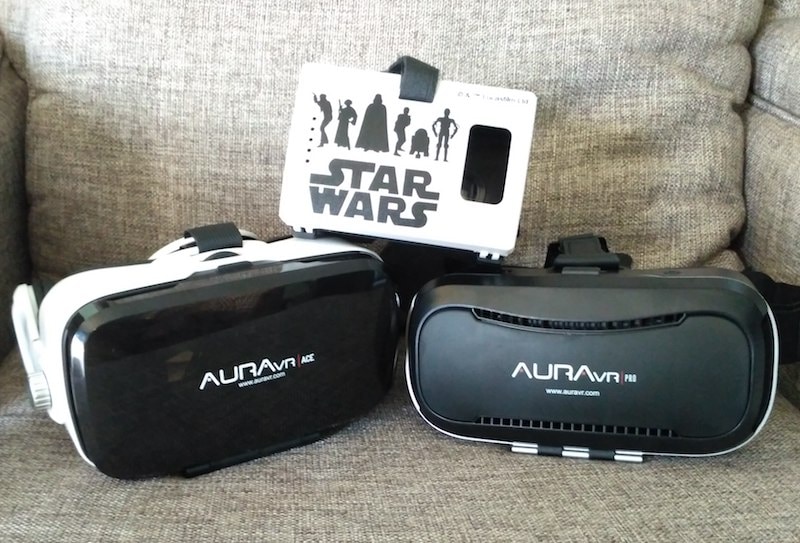 Mobile VR headsets that are available in the market remain - at the technology level - stuck in 2014, when Google introduced the world to Google Cardboard, at its annual Google I/O conference. We've seen fancy ones with straps and padding, and well, zippered designs, but in absolute terms, you can use a simple headset made out of cardboard - which might even be distributed free with your newspaper - to use the exact same apps on your phone.

Google's Daydream VR goes a step further and promises a higher end VR experience that's a lot closer to what you get with the Samsung Gear VR. However, it's only supported by a few devices right now, and only time will tell whether or not it can go mainstream.

Even so, it's interesting that a number of companies are still pushing to release first-wave headsets this late into 2016. AuraVR is one of the established companies in this space, with a range that it has been selling on Amazon. This Sunday, it's launching a new model, the AuraVR Go, which will be available on Snapdeal priced at Rs. 899. The company sent an AuraVR Go to Gadgets 360 ahead of the launch as well as samples of the other headsets in its lineup. Although we're not convinced that anyone should be buying a Cardboard-based headset with Daydream VR about to take off, AuraVR has a couple of interesting picks.

We tested all of these headsets with the Xiaomi Redmi 3S Prime, and the Moto G4 Plus (4th Gen) extensively, and also for a shorter duration using an LG G3. As the G3 packs a QHD display, the VR experience was naturally best on that device. Any phone up to 6-inches can fit into these headsets, according to AuraVR - the 5.5-inch Motorola and LG phones both fit easily. With phones smaller than 5-inches, the display can be a bit too small for good immersion, but phones of this size will still work. Almost all current-day Android phones are compatible - all Google Cardboard require a gyroscope, and the Rs. 299 V2 also requires the phone to have a magnetometer for inputs, but that's it.

Before going into the whole lineup in detail, let's take a closer look at the AuraVR Go.

Design
The AuraVR Go is made of plastic with foam rubber padding for your face and nose. The unit is curvedgently with no sharp edges, and your smartphone is held in place with a simple piece of plastic, also cushioned with foam.

There's a button at the bottom of the Go, just above your cheek. It feels somewhat awkward at first, but using it is more comfortable than holding a hand up at eye level all the time, as some headsets require.

There are two straps; one that attaches to both sides of the headset, and another that goes over your head. The AuraVR Go is comfortable to wear and its weight is distributed evenly. It's also light and easy to move around with.

There are two sliders on the top to move the lenses back or forward, and a third one in the middle to adjust the inter-pupillary distance. Fiddling with all three allows you to adjust focus, so you can use the headset without your glasses - which is a good thing, because it's unfortunately too tight to use while wearing glasses.

Performance
Since a phone is kept in place with a simple plastic holder, getting it in or out is easy. There's a little padding on both sides, so you don't have to worry about scratching the phone. Although the design is basic, it doesn't allow light in from the sides, which is really important.

The straps are comfortable and easy to adjust. As a result, you can safely go hands-free with the AuraVR Go, which always helps with immersion. There's enough range of adjustment that you can enjoy a glasses-free experience without any issues, which is always appreciated.

The construction isn't exactly premium, but the unit doesn't feel like it's going to come apart either.

Going through the Cardboard apps on our phone, we were able to enjoy the experience with no comfort-related issues wearing the headset for long periods of time. We also didn't feel our face or phone getting excessively warm (which can lead to fogging), and the entire unit was light enough that we could watch an entire movie when we wanted to.

Price
The AuraVR Go is well priced at Rs. 899 - the MRP is Rs. 1,499, which is definitely too high, but at Rs. 899 it feels like a good pick. You're not getting a high-end product here, but it's a fun toy, and it's small enough that you can slip one into your backpack.

The AuraVR family
Of course, that's only one part of what we're looking at here. Apart from the AuraVR Go, which releases on Snapdeal on Sunday, the company also has three other headsets on offer right now, with prices ranging from Rs. 299 to Rs. 2,999.

The least costly model is the AuraVR V2, which is basically a Google Cardboard headset, but made of plastic. There's no foam padding, and the plastic has a few hard edges.

It does have one big advantage over simple cardboard - it has the same two-strap system which allows the headset to be strapped onsecurely so you don't have to keep holding it in place with your hands. On the flip side, it uses the same magnet-based button system as the Google Cardboard, which doesn't work well with all phones.

AuraVR is selling these headsets with a lot of co-branding. The one we used had silhouettes of different characters from Star Wars, and the company says it has licensed all its designs. This might make the headset more appealing to some, or even an impulse purcahse, but not everyone will like the look.

Finally, there's the Rs. 1,799 AuraVR Pro. Like the (even more expensive) Ace, this is also a large plastic unit. It has a lot of foam rubber padding which creates a great seal, but also makes the device heat up a little. All in all, the Pro looks and feels the most premium of the bunch.

This one is a little heavy, and Rs. 1,799 also feels a little more than most people would want to pay. However, that's balanced out by the inclusion of a Bluetooth remote, which can be useful to have. If you don't already have a Bluetooth controller, then the Pro starts to look like a pretty good value deal. The catch is that there's no button on the body of the Pro - that certainly helps its looks, but means you have to use the controller.

The most expensive headset is the AuraVR Ace. It's available for Rs. 2,999, and is the most comfortable model in the entire line. The padding is plush, and the straps, lenses and earpieces are easy to adjust - that's right, this headset comes with built in on-ear headphones.

Near the front where you strap in your phone, there's a small 3.5mm cable which you have to run to your phone's audio socket. Obviously you'll want to turn the phone so that the 3.5mm socket is on the side with the cable - the screen will rotate, of course, so that's not an issue. In a way it's quite convenient - using wired headphones with a VR headset involves a lot of untangling. Unfortunately, the AuraVR Ace's audio quality isn't the best, and if you have spent money on good headphones, you're going to want to use them instead. That said, it really is nice to be able to just slip on the headset and get going right away, without spending another few minutes fiddling with wires.

The Ace is a little too tightly sealed, and we felt it heating up a bit. Finally, there's the question of whether or not you want to pay practically Rs. 3,000 on a headset that's based on the Cardboard technology, when Daydream is clearly superior. Although we liked this headset a lot, we find it harder to recommend.

Verdict
All in all, the AuraVR family has a lot to offer. The sleek and portable AuraVR Go seems as though it offers the best value for money. If you aren't planning on buying a new phone for some time, then you should also consider the Pro or the Ace. They might be a little on the expensive side, but good build quality and comfort help make up for that. In terms of comfort, we thought the Ace was the better of the two, but only so long as you're willing to put up with the built-in headphones.

Picking the right VR headset is getting more complicated, and we've got a guide to help you. Have you thought about it, and are you considering any of the AuraVR headsets? Let us know via the comments.

How to Use the New Designed Uber App
Apple AirPods: What You Should Know Before Buying Them