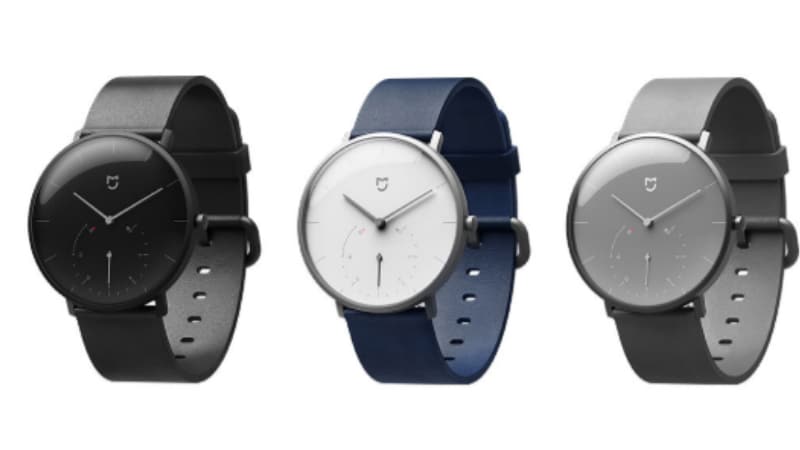 Expanding its portfolio, Xiaomi has launched a new product called the Mijia Quartz Watch. The analogue watch has a few smart features like a calorie counter and a pedometer as well, when paired with the company's app. The Mijia Quartz Watch comes with a price tag of CNY 349 (roughly Rs. 3,500) and will go on sale on July 17 at 10am in China. The watch will be made available at Tmall, the Mi Home app, and Mi online store simultaneously.

Xiaomi's Mijia Quartz Watch will be available in White, Grey and Black colour options. The 40mm dial has a cobblestone-like shape with it being slightly thick in the middle, and has 3.2mm thinness at the edges. It has a small second dial inside the large dial that shows the number of steps you've taken. The leather straps are replaceable, and the watch pairs with an app via Bluetooth (version 4.0) to perform functions like automatic time adjustment, , set call and interval reminders or set the alarm clock. Users can set up to 10 alarm reminders for the watch, and the watch will vibrate without ringing to not disturb people around, while doing its job.

The Xiaomi Mijia Quartz Watch pairs with the phone app to synchronize the time shown on the watch, according to the accurate time zone you're in, without any need to manually proofread. The watch is waterproof and weighs about 42 grams. The watch pairs with devices running on Android 4.4 and above, and iOS 7.0 and above. There's a VIP call alert feature as well, but it only works with devices that run on MIUI 9 and iOS 9 and above. There's now word on international availability as of yet.

Your Password Has Likely Been Stolen. Here's What to Do About It.