Rare Seiko WristMac, the First 'True' Apple Watch From 1988, Up for Auction

The WristMac was worn by astronauts aboard the Atlantis space shuttle. 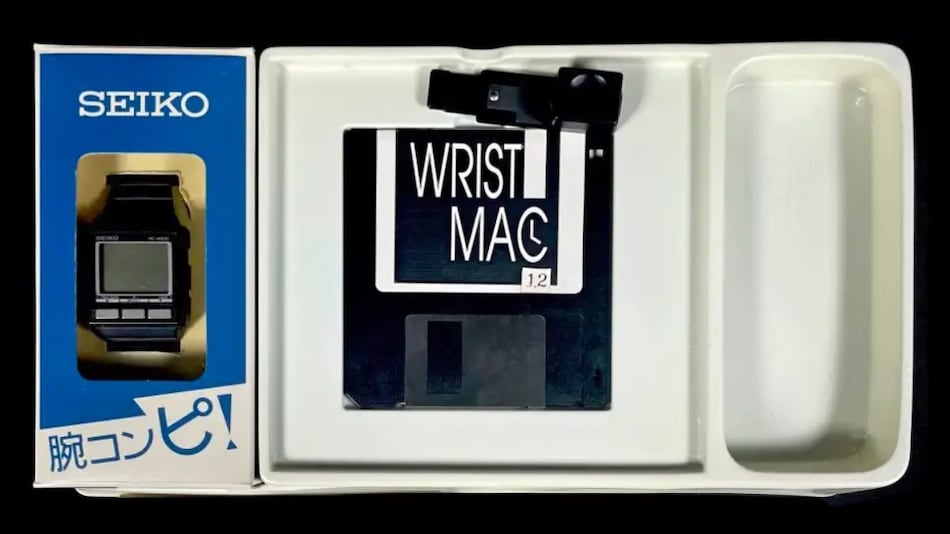 The WristMac on auction is offered in opened packaging

The Apple Watch was unveiled in September 2014, after years of rumours. It was the company's first in-house smartwatch. However, many may regard the WristMac made by Seiko 26 years earlier as the first true Apple Watch. The WristMac was considered way ahead of its time and was even worn by astronauts on the space shuttle Atlantis. Now, a rare model of the watch is up for auction. Back in 1988, the wearable was sold as an early Macintosh accessory. It's being auctioned by ComicConnect, which usually specialises in selling rare comics.

The box in which the WristMac is available includes the registration card which was never filled out, along with a tutorial and reference manual, a floppy disc containing the watch's official software, and the Seiko WristMac watch with its original cables.

The ComicConnect website has photos of the watch and calls it “extremely rare 1988 Seiko / Ex Machina WristMac.” It goes on to add that the watch was “one of the first pieces of wearable computing technology.” At the time of writing, there were 27 bids, with $800 (roughly Rs. 59,570) as the highest call so far, on the wearable.

The website also states that the WristMac watch has never been sold in nearly three decades since it was first released. The original sticker with serial number 70216 can be found in the box.

The WristMac, a programmable watch that connected to a Macintosh computer, was released in 1988 by Ex Machina and Seiko. The WristMac could record phone numbers, set one-time and recurring daily and weekly alarms, and take notes that could be saved to a disc as a text file.

Seiko was one of the first companies to use dot-matrix LCD screens on their digital timepieces, allowing them to display full alphanumeric characters. In addition to the desktop computer connectivity, several Seiko models were also compatible with small portable keyboards, allowing for data entry on the move, states a report by Gizmodo.

ComicConnect also states that on August 28, 1991, astronauts aboard the Atlantis space shuttle wore the WristMac to coordinate with the Macintosh Portable and Apple Link software aboard the shuttle as they sent the first email from space.