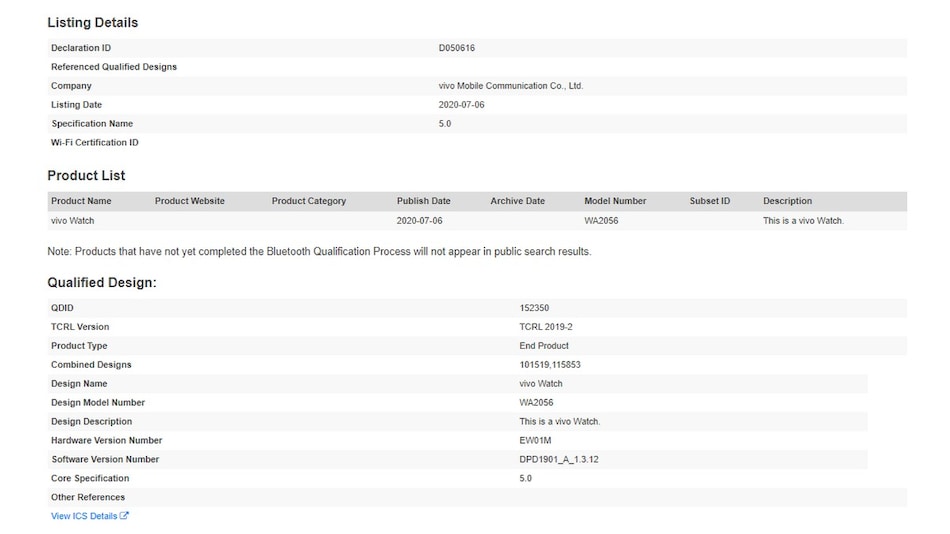 Vivo has been reportedly working on its first smartwatch for quite some time now, and its launch seems to be inching closer as the device was seen listed in the Bluetooth SIG certification database. Tentatively called Vivo Watch, two iterations of the wearable were spotted on the 3C certification platform as well. After bagging Bluetooth SIG certification, devices usually are officially announced soon. So, it can be speculated that the Vivo Watch may soon be unveiled by the company.

First Spotted by Nashville Chatter and independently verified by Gadgets 360, the Vivo Watch variant has received approval from Bluetooth SIG. Not too many details were indicated, though. The declaration details suggest that the device will supports Bluetooth 5.0 and carry the model number W2056.

The details also suggest that the design has been registered under the name, “vivo Watch,” which further adds to the speculation that the smartwatch may indeed be called Vivo Watch upon launch.

Earlier in February, two models of the smartwatch were spotted on European Union Intellectual Property Office (EUIPO) that suggests a European launch for the wearable by the China-based tech firm. The models were listed as WA2056 and WA2052, which might denote two size variants. In June, the upcoming smartwatch model WA2052 received 3C certification in China as well.

In April, news of the smartwatch's arrival was tipped a notable tipster as well. However, no specifications or other details have surfaced anywhere yet.

With the new smartwatch, Vivo is expected to compete with rivals Realme, Oppo, and Xiaomi, each of the companies has already launched its own wearables. The Realme Watch was launched in May, and was marked by features such as heart-rate monitoring, touchscreen support and up to 14 sports modes. It is available for purchase in India for Rs. 3,999.

On the other hand, the Oppo Watch was launched in China in March. Available in sizes of 46mm and 42mm, the device carried a price tag of CNY 1,499 (roughly Rs. 16,100). Xiaomi also offers Mi Watch.