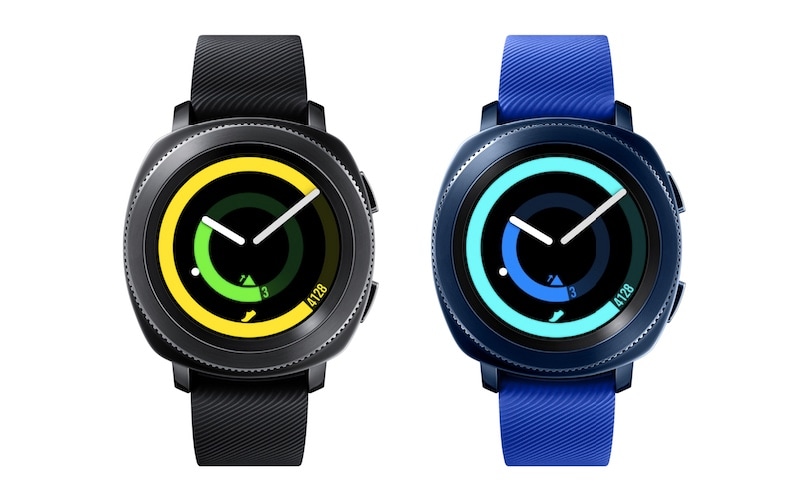 On the sidelines of the IFA trade show in Berlin on Wednesday, Samsung unveiled the Gear Sport smartwatch, Gear Fit2 Pro fitness tracker, and its Apple AirPods rival IconX 2018 wireless earbuds, furthering its commitment to making waves in what is still nascent wearable market. The Gear Sport as well as the Gear Fit2 Pro run Tizen, company's homegrown mobile operating system, which itself is trying to find significant traction.

To ensure the current generation Samsung Gear Sport and Fit2 Pro perform well, the company is betting on offline music support through Spotify, a capability that its predecessor Gear S3 was also supposed to have but never did. Much of the other design choices and capabilities remain the same.

Available in black and blue colour models, the Samsung Gear Sport smartwatch has a circular AMOLED display with diameter of 1.2-inch and screen resolution of 360x360. You can charge the 300mAh battery on the smartwatch wirelessly, the company said. You can still rotate the bezel to navigate, a feature that several users have appreciated in the past Gear smartwatch models.

The Samsung Fit2 Pro, the existence and features of which the company accidentally announced last week, sports a larger, 1.5-inch AMOLED display with a screen resolution of 216 x 432. It houses a 200mAh battery, which you will have to charge using a cable. It comes in two colour options as well: black and red. The touchscreen display will allow you to read and skim through real-time updates and notifications, the company said.

Aside from this, both the devices have similar innards. They are both powered by a 1.0GHz dual-core processor (of an unnamed type) and 4GB of internal storage. The Gear Sport smartwatch has 768MB RAM, while its fitness tracker sibling Fit2 Pro comes with a 512MB chip. They are both rated as water resistant to 5ATM and also carry MIL-STD-810G certification.

Both also offer heart rate sensors, and Bluetooth and Wi-Fi connectivity options. The GPS radio sensors, available in both the wearables, are there to ensure improved tracking. Both the devices will also work with Android smartphones (provided you bought them in last two years) and iPhone 5 or above.

Which brings us to the IconX cord-free earbuds. You can do several things on them, including putting songs for offline use (it features up to 4GB internal storage) as well as ask questions to Bixby, Samsung's digital assistant. Samsung says the battery life on IconX earbuds will be about four to six hours and they will come in black, grey, and pink colours.

Gear Fit2 Pro will begin shipping in the United States starting September 15 at a retail price of $199 (roughly Rs. 13,800). No word on when it will be available in India. Also Samsung didn't share how much will it charge for the Gear Sport smartwatch and the IconX earbuds.