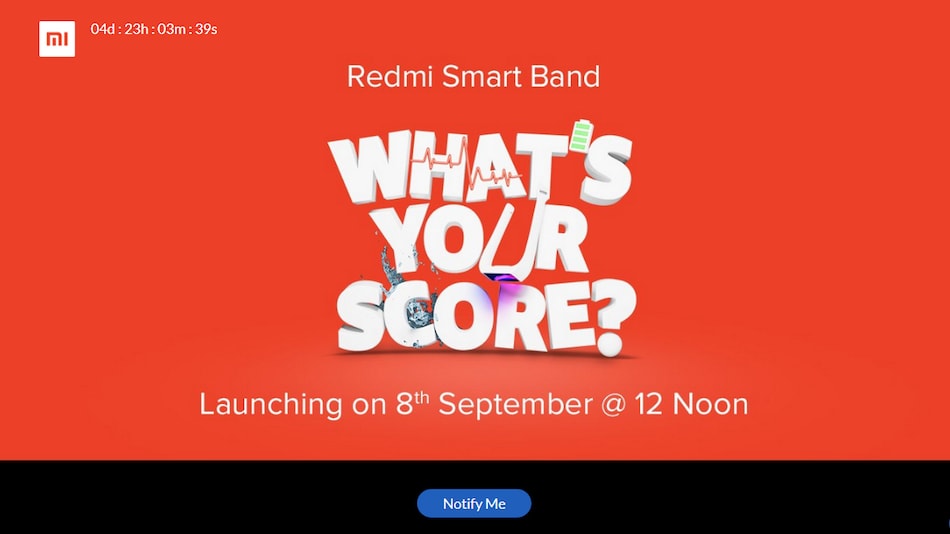 Redmi Smart Band will launch in India on September 8 at 12pm (noon), Xiaomi has revealed through its Redmi India Twitter handle. It will be the brand's first smart band in India, though a Redmi Band was launched in China back in April. It is likely that Xiaomi is bringing the same smart band to India as the Redmi Smart Band. As of now, the company has not shared any key specifications and only teased a few details, ahead of its September 8 launch.

The Redmi Smart Band by Xiaomi will be launched on September 8 at 12pm (noon), as announced by Redmi India on Twitter. The company has not shared pricing or availability details for the smart band and it is unclear if there will be a launch event or just an announcement. More information can be expected as we move closer to the date.

To recall, Xiaomi launched its first Redmi Band in China back in April for CNY 99 (roughly Rs. 1,100).

RT and gear up to know #WhatsYourScore!

Not much is known about the Redmi Smart Band and the event page on Mi India website has the title “What's Your Score?” which is presumably a fitness score. The page also teases colourful strap options, green, blue, and red to be specific. It also teases a long lasting battery, water resistance, heart rate monitoring, and a light weight build.

The Redmi Smart Band coming to India will likely be the same Redmi Band originally launched in China a few months back. If so, the features will likely include five sports modes, optical heart rate sensor, and sleep monitoring. The Redmi Smart Band can be expected to sport a rectangular 1.08-inch colour display with more than 70 personalised dial faces. It may come with a 14-day battery life and Android device compatibility.