Realme Band now gives users three options to control their music including play/pause, forward, and back. 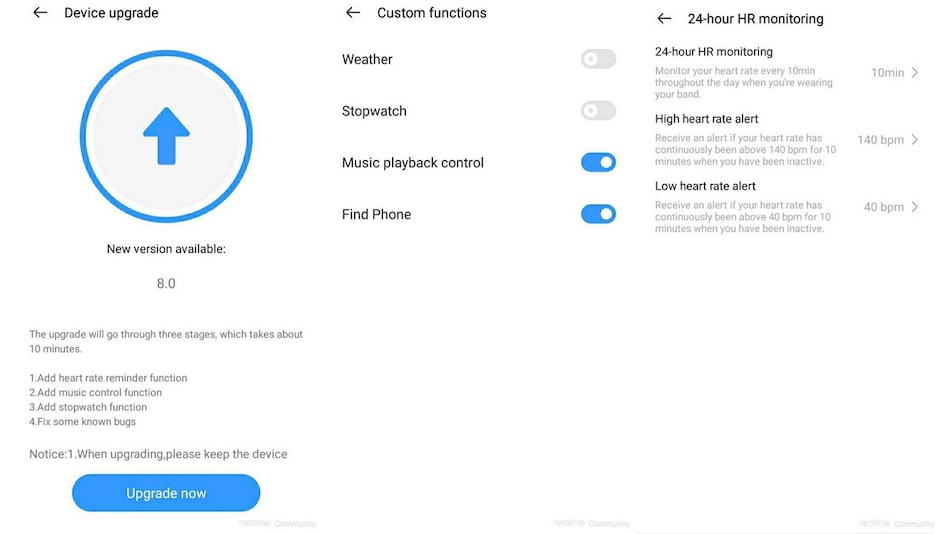 Realme Band has started receiving a new update that brings some much needed and much awaited functionality to the smart band. The version 8.0 update, as posted on the Realme community, brings music controls, heart rate reminders, and stopwatch to the Realme Band that launched in March. The update also fixes some software bugs. To recall, the Realme Band received the version 6 update in April that brought a host of features to the smart band including the Find My Phone function, Weather function, and more.

The latest update for Realme Band users brings multiple new functionalities and as always, requires the Realme Link app for the process. Once the app is opened, it should prompt for the update which, as per the changelog posted on the community forum, would take around 10 minutes.

Music playback control: Realme Band users will now be able to control the music playing on their phone from their band. The new update brings four options namely, play/pause, forward, back, and exit allowing users to switch and stop tracks right from the band.

Stopwatch: The stopwatch function is pretty self-explanatory. You can now get a timer going on your Realme Band and not have to use your phone for it.

The Music playback control and Stopwatch functions are located in the Custom Functions option, along with Weather and Find Phone that were added in the v6 update. Notably, only two out of the four total functions can be used at once.

It is unclear if the update is rolling out in a phased manner, or is now available for all users. We have reached out to the company for information on the same and will update this space as and when we get a response.

5 Laptops You Can Buy for Working from Home