Realme Band sale in India will take place through the Realme.com website between 2pm and 4pm on March 5. 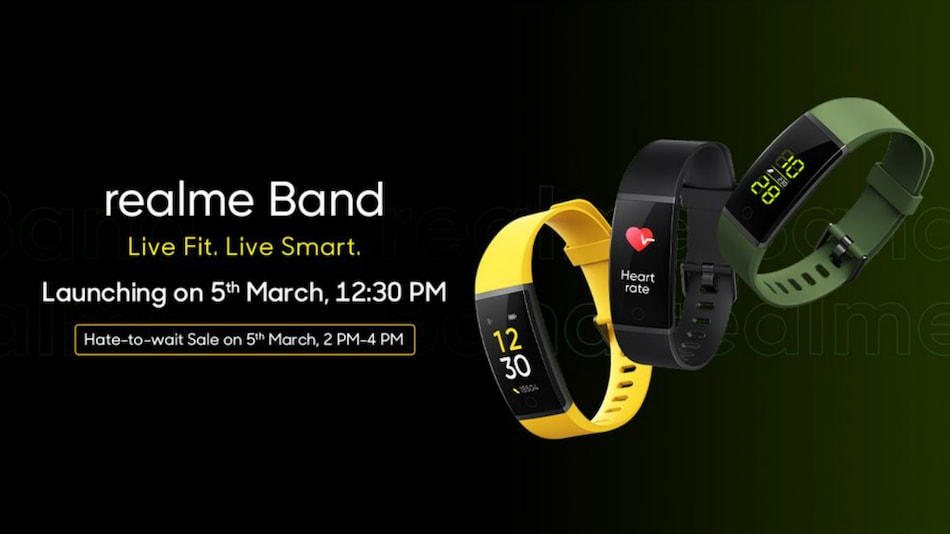 Realme Band will be available for purchase through a “Hate-to-wait” sale following its official launch in India on March 5, Realme India CEO Madhav Sheth revealed through a tweet posted on Friday. The smart fitness band will be a part of the Chinese brand's artificial intelligence of things (AIoT) ecosystem that would also include a smartwatch. If we look at the renders shared by the brand, the Realme Band would have a design similar to that of the Honor Band 5. The fitness band would sport a curved and colour display.

As per the tweet shared by Madhav Sheth, the Realme Band will be available through the Hate-to-wait sale in India between 2pm and 4pm IST on March 5. This will notably take place just after the debut of the fitness band in the country that is also scheduled for March 5.

Realme will host its Hate-to-wait sale through its own website. However, the wrist band would also be available for purchase through other channels over time.

The image shared by Sheth shows that the Realme Band will come in at least three distinct colour options. Also, the image suggests that the fitness band would have different watch faces as well as the ability to monitor heart rate.

Realme has been teasing its fitness band since December. Sheth through an Ask Me Anything (AMA) session originally divulged that the Realme Band would debut in the first half of 2020. Last month, he suggested its arrival as soon as next month -- the launch is finally taking place next week, though.

Alongside the smart fitness band, Realme has a smartwatch in the works that will come with a circular dial, as suggested by a recent teaser.

During the launch of the Realme X50 Pro 5G earlier this week, Realme shared its plan for the AIoT ecosystem that will be managed using the Realme Link app. The ecosystem would include smart speakers, headphones, and some other connected devices in addition to the smart band and smartwatch offerings.