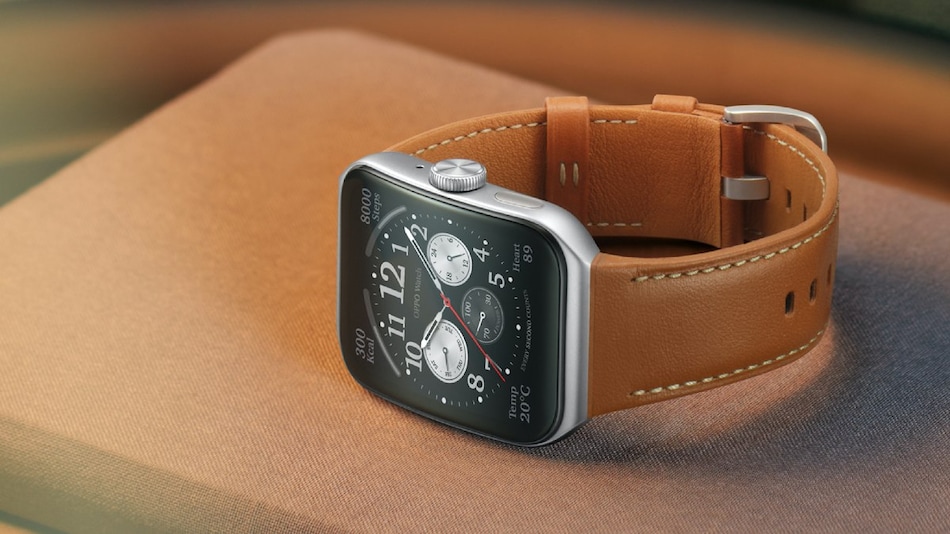 Oppo Watch 3 — the upcoming smartwatch from the Chinese smartphone manufacturer — renders have surfaced online, ahead of the imminent launch of the wearable device. The company has already confirmed the arrival of the Oppo Watch 3 series which will be powered by the new Qualcomm Snapdragon W5 Gen 1 SoC, but is yet to announce a launch date. Previous reports suggest that the Oppo Watch 3 could launch in China on August 10. Nearly a week before the expected debut of the smartwatch series, alleged design renders of the Oppo Watch 3 were leaked by a reliable tipster.

Alleged renders of the Oppo Watch 3 were leaked by tipster Digital Chat Station on Weibo. This Oppo smartwatch is shown to sport a micro-arc design with a curved screen in the purported renders. It has a rectangular dial with a crown button on the side. The renders showcase two colour combinations — a silver frame with a textured leather strap and a black frame with a black silicon strap.

Oppo announced on Tuesday that the Oppo Watch 3 series will be powered by the latest Qualcomm Snapdragon W5 Gen 1 chipset. Furthermore, the tipster previously claimed that the lineup could feature low-temperature polycrystalline oxide (LTPO) display with an adaptive refresh rate. They are expected to include ECG monitoring capability as well.

According to a past report, the Oppo Watch 3 could launch in India with three models — OWW211, OWW212, and OWW213. It could offer Black, Silver, Dark Gray, and Light Gold colour options at launch. The smartwatch is said to have slim bezels with a high screen-to-body ratio.

Its predecessor, the Oppo Watch 2 was launched last year in July. Its 42mm variant has a 1.75-inch AMOLED display whereas the 46mm version sports a 1.91-inch AMOLED display. Under the hood, it packs a Qualcomm Snapdragon Wear 4100 SoC. The 42mm model houses a 360mAh battery that is claimed to last for 10 days per charge. Similarly, the 46mm variant packs a 510mAh battery that is said to deliver up to 16 hours of backup.

Truecaller Collaborates With GoKwik to Minimise Returns for E-Commerce Brands