Microsoft Shows Off Possible Future of Football Viewing With HoloLens 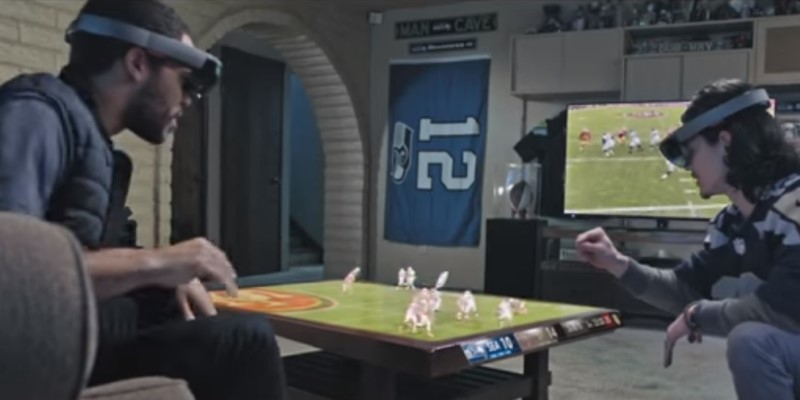 Imagine being able to watch all 22 players at the snap with video that expands from your living room television set to the entire wall.

Curious about how big Terrence "Pot Roast" Knighton really is, or how 5-foot-11 quarterback Russell Wilson is able to use his high release point to avoid getting passes batted down? Try standing next to a hologram of Knighton right in your den on an NFL Sunday, or watching a hologram of Wilson release the ball right over your outstretched arm.

Wonder why your favorite quarterback just threw an interception, or how a big hole opened for a running back on a touchdown run? Just load up a 3D version of the play on your coffee table and zoom it, pause it and rotate it around 360 degrees to see how the cornerback baited the quarterback into a bad throw, or a pulling guard help spring a long run.

The designers at Microsoft believe those seemingly far-fetched dreams could one day be a reality in living rooms around the country. Microsoft showed off its HoloLens technology at the Super Bowl this week as the company tries to redefine the experience of watching NFL football at home.

(Also see:  Facebook Sports Stadium to Help Fans Join in on the Conversation)

"This stuff is coming," said Brian Rolapp, the executive vice president of media for the NFL. "It's not a question of if, it's a question of when."

The technology is not ready to be released to the public, but Microsoft used a game played between Seattle and San Francisco at Levi's Stadium earlier this year to show the capabilities. With 3D capable cameras spread around the entire stadium, plays were able to be brought to your coffee table with the press of a button on your phone or the movement of your hands.

All 3D forms of the 22 players were lined up and viewers could walk around the table to see different angles, pause the video or zoom in to certain parts of the field.

On one play in particular you could see 49ers cornerback Tramaine Brock eyeing Wilson from his outside zone coverage spot. Wilson thought he had a streaking Doug Baldwin open for a touchdown but couldn't see Brock, who broke on the ball and made an interception in the end zone.

"If you could ever put a fan in that position it would completely open their eyes to a whole new realm of what professional football is," New Orleans quarterback Drew Brees said after seeing the technology. "It's really cool watching on TV, it's really cool watching in the stadium. I'm sure we will get to the point where they are able to experience it that way and it will be like a lightbulb went on."

Microsoft wants to show it off now to developers and content providers such as the NFL to see what creations can best use the HoloLens, which costs about $3,000 (roughly Rs. 2,03,460) right now. But the designers at Microsoft believe perhaps some time in the next decade it could be available for consumers.

The NFL has worked closely with Microsoft as its technology partner in developing the prototype showed off this week. While having the HoloLens could completely change the at-home viewing experience, Rolapp is not concerned it could deter people from wanting to watch at the stadium.

Rolapp said it's crucial for the NFL to also work on improving the stadium experience by offering better Internet connection and more access to highlights, replays and fantasy statistics.

"The stadium is still the best place to watch football," Rolapp said. "People who come to the stadium sacrifice time and money and make a big investment, so it's our responsibility to make the stadium experience as good as we can. It's not an either-or. The fact of the matter is the majority of people view the game from home. I think you have to improve both aggressively and make both experiences as good as possible."

While the 3D view was the most eye-opening part of the demo, the HoloLens also allows for views of the telecast to expand from the confines of a television screen to fill an entire wall, allowing all 22 players to be seen at once.

It also allows for in-game stats or fantasy statistics to pop right up on your wall beside the footage and can even produce holograms that bring players right into the living room, where you can measure yourself up to see their size.

"That's something that maybe you don't appreciate and get when you watch a lot of big guys running around out there," Brees said. "You really get to put into perspective when one of those guys is standing next to you and it's Calvin Johnson, and you're like 'Oh my gosh.' Or Cam Newton and you're like, 'I didn't know they grew quarterbacks that big.' It certainly looks very life like when they're standing right there in your living room."