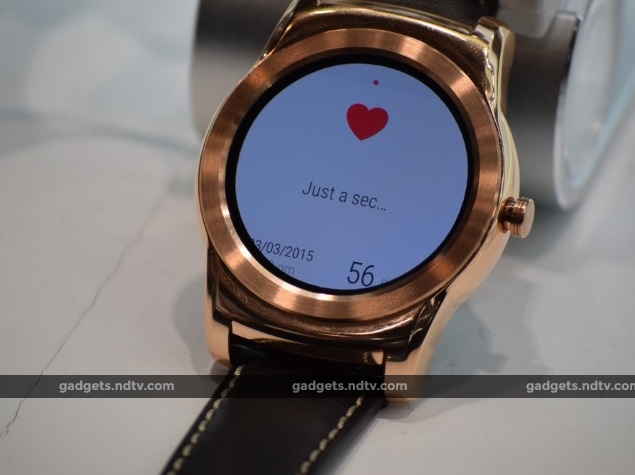 NDTV Gadgets has learnt that LG India is getting ready to launch its premium smartwatch the LG Watch Urbane in the country. The smartwatch will be launched in India carrying a maximum retail price (MRP) of Rs. 35,000 though the MOP is lower than that, so prospective customers should be able to buy it from retailers at a small discount. An official announcement from LG is expected within this week.

Announced back in February, the LG Watch Urbane features a 1.3-inch circular Plastic OLED (P-OLED) display with a resolution of 320x320 pixels and a pixel density of 245ppi. Other specifications include a quad-core Qualcomm Snapdragon 400 clocked at 1.2GHz coupled with 512MB of RAM (LPDDR2). It comes with 4GB (eMMC) of inbuilt storage. The LG Watch Urbane measures 45.5x52.2x10.9mm and will be available in Rose Gold and Silver colours. It is backed by a 410mAh battery. It features Photoplethysmogram (PPG) sensor to track heartbeat, a 9-axis (gyro/ accelerometer/ compass), and a barometer. It comes with IP67 certification that makes it dust and water resistant.

The LG Watch Urbane comes with built-in Wi-Fi, and it was the first Android Wear smartwatch update to receive the recent Android Wear update that brought Wi-Fi connectivity and other features. Note that the version getting launched in India is Wi-Fi only, and not the webOS-based LTE variant.

The LG Watch Urbane sports a stainless steel body and features a stitched natural leather strap that can be swapped with any standard 22mm band. The smartwatch also features an always-on ambient mode that shows the time on the display at all times in dimmed mode, resulting in potential battery savings.