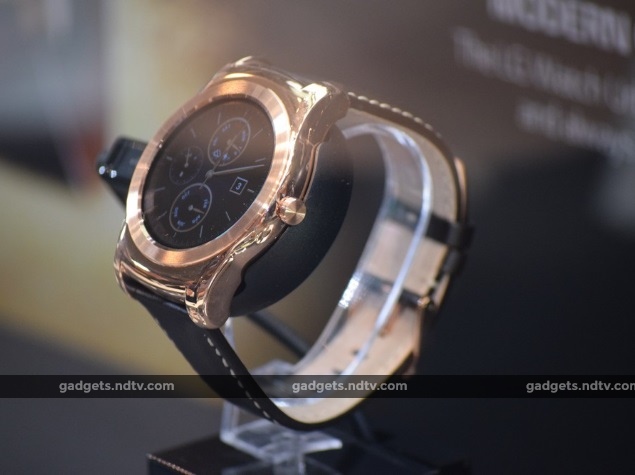 LG, after launching its Magna smartphone on Tuesday, has now made its LG Watch Urbane up for purchase on Google Store in the US. The firm announced the global rollout of its Android Wear-based smartwatch via the Google portal last week.

Priced at $349 (roughly Rs. 22,000), the LG Watch Urbane for now is available in the US. Sporting two variants - silver and gold, the smartwatch will start shipping on May 8. While announcing the global rollout last week LG said the smartwatch would be made available to buy in countries including Australia, Canada, France, Germany, Hong Kong, India, Ireland, Italy, Japan, Korea, Spain, the United Kingdom and the United States starting this month. There is no word on the smartwatch's LTE-based model, which runs on WebOS and is currently available in South Korea for $608, as per the Verge.

Notably, Google last week while introducing a major update to Android Wear announced that the LG Watch Urbane will be the first one to receive the updated OS with new features.

The $349 price tag of LG Watch Urbane makes the piece of wearable fall with the likes of Apple Watch (Sports Edition) and the Huawei Watch, which was recently tipped tipped to cost EUR 349. The launch however comes at the time when the firm is all set to launch its flagship handset, the LG G4.

The LG Watch Urbane is inspired by the company's first circular smartwatch, the G Watch R, and sports an "all metal" design. It also features LG Call and LG Pulse functionality for easy calling and measuring the heart rate of the wearer.

The LG Watch Urbane features a 1.3-inch circular Plastic OLED (P-OLED) display with a resolution of 320x320 pixels and a pixel density of 245ppi. Other specifications include a quad-core Qualcomm Snapdragon 400 clocked at 1.2GHz coupled with 512MB of RAM (LPDDR2). It comes with 4GB (eMMC) of inbuilt storage. The LG Watch Urbane measures 45.5x52.2x10.9mm and will be available in Gold and Silver colours. It is backed by a 410mAh battery. It features Photoplethysmogram (PPG) sensor to track heartbeat, a 9-axis (gyro/ accelerometer/ compass), and a barometer. It comes with IP67 certification that makes it dust and water resistant.