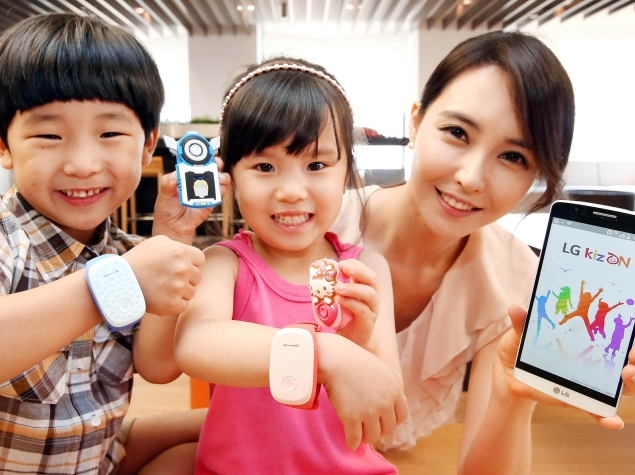 LG Electronics on Wednesday has launched a new wearable device that's exclusively designed for pre-school and primary school children, called KizON. The wristband is meant to help parents to keep a track of their young kids.

LG will first release the device in South Korea on July 10, followed by launches in Europe and North America in the third quarter of this year. The pricing and availability will be announced locally, said LG.

The KizON wristband by LG utilises GPS and Wi-Fi to provide real-time location information on a smartphone or a tablet. Also using the wristband's preset Location Reminder function, alerts can be received at specific times throughout the day. The KizON wristband is compatible with all devices running Android 4.1 or higher.

Other than its location sharing feature, parents can even communicate with their children via its One Step Direct Call feature. Kids can also use the same feature to dial a pre-configured phone number from KizON. The numbers can be changed at any time through a connected smartphone or tablet.

"If the child fails to answer a call from any of the pre-configured numbers within ten seconds, KizON will automatically connect the call to let the parents listen through the built-in microphone," said LG in a press release.

On specifications front, the LG KizON supports 2G and 3G networks. It comes with 64MB of RAM and has 125MB built-in storage. The 400mAh battery on LG KizON is rated for 36 hours and parents will get an alert on their connected device as it falls below 25 percent.

LG has used eco-friendly polythiourethane (PTU) material that is water-resistant as well as stain resistant. It measures 34.7x55.2x13.9mm and comes in three colours: blue, pink and green.
Comments