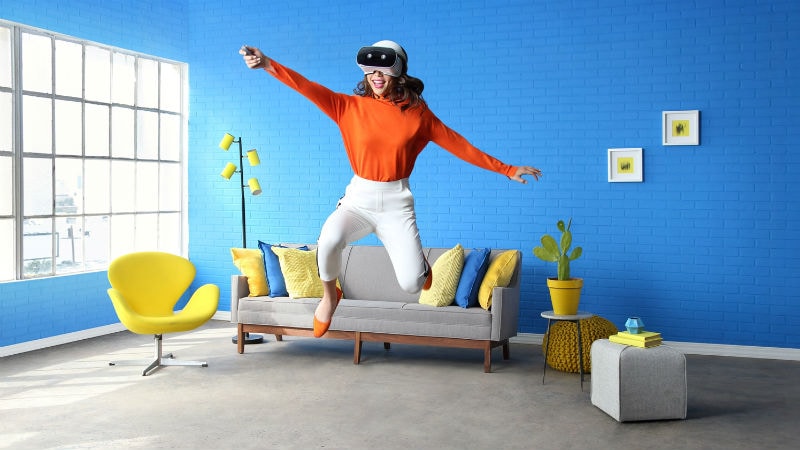 Lenovo Mirage Solo
In May 2017, Google had announced at I/O 2017 that it is working with partners including HTC and Lenovo to develop standalone VR headsets. However, later Google and HTC confirmed the cancellation of plans. But now Lenovo has finally revealed the standalone Daydream headset called Mirage Solo. With the new device, users will not have to connect a smartphone to the headset to get into virtual worlds. Owing to WorldSense tracking technology, the device gets two cameras at the front of the headset which tracks head as well as body movements.

In a press release, Lenovo says, "Mirage Solo users will be the first to experience the full potential of motion-tracking technology, called WorldSense, on Google's Daydream virtual reality platform. WorldSense lets you move around and explore your virtual environments as if you're truly there - leaning, dodging or ducking through space."

The Mirage Solo packs specifications that are usually found in Android smartphones. It has a Snapdragon 835 processor with 4GB of RAM and 64GB of super-quick UFS storage along with a microSD option as well. It sports a 5.5-inch QHD LCD screen and is powered by a 4000mAh battery which runs up to 7 hours, says Lenovo. The Mirage Solo comes with a controller similar to the wireless controller present in Google's Daydream headset. Even the headset has controls like power and volume. The headset's display comes with a 110-degree field of view for immersive VR engagement.

The Lenovo Mirage Solo is expected to be available starting in the second quarter of 2018.

Meanwhile, Lenovo's VR180 is powered by a Qualcomm Snapdragon 626 SoC with 2GB of RAM and 16GB of built-in storage expandable via microSD. The camera comes in Wi-Fi and LTE variants. In the camera, a 2200mAh battery gives up to 2 hours of usage. The camera can also start high-resolution 3D live streams.

The Lenovo Mirage VR180 camera format can be viewed in 3D in Daydream View, Cardboard, or and the standalone Mirage Solo headset. Users can also view in 2D on smartphones or PCs through Google Photos and YouTube.

The Lenovo Mirage camera and Yi Technology's Horizon VR180 camera are expected to be available beginning in the second quarter this year.

New Glass C220
Lenovo has also unveiled the New Glass C220 that mixes AI learning and augmented reality. It has a Glass Unit and Pocket Unit and works by recognising and identifying real-life objects using AI technologies. The Glass Unit runs on Android. You can experience AR through one eye while keeping the other in the real world, says Lenovo. The device gathers information in the field of view, giving step by step direction for repair, identifying disabled equipment and troubleshooting issues. It features anti-noise interaction, mobile computing capacity, and custom mods.