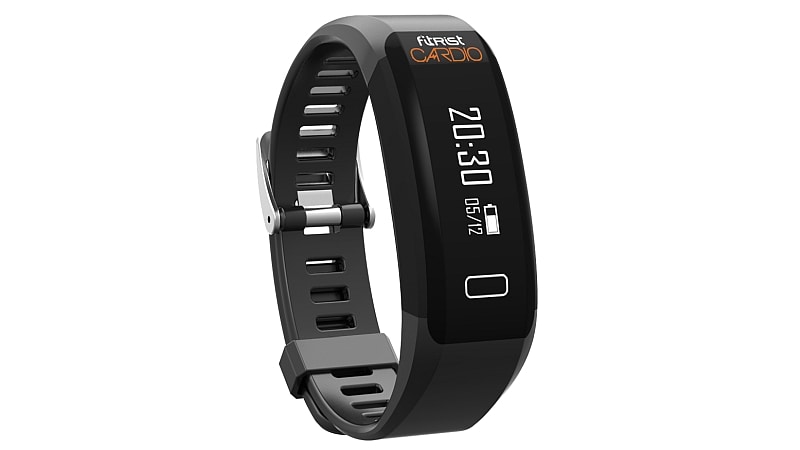 Intex on Wednesday unveiled a new version of its FitRist activity tracker, called FitRist Cardio. Adding heart rate tracking to the fitness band's capabilities, Intex has made the FitRist Cardio available to buy exclusively via Amazon India in Black colour variant, with a price of Rs. 1,499. At its price, it takes on the Xiaomi Mi Band 2, which was launched at Rs. 1,999 last year with a heart rate sensor and OLED display.

The Intex FitRist Cardio fitness band sports a 2.18cm OLED display with a 96x32 pixels resolution, and it weighs about 26 grams. The company boasts of Bluetooth 4.0 connectivity on the activity tracker, with which it connects to Android (v4.4 and above) and iOS (v7.0 and above) smartphones. It can also receive OTA updates via a connected smartphone. The FitRist Cardio bears a 80mAh battery that's rated to deliver up to 7 days of battery life. It is water resistant, and features a heart rate sensor, sleep monitor, hydration alarm, and a step/ calorie counter.

The company adds that the FitRist Cardio can provide Facebook, WhatsApp, and SMS message notifications. On Android phones, the fitness tracker will display incoming calls with caller ID, however, on iPhone models, the band will display the call icon if the contact is stored on the phone, and will display the phone number if the contact isn't stored. The Intex FitRist Cardio also has an 'anti-lost' function that will help locate the fitness band if it gets lost.

Finally, Intex is also boasting of a couple of other features on the FitRist Cardio. Users can control their smartphone's playlist with the MP3 control feature, while a remote shutter feature lets users control the camera of their connected smartphones to remotely click pictures.

Commenting on the launch,. Nidhi Markanday, Director & Business Head, Intex Technologies, said, "Since our entry into the wearable segment in 2015, with iRist Smart watch and FitRist band, Intex has been well received by the market and to enrich our bouquet of offerings, Intex FitRist Cardio has been designed to fulfil the needs and become a one-stop solution for those who take their fitness seriously."