Amazfit T-Rex is a rugged watch that is MIL-STD-810G compliant. It has passed 12 regulations on military grade testing. 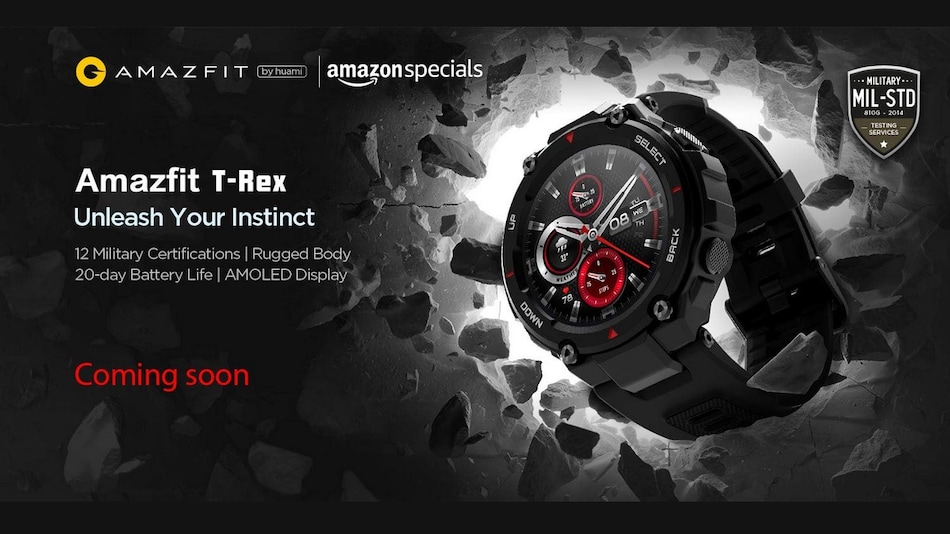 The Amazfit T-Rex launched with five colour options namely, Ash, Black, Camouflage, Green, and Khakhi. The smartwatch is priced at CNY 799 (roughly Rs. 8,400) in China and $139.99 (roughly Rs. 10,600) in the US. Huami has not shared the price for the Indian variant or the sale date for the Amazfit T-Rex but the company did reveal that the smartwatch would launch in the second week of June.

Another device from the same brand, the Amazfit Bip S will go on sale through Amazon, Flipkart, and Myntra starting June 3, as per the company's recent announcement.

The Amazfit T-Rex features a 1.3-inch (360x360 pixels) AMOLED display with Gorilla Glass 3 protection. It comes with an optical heart rate sensor (PPG), 3-axis accelerator, geomagnetic sensor, and ambient light sensor onboard. For connectivity, the Amazfit T-Rex uses Bluetooth v5.0 and also has GPS + GLONASS. It is backed by a 390mAh battery that the company claims, can last up 20 days in daily use mode. In basic watch mode, the battery can last up to 66 days. With continuous GPS use, the watch will run out in 20 hours. Huami says it takes about two hours to fully charge the watch. The Amazfit T-Rex is 5ATM water resistant meaning it can sustain submersion in water up to 50 meters. It measures 47.7x47.7x13.5mm and weighs about 58 grams. This rugged smartwatch is MIL-STD-810G compliant and has passed 12 regulations on military grade testing.

When it comes to activity tracking, the Amazfir T-Rex has 14 sports modes and can monitor sports heart rate, statistics of exercise duration, and other data. It comes with all-day heart rate monitoring and you can perform other smartwatch functions like getting notifications, checking the weather, call reminders, SMS reminders, mobile payment, and more.