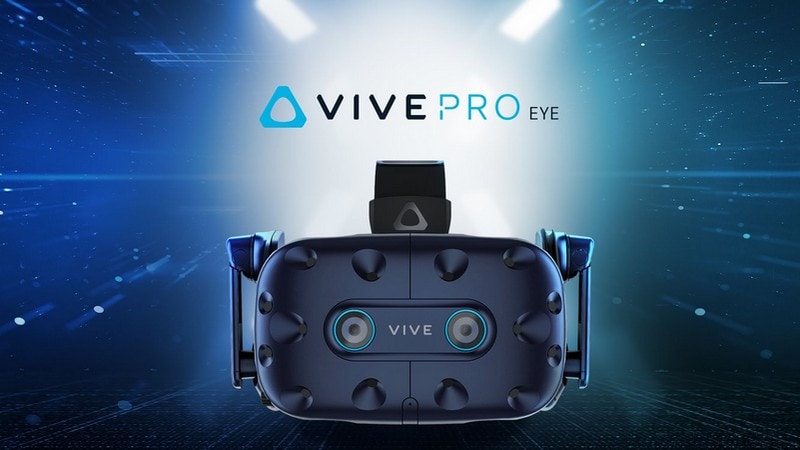 HTC Vive Pro Eye is a professional VR headset, while the Vive Cosmos is consumer facing

HTC's Vive division has unveiled two new VR headsets dubbed the Vive Cosmos and the Vive Pro Eye at the company's press conference at CES 2019. The biggest highlight of the Vive Pro Eye is the fact that it comes with precision eye control technology while the HTC Vive Cosmos is a VR headset which comes equipped with inbuilt motion sensors and can be connected with a smartphone or a PC. Additionally, HTC has partnered with Mozilla to make Firefox Reality the default web browser on all Vive VR headsets. HTC also announced an unlimited Viveport subscription for VR content, called Viveport Infinity, apart from the new Vive Reality System.

HTC Vive Pro Eye
As mentioned earlier, the Vive Pro Eye headset comes with native eye-tracking technology for monitoring eye movements in order to deliver a more immersive VR experience. HTC claims that the new Vive VR headset, meant for professional VR use cases, will drastically enhance the user experience by eliminating the need for controllers and using the eye movements for executing commands, which can prove to be particularly useful when it comes to VR gaming. The Vive Pro employs what HTC calls 'foveated rendering', a technology which efficiently allocates the GPU power for better image rendering and an overall sharper visual output. HTC has already showcased the Vive Pro Eye's eye-tracking capabilities with an official MLB app called the MLB Home Run Derby VR that will arrive in 2019. HTC has revealed that the Vive Pro Eye VR headset will be launched in the second quarter of 2019, however, details about its pricing are yet to be revealed.

The Vive Cosmos is the other new VR headset unveiled by HTC which has a more mass-market appeal to it and is designed with ease of use and module-based customization in mind. The Vive Cosmos employs the new Vive tracking system with support for gesture controls and 6 degrees of freedom (6 DoF). The device can be set up with relative ease and has a flip-up design which allows users to lift the headset's main body in front of their eyes without having to take off the entire device. The Vive Cosmos can be paired with a PC, and will get smartphone connectivity in the future. It comes with redesigned controllers which flaunt a new design. Another notable feature of the Vive Cosmos is customization, with HTC promising that the company will keep upgrading the device with a wide array of modules that will be showcased soon. Details regarding the Vive Cosmos' pricing and market availability are yet to be made official, though the first developer kits will be unveiled in early 2019, the company announced.

HTC Viveport Infinity, Vive Reality System
Called the biggest upgrade to the Viveport subscription, the Viveport Infinity subscription offers unlimited content access without restrictions. It will go live on April 5, which the company calls Vive Day. It will be available on all Vive devices current and future. Next, the company also announced the Vive Reality System, which is its new UI for virtual reality experiences and will debut first on the Vive Cosmos later this year, before being made available across the entire Vive product portfolio.

In addition to lifting the cover from new VR headsets, and as part of the Vive Reality System, HTC has also announced the arrival of Mozilla's Firefox Reality browser that will now come as a default Web browser for all VR headsets in the Vive lineup, which means users will no longer have to download a Web browser on their VR headset.