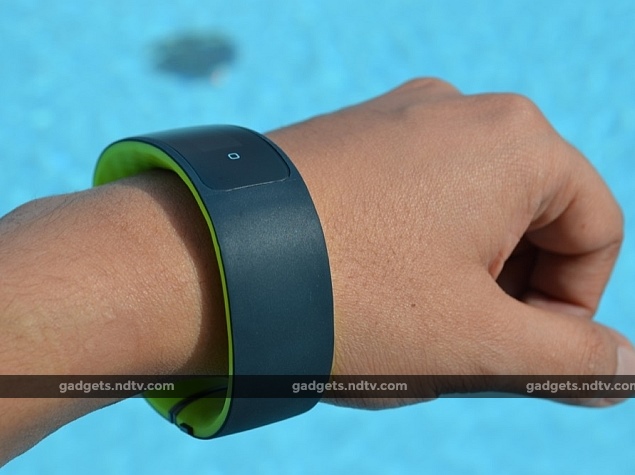 HTC on Sunday unveiled its first fitness tracker, the HTC Grip. The smartband is powered by UA Record, a health and fitness network from Under Armour designed for athletes and fitness enthusiasts. The HTC Grip will be available in Deep Teal/ Lime colours at select retailers in North America beginning Spring 2015. HTC says it will be available to the rest of the world at a later date.

GPS and Bluetooth 4.0 enabled, HTC Grip smartband is compatible with devices running Android 4.3 and higher, and iOS 7 and higher. It features IP57 certification for dust and water resistance, rating it immersible in up to 1 metre of water for up to 30 minutes. It is also shock resistant, compliant with MIL-STD 810G 516.6 Procedure I, IV specification. The contoured, waterproof band is available in three sizes, small, medium, and large.

The HTC Grip smartband runs on the company's own RTOS operating system, and runs on a STM32L151QDH6 SoC. It features a 1.8-inch (32x160 pixel) PMOLED mono flexible display with capacitive touch input. It comes with 16MB of storage, and 8MB of SRAM. The 100mAh rechargeable battery is rated to deliver up to 2.5 days of battery life, and 5 hours with GPS activated. Other sensors onboard include a sensor hub, g-sensor, gyroscope, compass, GPS, light sensor.

It is capable of tracking and recording a variety of workouts - from running and cycling to the gym - and also monitors sleep. The Grip also connects to an assortment of external heart rate monitors, including the Under Armour A39. Paired with Android or iOS smartphones, it provides incoming call and message notifications, and allows music playback control.

Drew Bamford, Corporate Vice President of HTC Creative Labs commented, "Our partnership with Under Armour has allowed us to direct our combined ambition, talent and passion towards developing new ways to empower athletes to make the most of their training every day. Grip is our first product to offer deep integration with UA Record, providing an experience that will surpass the high standards of even professional athletes."

Robin Thurston, SVP, Connected Fitness, Under Armour said, "HTC is an exciting partner for Under Armour and Grip, designed by HTC and powered exclusively by UA Record, is just a taste of what's to come in the next year. Together we're looking forward to exploring new ways to empower and inspire athletes of all levels and to rewrite the rulebook of performance tracking, training and improvement."

Disclosure: The correspondent attended a pre-MWC briefing in Barcelona at HTC's expense.

HTC One M9 With 20-Megapixel Camera, Snapdragon 810 Launched at MWC 2015
HTC One M9 First Impressions: Do the Evolution