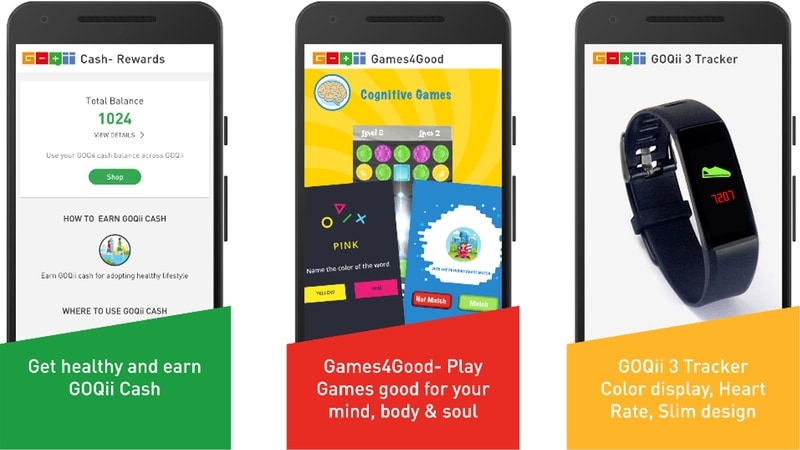 Goqii, a company that has gone from calling itself a fitness service to a preventive healthcare platform, on Thursday made a slew of announcements including new family subscription plans, a new version of its activity tracker, an online marketplace for health-related food products, accessories, and medicines, apart from a platform for games.

Goqii offers subscriptions at Rs. 1,999 for three months, Rs. 3,499 for six months, and Rs. 4,999 for a year. Each of these plans give you access to a fitness coach and a doctor, and you get one activity tracker when you subscribe. The company now allows people to add up to four family members per account, but if you want an activity tracker for each of your family members, then you’ll have to pay extra. Also of note is that a portion of the subscription fee can be used for tax savings in India under Section 80D, Goqii claims.

While Goqii is not a hardware company, its activity tracker is an important part of its subscription service. Gondal said at the company’s event in Mumbai that a new version of the activity tracker, with a purported battery life of around 15 days, will be available by the end of January 2018. Gondal said the device will have a colour display, continuous heart rate monitoring, and a feature called Presence+. This is a location detection feature that allows Goqii to detect when you’ve met other Goqii users based on other activity trackers in the proximity. You can then add these people as friends on the Goqii app, the company claims.

Goqii Review: A Remote Coach You Might Not Need

The next announcement at the event was about Goqii Health Store — an online marketplace for health foods, accessories, supplements, and medicines. The company has partnered with online medicine store 1mg and the restaurant chain Healthie, among others. The medicines and supplements you order off the store gets added to your health locker on the Goqii app, the company said.

Goqii also announced the launch of a virtual currency called Goqii Cash, which you can earn via the Goqii app. The company claimed that you can earn Goqii Cash by walking, logging a meal, or buying products on the Goqii Health Store. Finally, the company launched a new platform for games called Games4Good. This includes puzzle based cognitive games that Goqii claims will help you exercise your mind and “prevent brain disorders”, although if we were you, we’d take these claims with a pinch of salt.