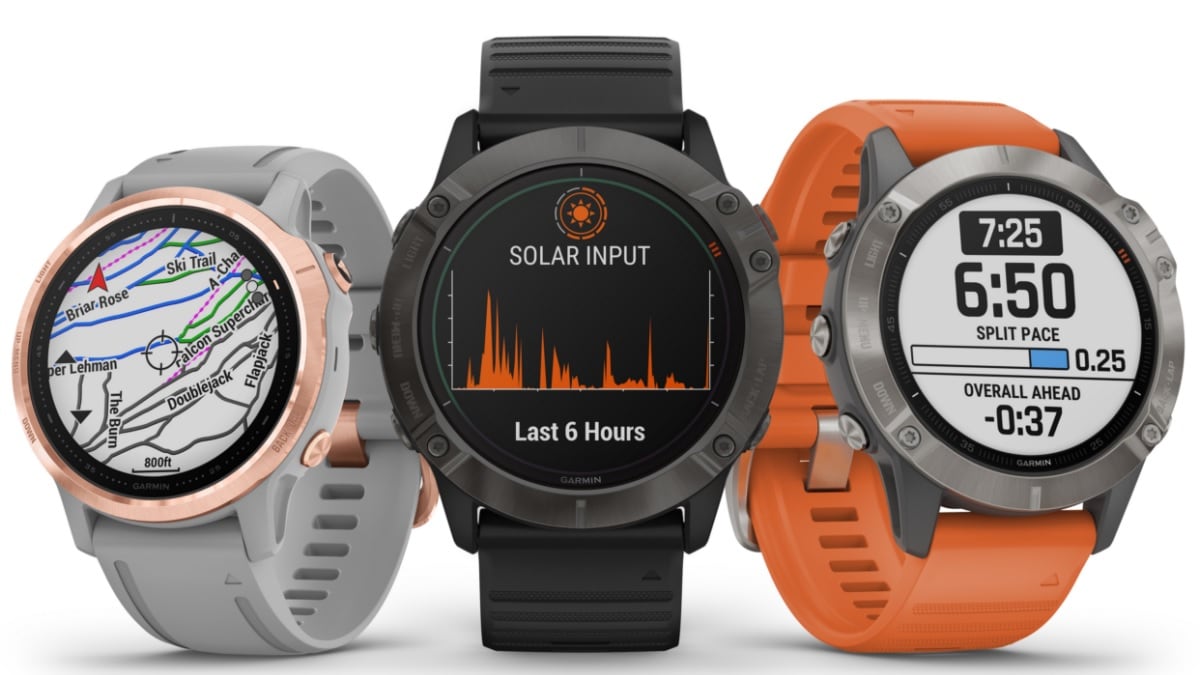 Garmin has added three new products to its smartwatch portfolio by launching the Fenix 6, Fenix 6S, and Fenix 6X. The Fenix 6 series smartwatches from Garmin come in 42mm, 47mm, and 51mm size and a choice between Pro and Sapphire editions. Notable among them is the Fenix 6X Pro, which comes equipped with a “Power Glass” solar lens that can further extend the smartwatch's battery. The Garmin Fenix 6 series comes with a new PacePro feature and more battery management tools, alongside pre-loaded topographic maps and the ability to track a wide range of physical activities.

The Garmin Fenix 6S features a 1.2-inch (240 x 240 pixels) display and employs the new 20mm QuickFit watch bands. The display is protected by Gorilla Glass 6, and in the case of its Sapphire version, there is Sapphire Crystal coating on top for scratch resistance. The Fenix 6S comes equipped with heart rate and Pulse Ox sensors, and relies on the new PacePro feature with grade-adjusted guidance that varies with the course. The Garmin Fenix 6S smartwatch starts at $599.99 (roughly Rs. 43,000).

The Fenix 6 features a 1.3-inch (260 x 260 pixels) display and comes in two variants with the option to choose between Steel and Titanium case. Just like the Garmin Fenix 6S, the standard Fenix 6 also packs 32GB of internal storage and is rated to work under 10ATM of liquid pressure. It also comes preloaded with terrain maps akin to all new entrants in the Fenix 6 series, and likewise comes with the PacePro and Power Manager feature for managing the battery life. Starting price of the Garmin Fenix 6 has been set at $599.99 (roughly Rs. 43,000).

The largest smartwatch in the series, the Garmin Fenix 6X Pro, comes equipped with a 1.4-inch (240 x 240 pixels) display and will set buyers back by at least $749.99 (roughly Rs. 54,000). The Solar edition of the Garmin Fenix 6X Pro is the company's first watch to offer support for solar charging. It employs Power Glass, which is a transparent solar charging lens that uses the sun's energy to juice the battery. The Fenix 6X offers the PacePro feature for grade-adjusted guidance while running. It also comes pre-installed with topographic maps for outdoor adventures, ski maps for over 2,000 ski resorts, and 41,000 golf courses across the globe.