Fitbit Sense can detect your stress levels and skin temperature to help you stay healthy. 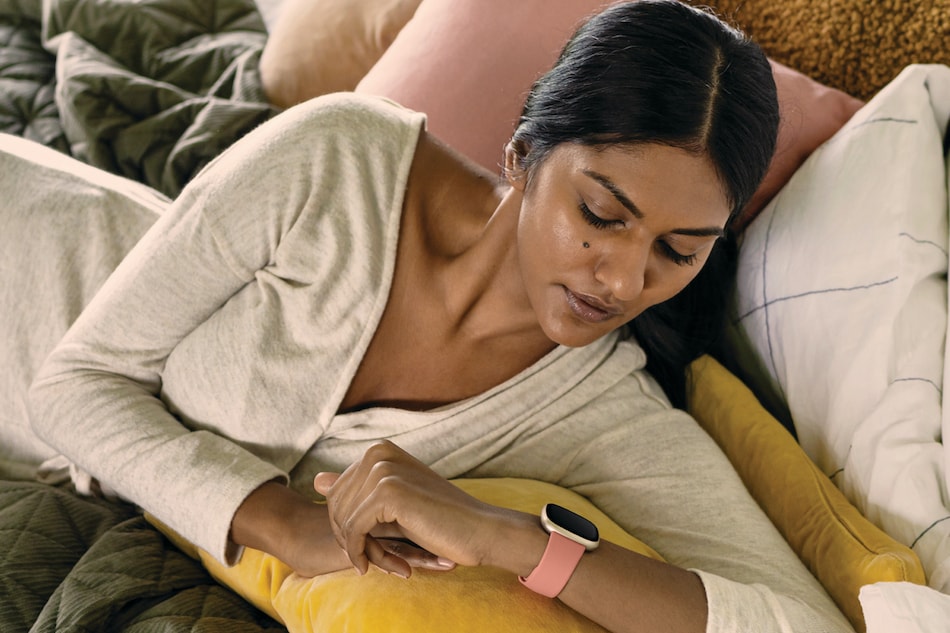 Fitbit Sense is the company's most advanced fitness smartwatch yet

Fitbit today launched three new health-focused wearables at a virtual launch event. The new wearables – Fitbit Sense, Fitbit Versa 3, and Fitbit Inspire 2 – pack several sensors that can help track essential data to help users maintain a healthy lifestyle. Fitbit says the recent COVID-19 outbreak has made it essential for people to take care of their physical and mental health. The company's new fitness wearables also offer complimentary access to Fitbit Premium for a limited period. Fitbit will be relying on both sensors and its algorithms to offer users meaningful data to lead an overall healthier life.

Fitbit Sense is the company's flagship fitness wearable among the three. The smartwatch comes with an EDA sensor that is used for stress management, which Fitbit claims is the first for any wearable. The sensor can measure a user's electrodermal activity responses, which is essentially checking for tiny electrical changes in the sweat levels of the skin. Sense comes with a large AMOLED display with an ambient light sensor.

Fitbit says it can use the data from the EDA sensor to offer relevant stress-related data that will help users manage their stress. The company is also introducing a new Stress Management Score that will tell users how their bodies respond to stress based on certain health metrics including activities, heart rate, and sleep patterns.

The new Fitbit Sense also comes with an ECG app that can help detect heart issues such as atrial fibrillation. The company claims its new PurePulse 2.0 technology, which uses the in-built heart rate sensor, is its most advanced heart rate technology yet. It will be able to inform the user when the heart rate gets too slow or too fast.

Besides, Fitbit Sense also comes with a new skin temperature sensor that can detect early signs of a fever or the start of a new menstrual cycle. The smartwatch will regularly detect skin temperature and keep a log of it. Fitbit Sense can also detect a user's SpO2 levels during the day as well as at night. Fitbit claims it learned from a study on COVID-19 that some health metrics detected by Fitbit wearables, such as breathing rate and resting heart rate, can be used to detect early COVID-19 symptoms.

Fitbit Versa 3 is the second fitness-focused wearable the company has launched today. The smartwatch comes with in-built GPS, PurePulse 2.0, and a built-in speaker to help you make phone calls while on the move. Versa 3 also comes with support for virtual assistants such as Google Assistant and Amazon Alexa. Users can also use Fitbit Pay to make payments at select merchants, a feature available in select countries as of now.

Both Fitbit Versa 3 and Fitbit Sense use the same magnetic charger and promise a battery life of up to six days on a full charge. The company claims users can do a quick 12-minute charge for a full day's worth of usage. Fitbit's smartwatches and fitness bands are compatible with both Android and iOS smartphones.

Fitbit Sense is priced at Rs. 34,999 while the Fitbit Versa will cost Rs. 26,499 here. The Fitbit Inspire 2 fitness band is priced at Rs. 10,999. While all the three new fitness wearables are available for pre-orders in the US, a much wider global release will kick off by the end of September. All the three new Fitbit wearables will be available in India in the fourth quarter of 2020.