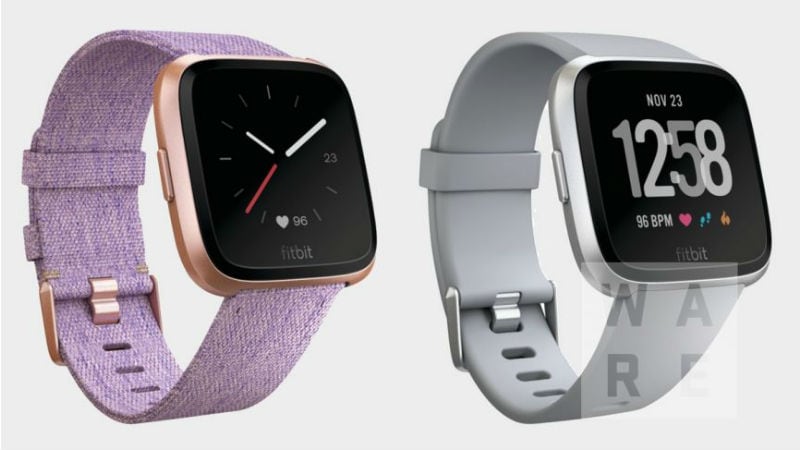 A long time after serving its offerings largely for fitness enthusiasts, Fitbit is now apparently looking to attract the masses with its new smartwatch - which has been leaked in some images. The new wearable, which could debut as the Fitbit Blaze 2, is rumoured to run the same Fitbit OS that first arrived on the Ionic last year, though it is also said to lack GPS support. Importantly, Fitbit CEO James Park during the recent investor call divulged the plans to launch a smartwatch with "mass appeal" and efforts to expand the existing smartwatch category, adding credibility to the rumour.

The leaked images, shared by Wearable, show an all-new Fitbit device that appears to be reminiscent of the Pebble Time Steel. Fitbit notably acquired Pebble last year and is set to end support for Pebble smartwatches in June. Folks at Wearable mention that the device spotted on the renders will come as a successor to the Fitbit Blaze; it is thus expected to be launched as the Blaze 2, though the company may choose a different name altogether to distinguish the new offering from its previous smartwatch models. The renders also show different watchfaces in digital and analogue styles. The watchfaces also sport a blood-oxygen sensor as well as offer a step and calorie counter.

If we look at the multiple versions spotted on the leaked renders, the new Fitbit smartwatch is likely to come in options such as Rose Gold, Silver, or Black Accents, alongside featuring straps variants in Plastic and Fabric materials. Wearable mentioned citing some sources familiar with Fitbit's plans that the company the new device "to be something that will appeal to a larger, more general smartwatch audience." The rumoured device is said to have a water-resistant build but no GPS module. It appears that the absence of GPS could help Fitbit make the smartwatch available at an affordable price.

Earlier this week, Fitbit announced a multi-year deal with Adidas and launched the Fitbit Ionic: Adidas edition at a price of $330 (approximately Rs. 21,500). The smartwatch features a breathable sports band and includes an Adidas-designed watchface as well as compatible with the Adidas Train app.

While announcing the quarterly results for its fourth quarter of 2017, Fitbit CEO James Park suggested the smartwatch expansion plan. He said in a press statement, "In 2018, we'll focus on managing down expenses, continuing to expand in the smartwatch category and supporting our engaged global community on their health and fitness journey."

The venturing of Fitbit into the mass-market of smartwatches could make competition tougher for companies such as Garmin, Fossil, Tag Heuer, and Samsung. However, the company will need to choose an appropriate price and feature list to make its mass-audience targeted smartwatch appealing enough against the Apple Watch that is leading the market so far.