Facebook Messenger on Oculus can be used to chat even if the other person doesn’t have a VR headset. 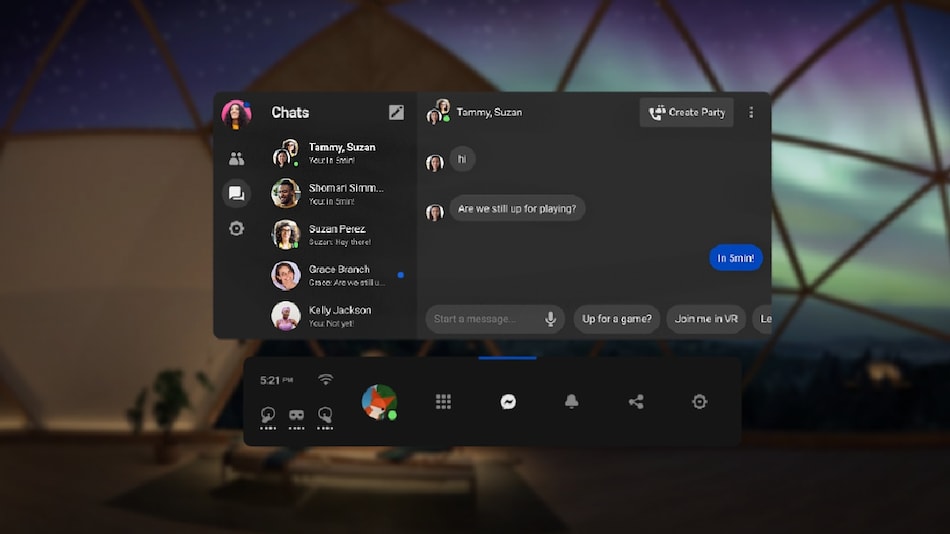 Facebook Messenger is coming to Oculus Quest headsets this week, the company has announced. Users who have logged into Oculus Quest and Quest 2 using their Facebook accounts can use Messenger to chat with their friends even if the person on the other side does not have a Virtual Reality (VR) headset. You can type out a message in VR, send pre-written messages, or use the voice-to-text feature. There is also an option to create an Oculus Party on Messenger to play a game with friends together.

The social media giant announced the integration through an Oculus blog post. Facebook said that it believed in VR's ability to bring people together, especially in these times, and was hence building the tools to make that a smoother, more accessible experience.

Facebook ensured users that their existing Oculus privacy settings will not be affected shall they choose to communicate with Facebook friends via Messenger. Besides, users will still be able to message their Oculus friends using Oculus chats with their existing Oculus usernames. Users can also play with friends on Messenger by creating an Oculus Party.

Users can choose to sign out of Messenger at any time via the settings, in case they want to lend the headset to others. The signing back in process is easy and can be done by selecting the Messenger profile and re-entering the password.

The Oculus update also introduces App Lab, which will let developers distribute their creations safely and securely with Quest headset owners without the approval of the Oculus Store as was needed earlier. App Lab doesn't require any sideloading or special setup; users can download by clicking on a link and going directly to the app.

Facebook has started gradually rolling out the v25 software update to the Oculus Quest headsets that brings the new features. Facebook has been integrating its platforms, including Instagram, Messenger, and WhatsApp. Oculus is the latest to join the list.