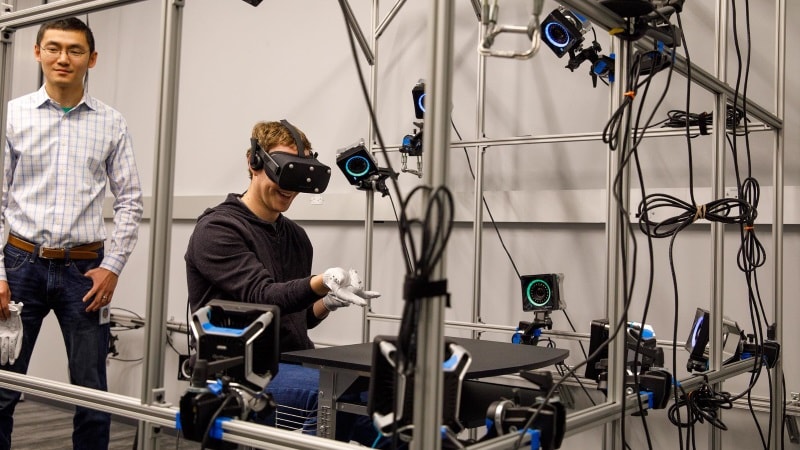 Facebook CEO Mark Zuckerberg has openly expressed his interest in virtual and augmented reality on several occasions and his latest visit to Oculus research lab might have given us a glimpse of company's vision for its VR headset. Zuckerberg has shared a picture of him using prototype motion-tracking gloves that might be launched for the Oculus Rift VR headset in the future.

"We're working on new ways to bring your hands in virtual and augmented reality. Wearing these gloves, you can draw, type on a virtual keyboard, and even shoot webs like Spider Man. That's what I'm doing here," Zuckerberg said in caption for the image.

Even though the Facebook CEO didn't share any specific details about the gloves, they are likely to be embedded with motion sensors that can work in synchronisation with Oculus Rift VR headset. As these gloves are just a prototype, it cannot be said with certainty that they will be launched in future but this picture does confirm that the company is working on this technology.

The Oculus research lab, based in Redmond, is home to the team led by gaming legend Michael Abrash that focuses on things like advanced optics, eye tracking, mixed reality and new ways to map the human body, Zuckerberg said in his post. Sharing his vision for AR and VR, Zuckerberg said that the goal is to make glasses compact enough for easy mobility and software advanced enough to allow users to experience anything.

As per Zuckerberg, the company's aim is to develop technology that allows users to interact with virtual world just like the real one. It will be interesting to see how the company moves forward in the alternate reality field, which has progressed a lot in past two years specifically.