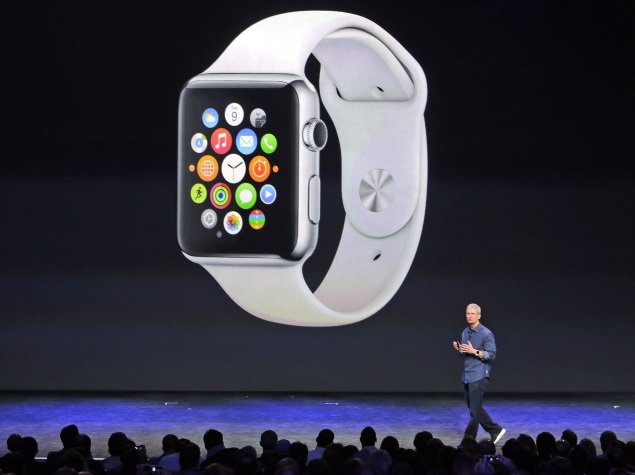 Apple strapped computing to the wrist Tuesday with Apple Watch.

"Apple Watch is the most personal device we have ever created," Apple chief executive Tim Cook said, while announcing the hotly-anticipated move into wearable computing.

The watch comes in two sizes and an array of choices of interchangeable, fashionable wrist straps.

Cook introduced Apple Watch with the "one more thing" introduction that was a trademark of iconic Apple co-founder Steve Jobs.

"It is the next chapter in Apple's story," Cook said of the first new product category to be entered by the company since the death of Jobs in 2011.

"We invented intimate ways to connect and communicate directly from your wrist; it works seamlessly with iPhone and it is also a comprehensive health and fitness device."

Apple watch will start at $349 when it is released early next year, according to Cook. The smartwatch will work with iPhone 5 models and newer.

Apple has been working on Watch for a long time, and didn't just shrink the iPhone and strap it to the wrist, Cook told a rapt audience in a performing arts center in Silicon Valley where Jobs introduced the Macintosh computer 30 years ago.

While Apple Watch has touch-screen capabilities, many controls were designed into a "digital crown" button so fingers do not block screens.

Sensors can detect a wearer's pulse,and the devices tap into motion sensing features in iPhones to provide a "comprehensive picture of activity" and help work toward fitness goals, according to Apple senior vice president of design Jonathan Ive.

Applications for the watch include map software that guides people to destinations with gentle "taps" on the wrist.