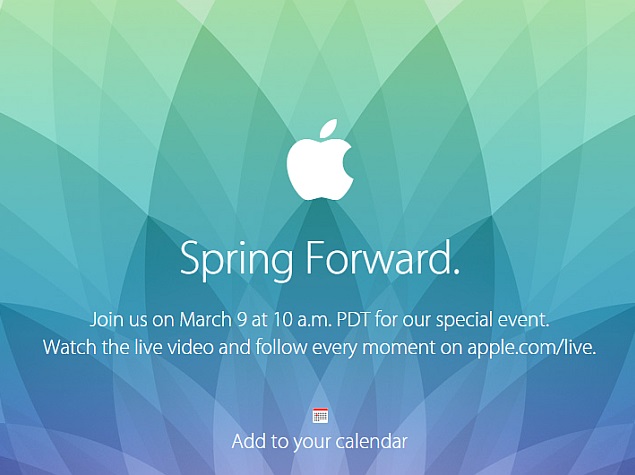 Apple on Thursday started sending invites for its 'Spring Forward' event scheduled for March 9 in San Francisco. The company will also be live-streaming the event, which is expected to launch the Apple Watch.

The Cupertino giant on its website said, "Join us on March 9 at 10am PDT for our special event." The event will start at 11:30pm IST.

The live stream of the 'Spring Forward' event can be watched on Apple devices running Safari 5.1.10 or later on OS X v10.6.8 or later, and Safari on iOS 6.0 or later. In typical Apple fashion, the website or Apple's invite does not reveal much detail about the event.

Interestingly, 'Spring Forward' is a term used in timekeeping to indicate the setting of clocks an hour ahead at the start of Daylight Savings Time in the Spring. Along with the date, the name of the event certainly tips the firm will launch the Apple Watch on March 9.

The Cupertino-based giant announced some of the major features of the Apple Watch at its September event; though details are still left to be disclosed, such as the pricing options, official release date, battery details and others. At September launch last year, Apple revealed that the Apple Watch would be priced starting $349 and would be available in "early 2015."

Last month, CEO Tim Cook revealed that the Apple Watch will start shipping in April and the March event seems to be in-line with those plans.

Another device that might see light of the day on March 9 may be the anticipated 12-inch Macbook Air, which has been rumoured for some time now. A recent report suggested that the new laptop from Apple would be the company's "first major step in mobile Mac computing since the Retina MacBook Pro launch in 2012." The much-rumoured 'larger iPad' is also a possibility.