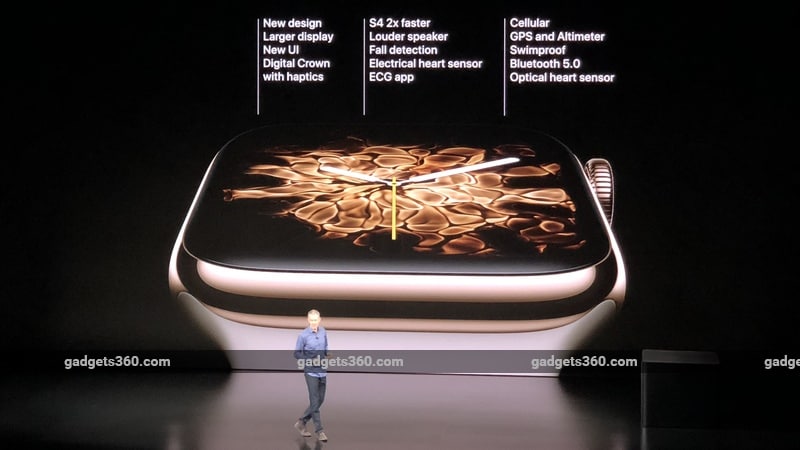 Apple Watch Series 4 price starts at $399 in the US; price in India not revealed yet

Apple on Wednesday announced the launch of the fourth generation of its Apple Watch at an event in the company's Steve Jobs Theater in Apple Park, Cupertino. The latest smartwatch from Apple comes with a new design and larger display - one with thinner bezels compared to last year's model. It also features ECG functionality that has been given a 'De Novo' classification by the US FDA. Other highlights include a ceramic build, optical heart sensor, swimproof capabilities, and more.

At the launch event, CEO Tim Cook claimed that the Apple Watch is the highest selling watch in the world. The company is focusing on connectivity, fitness, and health as the three core elements of its smartwatch strategy. "Apple Watch has become an intelligent guardian for your health," said Jeff Williams, COO, Apple. "Everything has been redesigned and reengineered."

It will be available in three aluminium finishes, and there is a brand-new Gold stainless finish apart from Silver and Space Grey. Backward compatible is available on the part of wristbands.

As far as India is concerned, pricing and availability details haven't been revealed yet.

The display on the Series 4 is 30 percent larger than last year's model and comes in new 40mm and 44mm casing options, that are claimed to fit in a smaller footprint than last year's variants. In terms of design, the latest Apple Watch Series 4 resembles the Series 3 except the near-edge-to-edge design new placement of its microphone for echo reduction.

The smartwatch features the new Apple S4 SoC which contains a 64-bit dual-core processor and a new GPU, with up to two times faster performance when compared to the Series 3. The Series 4 also has a next-gen accelerometer and gyroscope with up to 2x dynamic range and up to 32 g-forces.

The Digital Crown now gets haptic feedback that helps navigate easily in apps like Calendar and Podcasts. The speaker on the Apple Watch Series 4 is 50 percent louder, and the microphone has been moved away from the speaker to reduce echo. Williams also said the back of the new Apple Watch is made entirely of black ceramic and sapphire crystal.

The Apple Watch Series 4 comes with built-in fall detection that can alert emergency services and SOS contacts immediately. Other additions include a 'low heart rate' notification, alerts for atrial fibrillation, and electrocardiogram (ECG). Williams stated this is the first ECG product available over the counter, directly to the customer. The results of the new ECG app will be stored in the Health app on your iPhone, and can be shared in the form of a PDF file. These new health features will be available for US customers later this year.

The new smartwatch is touted to be swimproof, has Bluetooth v5.0, and has an optical heart sensor. Apple Watch Series 4 is powered by the latest watchOS 5 - with the UI optimised for the larger display. Apple also showcased certain new watch faces including a new modular face, one with the ability to add several health and fitness statistics, and three new minimal faces to cut down on the amount of information for users who prefer it that way. New watch faces based on fire, water, and vapour effects were also introduced.