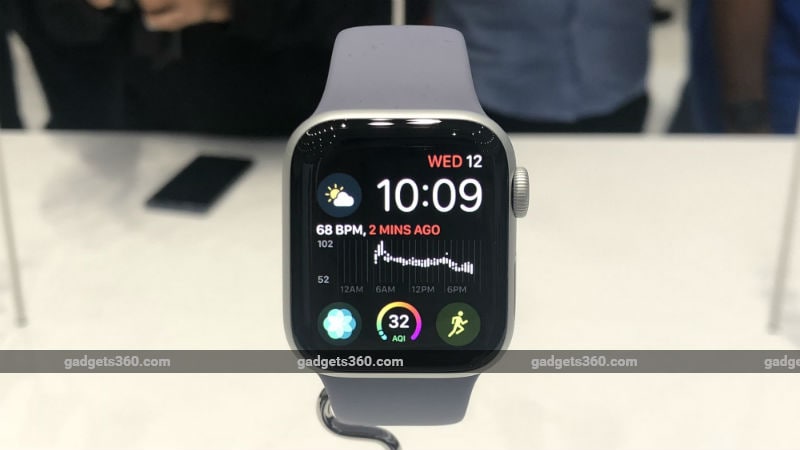 Apple Watch Series 4 smartwatches, unveiled alongside the iPhone XS, iPhone XS Max, and iPhone XR last month, has gone on sale in India. To recall, the Apple Watch Series 4 price in India and availability was officially confirmed last week, corroborating an exclusive report from Gadgets 360 from last month. The new smartwatch series is now available to buy in India via offline stores as well as online. Prices start at Rs. 40,900 for the 40mm GPS-only version, going up to Rs. 80,900 for the 44mm Cellular Milanese Loop variant.

The Apple Watch Series 4 has gone on sale in India via offline stores in the country. The IndiaiStore site also confirms that its retailers are stocking the smartwatch series. Amazon is also listing the 40mm and 44mm GPS-only versions for now, while Flipkart still says 'coming soon'. Amazon is listing launch offers as well, including no-cost EMI options.

IndiaiStore lists that 5 percent cashback is available on EMI for Citibank credit cards and Axis Bank, while 5X reward points are available on non-EMI. No-cost EMIs are also available on Bajaj Finserv. The retailer website also says that the smartwatch is available at an effective monthly cost of Rs. 1,799, which is calculated on MRP of the Apple Watch Series 4 ( GPS+ Cellular ) 40mm Space Grey Aluminium Case with Black Sport Band, based on the low-cost EMI on 24-month tenure on Axis Bank Credit Cards and Citi Credit Cards, and is inclusive of the additional 5 percent cashback.

Apple Watch Series 4 comes in 40mm and 44mm display sizes and is powered by the Apple S4 SoC that has a 64-bit dual-core processor and a new GPU. The new SoC is claimed to deliver up to two times faster performance over last year's Apple Watch Series 3. Further, there are next-gen accelerometer and gyroscope that enable the new Apple Watch to detect hard falls. Apple has also provided an electrical heart rate sensor that is accompanied by the optical heart rate sensors to record an ECG using the new ECG app. This experience will arrive in the US later this year, though there isn't any official word on its launch in India.

The Apple Watch Series 4 runs watchOS 5 out of the box and includes an improved speaker that is claimed to produce over 40 percent louder sound and is optimised for phone calls, Siri, and Walkie-Talkie. Further, the microphone on the Apple Watch Series 4 has been relocated to the right side — just next to the new Digital Crown to reduce echo and enable better sound quality than the previous model, Apple claims. The new Digital Crown also has haptic feedback.

The back panel of the Apple Watch Series 4 has a black ceramic and sapphire crystal. Furthermore, Apple says that the new Apple Watch model maintains the same all-day battery life.