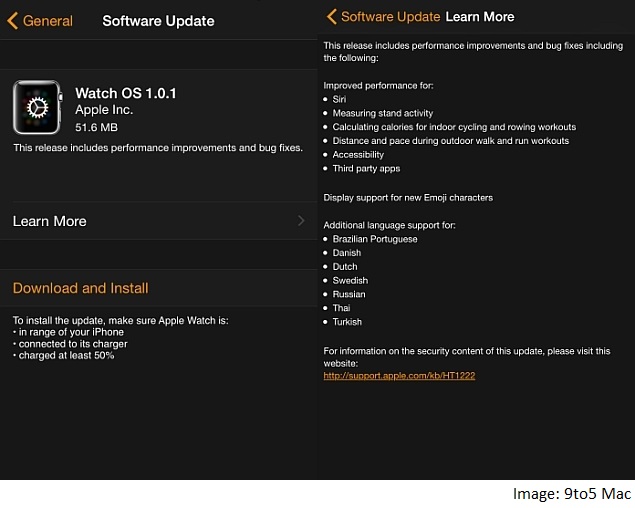 Apple has rolled out the first software update for Apple Watch within one month of its release, bringing up Watch OS 1.0 to Watch OS 1.0.1. It is worth noting that the wearable is receiving the update via its Watch companion app on iPhone devices.

Weighing in at 51.6MB, the Apple Watch OS 1.0.1 update fixes multiple bugs and improves the overall performance of the smartwatch. The update screen on the iPhone companion app lists six items under the "Improved Performance" section.

To install the update, the Apple Watch needs to have minimum of 50 percent of battery charge, and should be in range with the synced iPhone handset while connected to its charger. Looking at the bug fixes and improvements list in Apple Watch OS 1.0.1. Notably, Apple was earlier this week reported to be working on bringing new features to the Apple Watch with both software and hardware (product refresh) updates, including new health and fitness features apart from wider suppoer for third-party apps.