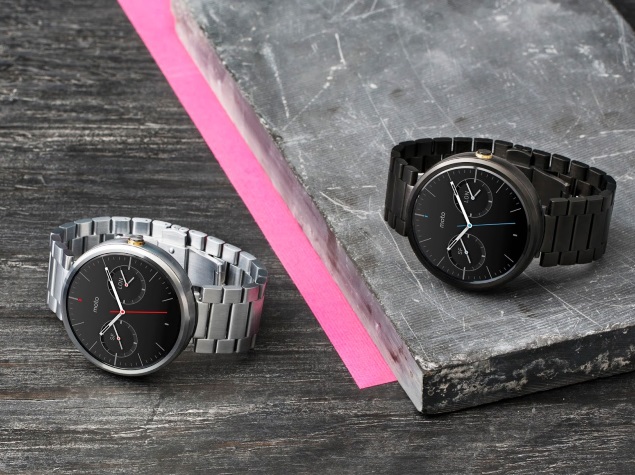 While Google announced new features for its Android Wear OS at the Google I/O 2015 in May, rumours and leaks for the next OS version have already started surfacing on the Internet. A report has suggested couple of major features that will come with the next Android Wear OS version.

The first feature said to arrive in the next Android Wear version is the single tap gesture. The gesture would let users make visual changes, launch activities, in-line expansion and more using one tap on the watch face, saving users the inconvenience of making several swipes, reports Phandroid.

It is worth mentioning that some watch faces available from Google Play already have the single tap gesture. However, those watch face developers are able to bring this feature using a hacked method - access of service window or use of invisible buttons. These might result in system conflicts. The introduction of the feature in the next update would make the function native to Android Wear.

The report also claims that with the next update, the function to launch voice commands using a single tap on the watch face display would be replaced completely by the new swift left gesture that was introduced with Android 5.1 update for Android Wear.

As per the document provided to the website, Google has given four examples of the functionality of the single tap gesture - changes to watch faces, state changes (such as weather), revealing more information (such as fitness graph), and launching an activity (will slide from right side of the watch face). It has been understood that Google, upon the launch of next Android Wear, would promote the interactive watch faces under a separate collection in Google Play.

The second important feature said to be included in the next Android Wear OS version is the watch-to-watch communication called Together. The feature is said to have taken clues from Apple Watch's functionality using which users can send heart beats and doodles to other Apple Watch users. In Android Wear, users would be able to send messages, stickers, emojis, and doodles.

The clues suggesting the existence of the feature come from some code strings. It has been also found out that the feature is limited to a single watch face, but the report notes that the code strings obtained were quite old, and it is possible Google would make changes to it ahead of launch. Also mentioned is that LG G Watch R, after the next Android Wear update, would be receiving the Wi-Fi upgrade. The feature was missing from the Android 5.1.1 update for Android Wear.