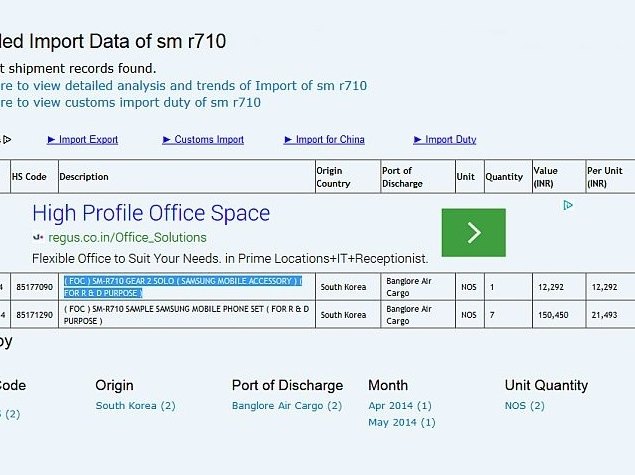 Looks like Samsung is not yet done with wearables and smartwatches this year, as now what seems like a new Samsung wearable dubbed Gear 2 Solo has been spotted at an Indian import/ export site.

Codenamed SM-R710, a device named the Samsung Gear 2 Solo has been spotted as listed on Zauba, an import/export data collection website, with a value of Rs. 12,292. The listing clearly mentions the device to arrive in India for research and development purpose. "SM-R710 Gear 2 Solo ( Samsung Mobile Accessory ) ( For R & D Purpose )" states the listing.

This piece of information goes in line with the last month's report from Korean Herald, which stated that a variant of the existing Samsung Gear 2, tipped as Gear 2 Solo, would arrive including a universal subscriber identity module or USIM. This means that users would be able to make and receive calls without the help of their smartphones. It was further noted that Samsung and SK Telecom are jointly preparing the new wearable.

With a listing on Zauba, the Samsung Gear 2 Solo wearable is anything but confirmed, and the product (listed as a R&D device) may never make it to retail shelves. So far, there has been no indication of possible availability or specifications.

Last month, the Korean tech giant announced it was going to hold a Samsung Gear App Challenge for developers to create apps specifically for its Tizen-based smart wearables - with a prize money of $1.25 million. The first set of challenges is scheduled to start on May 8. The company also says the Gear App Challenge is the first of Samsung's Smart App Challenges in 2014, so more such contests across different Samsung ecosystems can be expected this year.

Samsung states that the challenge will include various Samsung Gear Hackathon and Developer Day events to be held across the world, from South Korea, Malaysia, Singapore, USA, Brazil, and Russia.