Xiaomi Mi Band 5 comes with a larger display compared to the Mi Band 4. 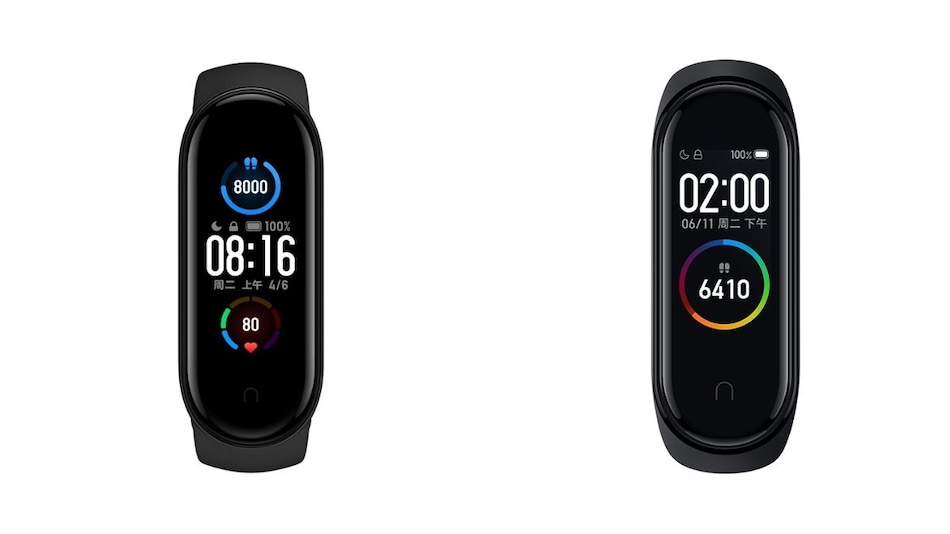 Mi Band 5 made its debut on Thursday, as a successor to the Mi Band 4, launched last year. One of the evident changes in the latest fitness tracker by Xiaomi is the 1.1-inch AMOLED display that is larger than the 0.95-inch OLED screen on the Mi Band 4. Other new features on the Mi Band 5 include magnetic charging, women's health mode, and upgraded sleep monitoring system. So in case, you're wondering, how the two smart bands by Xiaomi stack up against each other, at least on paper, here's a comparison.

The standard or the non-NFC version of Mi Band 5 carries a price tag of CNY 189 (roughly Rs. 2,000), while the price of its NFC variant is set at CNY 229 (roughly Rs. 2,500). Both the variants of Mi Band 5 come with Black, Blue, Pink, Orange, Purple, Yellow, and Green strap options and they will go on sale starting June 18 in China.

Xiaomi is yet to reveal the global pricing and availability of the Mi Band 5.

As mentioned, the newly launched Mi Band 5 comes with a larger 1.1-inch coloured AMOLED display and it features over 100 new animated watchfaces. The fitness tracker also has 11 sport modes and offers Personal Activity Intelligence (PAI) Activity Index that helps users track and understand their fitness activity even better. On the other hand, the Mi Band 4 sports a 0.78-inch coloured OLED display and offers 77 colourful watchfaces. The smart band comes with six sports modes.

Mi Band 5 and Mi Band 4's display has a 2.5D glass protection on top and the smart bands feature a built-in microphone to enable voice commands. Both the bands are water-resistant up to 50 metres and can identify various swimming strokes.

Another big change on the new Mi Band 5 is the charging system. The latest Mi Band supports magnetic charging that lets users charge the device without taking the strap off. Xiaomi claims that the NFC variant of the Mi Band 5 offers up to 14 days of battery life while the standard version is said to last up to 20 days on a single charge.

The standard variant of the Mi Band 4 on the other hand, is said to last 20 days on a single charge. To charge the device, users remove the capsule-shaped body from the strap. Other new features that the latest Mi Band 5 carries include pressure and breathing assessment, women's health tracking mode and remote shutter control to take photos via the connected smartphone.