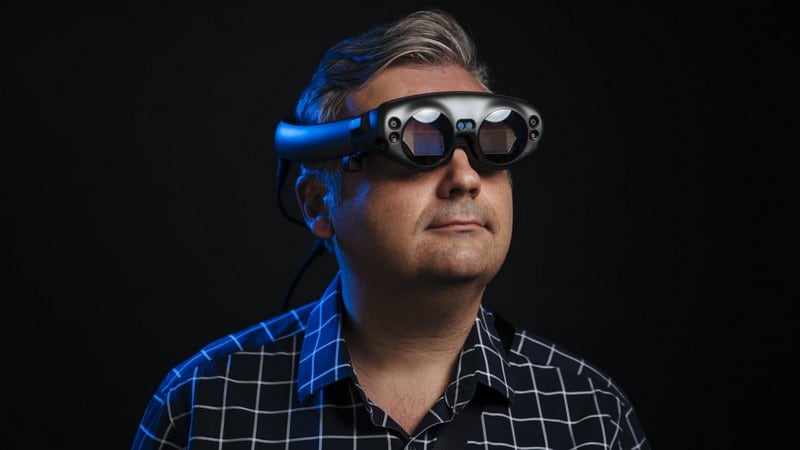 Photo Credit: Photo for The Washington Post by Mason Trinca

Tech's "next big thing" is looking more like a "maybe in a few more years thing."

Now come the unvarnished reviews. The company's first product, the $2,295 (roughly Rs. 1.62 lakhs) Magic Leap One, recently began shipping to developers. The Washington Post bought a pair, and I've been using it to test the Magic Leap augmented-reality experience.

Here's my real reality experience: Right now, Magic Leap isn't even a very good parlour trick. The product lets you walk around a room, tethered only to a disc-shaped computer worn on your hip, and experience a few 3D apps that map into the space around you. But it is not dramatically better than competing (and not terribly compelling) AR gear already out there, such as Microsoft's HoloLens.

Palmer Luckey, the ex-CEO of virtual reality pioneer Oculus and a rival, has been even more pointed. This week, he wrote, "Magic Leap is a tragic heap." (The company says he misunderstands its tech.)

Why should you care? You probably won't be buying a Magic Leap any time soon. But we're not going to be staring down at phone screens forever, ignoring family members and walking into traffic. Apple and other tech companies are eying AR as a phone replacement, too. AR glasses have wider potential than virtual reality gear, which effectively blindfolds you. The Magic Leap goggles, called Lightware, are translucent. When you wear them, it looks like a virtual world is painted on top of the real one - a creature is running around your desk, a web browser window is hanging on your wall.

There is, no doubt, a lot to be worked out for a new kind of computing device. But I'm surprised Magic Leap isn't further along on the basics - or even just some experiences to make you go "whoa." The Magic Leap One can't be dismissed as just a prototype. Not only is it for sale, the company has announced a partnership to, at some point, bring a product to AT&T stores for demonstrations. Magic Leap says this first version is for "creators" and programmers.

Most curious: The company blamed some of my challenges on an improper fit of its headgear. My fit had been set up by an agent Magic Leap sends to all deliver all purchases. I was left wondering how they'll ever sell the product to millions if hardware calibration is that delicate.

So what's it like? Here's six things that stand out about the real-life Magic Leap experience upon its debut.

1) Only a fraction of your view gets augmented, which ruins the magic.
The ultimate test for any augmented-vision tech: Do you feel like you're in a different world . . . or at least on some hallucinogenic substance? You can see some trippy things, but there's no way you'll forget what's producing them.

Looking through these lenses, it's like there is a box that fills about half the frame where all the 3-D images appear. If you move slightly, the virtual object you're looking gets awkwardly cropped. Magic Leap's field of view - about 50 degrees - is a bit wider than some rivals. But it still isn't enough to feel like a leap.

A few other factors also ruin the fantasy. Virtual objects that are supposed to be black can appear transparent. And the colours in general are like neon.

2) It tired my eyes quickly.
After about 20 minutes of wearing the Magic Leap One, my eyes started to feel like I'd been staring at a laptop screen for six hours. The same happened to a colleague who doesn't normally wear glasses. This doesn't happen to either of us with VR headsets.

3) There's not much to do with it, so far.
Usually when I test a new kind of technology, I demo it to people of different ages and of different technical expertise. (I'm available for show and tell at dinners and kids' parties.) But that was especially hard to do with Magic Leap because it comes with so few apps.

The best experience is an app called Create. It lets you paint in 3D and create dioramas with pre-made animated creatures.

Others, like an NBA experience, weren't as compelling. A game called Dr. Grordbort's Invaders is advertised on the device though not yet shipping.

My greater worry is that Magic Leap doesn't seem to have figured out how to offer AR experiences that are fundamentally better than what we've seen before. Magic Leap says its goal with this product is to get it into the hands of creators who will come up with those ideas.

4) It is comfy on your head - but you can't pass it along.
The Magic Leap One is more comfortable to wear than many other face computers. That's because the company smartly chose to put the heaviest bits, including the processor and roughly 3-hour battery, into that circular computer that clips into a pocket or you wear with straps like a purse. The headpiece itself weighs three quarters of a pound, and sits above your ears, higher on the back of your head than you might think.

Unfortunately, the individually calibrated nature of the product makes it hard to just hand your glasses over to a buddy to try.

5) "Spatial computing" is cool, but the remote control doesn't make sense
The best thing about Magic Leap is that it knows where you are in relation to everything else in the room. A bunch of sensors on the headgear map the space around you, so you're free to just move around the room and interact with virtual things. Can't quite read some text on a virtual sign? Physically move closer to inspect it, just like you would in the real world.

But interacting with the world isn't smooth because of the included remote, which is like a cross between an Apple TV clicker and an XBox controller. The buttons aren't intuitive in 3D space, and there's not much unity between how you use it in different apps: Is it a trackpad? A magic wand? A lightsaber?

I was confused by the user interface in several apps. For example, in a web browser app, you can leave windows to hang out at different parts of the room. But how do you collect, move and close all the windows you leave littered around the room? (Just when you thought opening too many web browser tabs was a problem . . .)

The Magic Leap One can also track your hand movements and the position of your eyes, which could unlock interesting potential. Few apps yet take advantage of it.

6) Yep, you look like an idiot wearing this.
Google Glass was sunk, in part, by how it made its owners look. The Magic Leap One looks like a prop from "Mad Max: Fury Road" - very cool if you're looking for a futuristic costume, but not something you'd wear walking down the street. (Magic Leap doesn't recommend wearing it outdoors, anyway.)

The design also introduces social problems. Though you can see the people around you, they have no idea what you're looking at - if you're paying attention, or even if you're recording them. This information imbalance also contributed to Google Glass' woes.