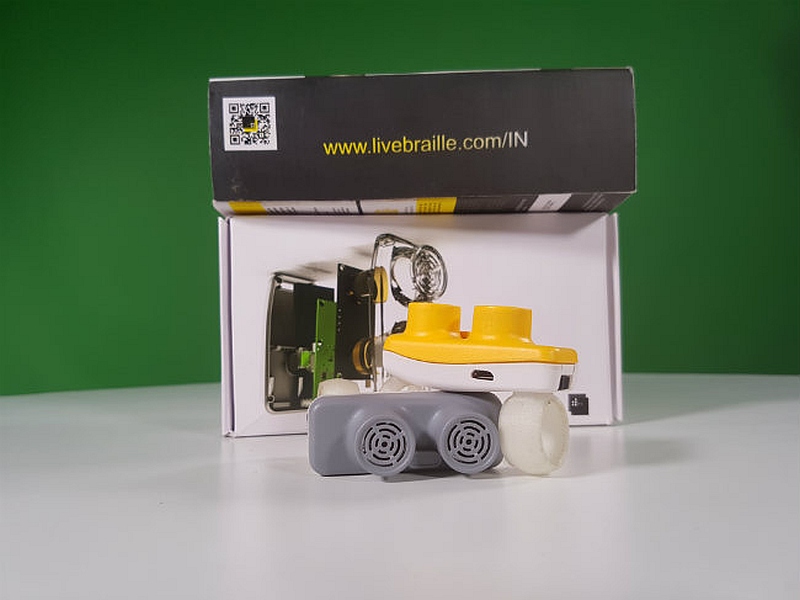 Assistive technology for people with disabilities is an area that is largely underdeveloped, particularly in India but also around the world. Technology is either sidelined, or made completely inaccessible due to high costs, with only iterative improvements happening in limited ways. This is a sentiment that has been shared by just about every expert we have spoken to over several years, and it's something that's echoed by Abhinav Verma, the founder-MD of Live Braille.

Verma, who only completed his education in Mechanical Engineering from Chitkara University in Chandigarh, has spent the last two years working on Live Braille, a wearable device that can help people who are visually challenged to move about more freely. The Live Braille Mini is a small device that can be worn like a ring, and it has two ultrasonic rangefinders that are used in tandem to detect how far an obstacle is, what direction it is in, and a few more advanced functions as well. The users wear the device on a finger, and point their hand in the direction they're walking in - the sensors check if the path is clear and vibrate if there's an obstacle in the way. Haptic feedback can tell the user how far any obstacle is.

If you're prone to hyperbole, you might be tempted to describe it as a wearable that can help the blind to "see". A more realistic explanation is to say that it is a replacement for the canes that people with visual disabilities learn to use, in order to be able to walk without hitting obstacles.

(Also see: This Indian App Is Giving the Differently-Abled a Voice)

The basic concept isn't very new - sensors to detect obstacles have been around for a while, and we've seen designs that incorporated these sensors into canes before. There are plenty of advantages to this kind of technology - a simple cane have very limited range, and you won't know about any obstacles until you're actually in contact with them. The IIT Smart Cane has a range of three metres, and the cane will vibrate if it detects an obstacle, so the user can change directions without waiting to hit something. Recently, Snapdeal partnered with IIT Delhi to sell the SmartCane at Rs. 3,500. 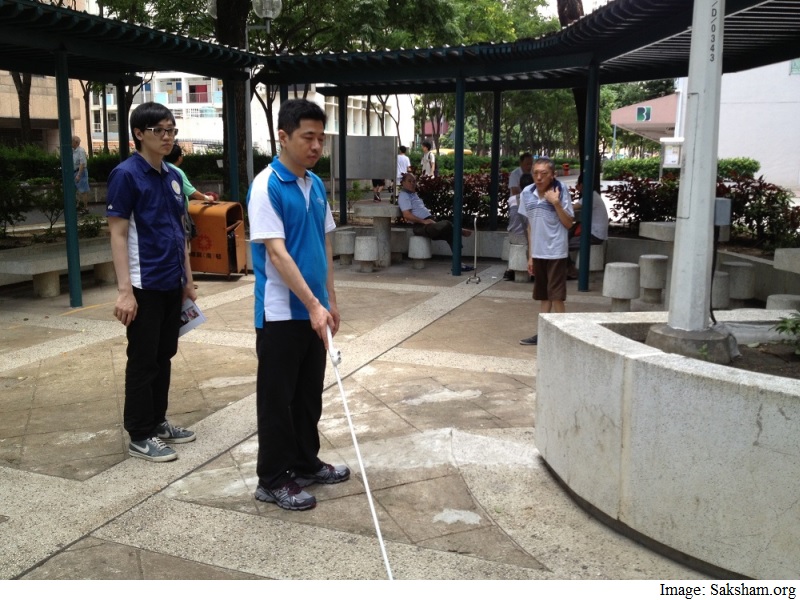 "The problem with these existing devices is that they can't keep up with the users," says Verma. "Most devices have a refresh rate of five per second, so if you're moving fast, then it won't give an accurate idea of what's in front of you."

Live Braille on the other hand, is sending out 50 ultrasonic pulses in a second, claims Verma. There are other advantages too, he says. "For one thing, it's light, a cane will weigh 500g to 1kg, depending on what type of cane you get, so this is more convenient [the Mini weighs 29g]," he adds. "And the haptic feedback is so precise, there are 17 different types of vibrations, with different feedback for close range and long range objects."

The Live Braille Mini, which uses proprietary sensors, uses Immersion's TouchSense 2000 certified technology for the haptic feedback, and can be charged via Micro-USB in 45 minutes, to give six hours of usage. 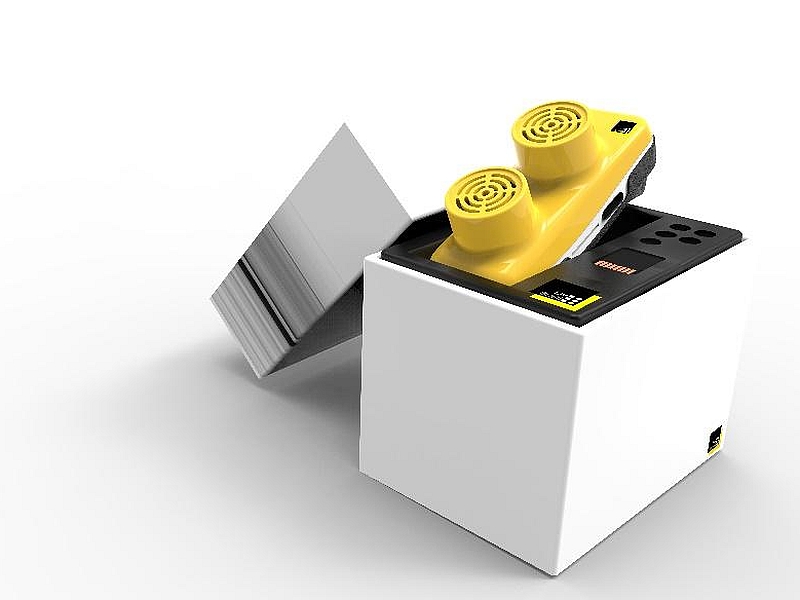 In both cases, the sensor can also detect objects in motion, and detect the "texture" of an object, according to Verma, so the wearer will know if the obstacle in front of him is a person, or a wall, for example.

"It takes training, it's not like magic," says Verma. You can't put one on and automatically start to find your way around. That's why Live Braille is working on a logistics setup that allows the company to send someone to spend an hour teaching the users how to walk with the device.

"At first people will try it very cautiously because they don't know how good it is, but we've seen them want to run by the end of it," says Verma. "It is intuitive, and once the user gets the hang of it, I've seen people in half an hour of training they will be able to tell you how close an object is, and in what direction."

The product emerged from a device Verma and his friends worked on as students, that they called Live Braille. The device was a glove, with five sets of sensors, that would track this data from all points, to give a much more comprehensive picture. The problem was that it was also pretty big, and not so convenient, says Verma. "The Mini is small and light, you can put it in your pocket when you're not using it, and it's easy to use and to learn," he says. You can see the old glove in use in the video below.

One of the users of the device, a student from Chandigarh named Ram Singh, says he liked it and thought it made a big difference. "The way it vibrates is an easy way to get an idea of what's in front of you and it's made getting around easier," says Singh. "A stick you have to hit something, this is a lot better."

On Live Braille's site, there are other testimonials, with plenty of people praising the product. The common theme is that it's giving people their independence, because of its accuracy, and also it's small size. We talked to Dr. Premlata Jha of Delhi, a practitioner who works with the visually challenged. Because of how new the device is, she hasn't seen one in person yet. According to Verma, around 200 devices have been shipped since January, so that's not unusual. After seeing videos and photos of the device though, Dr. Jha says she's intrigued.

"I've worked with people who are using the SmartCane [it has nearly 10,000 users in India so far] and although this looks very different, the basic idea seems similar," says Dr. Jha. "It can be a huge benefit, particularly at this price. The people I've worked with have been able to get a lot more independent, and I can see how this would also have the same effect on someone's life."

Since January, Live Braille has been taking pre-orders for the Mini, which is priced at Rs. 6,999. Ther are also plans for interest free EMIs, and lease plans for NGOs. "With the Live Braille Freedom plan, we can give you the device on a three year plan. Or an NGO could lease these from us, and we can tailor the price, those are going to be specific deals and would depend on many variables." 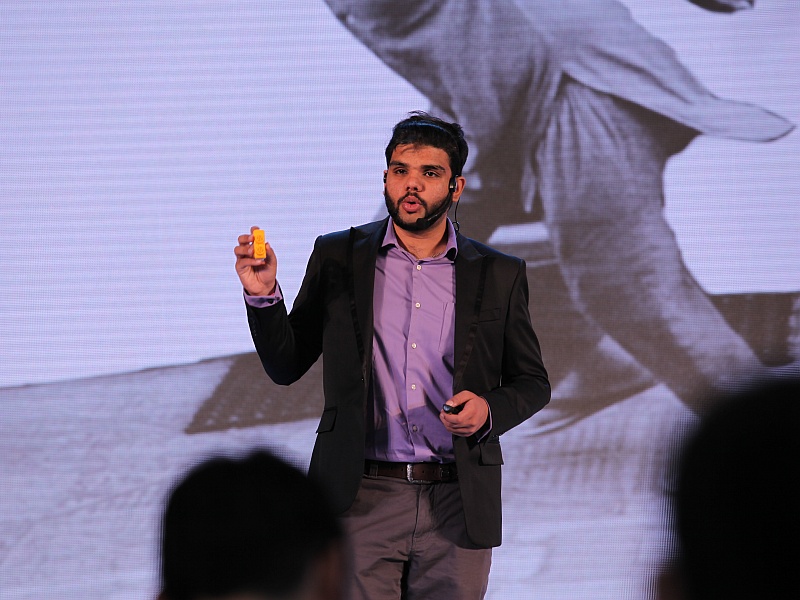 It becomes clear when talking to Verma that while he believes in the importance of what Live Braille is doing, he's clear about the fact that it's a business that has to be able to sustain itself.

The next step is to diversify the product line. The Mini E, or Education, is the next product that's coming, and it's priced at Rs. 9,999; for the extra Rs. 3,000, you get microSD storage, and you can also connect the device to your laptop using the Micro-USB cable. The result is that you can store audiobooks on board, and use the device to listen to them as well. It can also be used for FM playback. Verma believes this is going to be simpler than using multiple devices, and can make the Live Braille Mini E something that's useful whether you're on the go, or sitting down. The Mini E will also come with an "unbreakable" polycarbonate body (an upgrade from the existing plastic case) and longer battery life.

The product, which is designed and assembled in India is also going to be launched on Flipkart soon, at which point, it can directly address India's population of nearly 50 million visually challenged people. The challenge, as it scales, is going to be how it manages to still train every new user that's brought on board, and that's perhaps why Verma says the company is partnering with various NGOs, who can help with awareness and education. The devices are also being sold globally, at $199 (approximately Rs. 13,000) for the Mini, and $449 (approximately Rs. 29,000) for the Mini E.

"The market for assistive technologies has just been ignored. What products are there are priced in lakhs, not thousands," says Verma, "and that leaves a huge market that is not being served at all. We wanted to bring the prices down to what most people would pay for a smartphone, because that's affordable to a wide range of people."