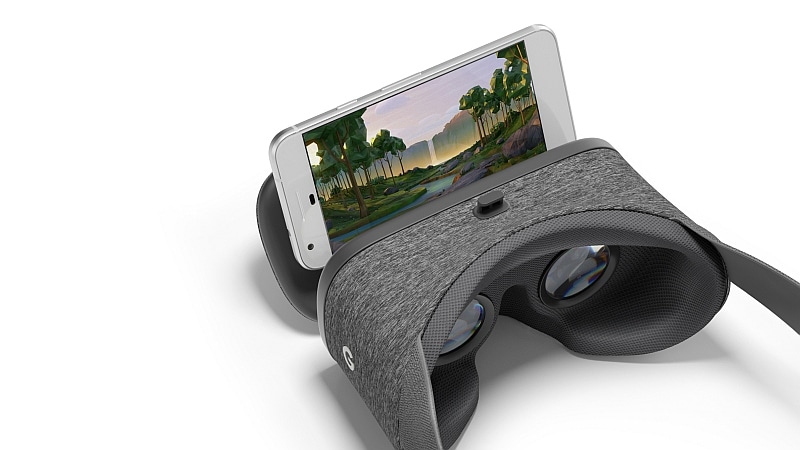 Google’s newly-launched line of Pixel smartphones will not only power the company’s smartphone dreams but also be the driving force behind the company’s new Daydream VR headset. Daydream View, unveiled at last night’s event in San Francisco, is a $79 (roughly Rs. 5,300) headset with its own controller that aims to become for virtual reality devices what the early Android phones were for smartphones.

Daydream View is part of the Daydream VR ecosystem that Google is developing and is the second virtual reality headset that the company has produced, after Cardboard. The headset requires a Daydream-ready smartphone to work, and there are only two such phones in the market – Pixel and Pixel XL. However, Google has roped in other hardware partners who have committed to make compatible smartphones in coming times.

The Daydream VR headset is a lens-bearing shell with a flap; slide the smartphone in its slot (the same way you do for Cardboard or Samsung Gear VR headsets) and you are good to go. The headset itself is devoid of sensors and instead relies on the sensors on the Daydream-compatible smartphones and the bundled wand controller (which we will get to in the next paragraph) to power the VR experience. On the other hand, the headset ensures automatic alignment with the help of integrated hardware.

Covering the shell is a cloth enclosure that is made of thermo-bonded materials and is washable. The flap closes up on back of the smartphone via Velcro and is said to be dense enough to ensure no light passes through. Cloth as a material of choice makes Daydream View the first VR headset to not be made entirely of plastic. This makes the new Google VR headset lighter than most models in the market.

The third part of the Daydream View equation is the wand controller that allows the user to interact with the headset. Similar to the Wii controller in function, the Daydream wand is small, 3-axis controller and features two buttons (home and action) on the top, and volume keys on the side. There is also a big, circular trackpad with a clickable button on the top. The wand controller has a 220mAh battery, can be charged via USB Type C, and can be tucked into a slot of its own on the headset’s exterior.

This wand controller will double up your best friend when you use the Daydream View headset to play VR games. It can become a wand when you are enjoying the immersive experience in J.K. Rowling's Fantastic Beasts and Where To Find Them, play golf, or work as a remote as you navigate through the menu of content and games available with the Daydream app.

As is the case with any low-cost VR headset, Daydream View does not change the user’s perspective as they walk around. However, it provide 360-degree panoramic view if you turn around, i.e. the scene changes as you move your head, but will not if you walk around. And if you ever lose track of the point of light (that gives a sense of directions in the VR world), just press the home button to recentre.

Google has made a lot of the content on its own platforms Daydream-friendly, so you can look forward to immersive videos and movies on YouTube and Play Movies, or a tour of the Taj Mahal or a museum courtesy Street View. Moreover, 50 more companies are in the process of creating more virtual reality content for the Daydream platform.

The Daydream View VR headset comes in three colours (Snow, Slate, and Crimson) and will be available for advanced bookings later this month and will go on sale in November at $79. Google is also giving away free Daydream View units to those who are pre-ordering the Pixel phones, but that offer is valid only “while supplies last.”

Behind the Pixel: Google's First Real Threat to the iPhone