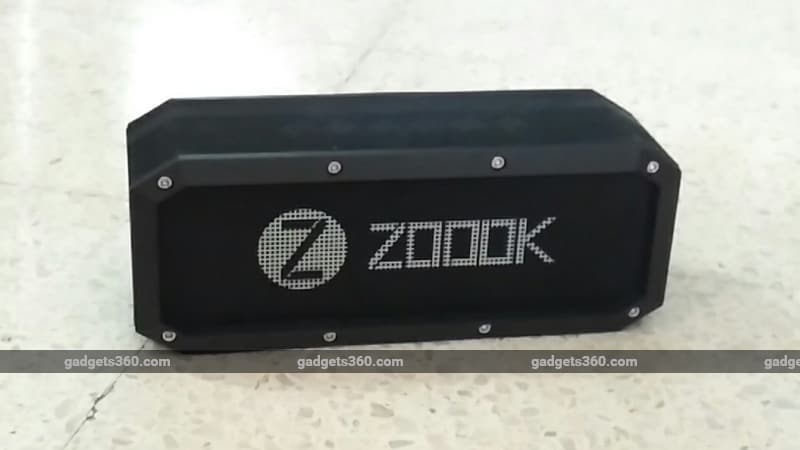 The audio brand Zoook, which has been selling its products in India for a few years now, makes a wide range of gear aimed at the mass market. Earlier this year, the company launched a new Bluetooth speaker, the Zoook Armor XL, which is described on the box as a "portable rugged waterproof wireless stereo speaker". We got to test out the speaker, and although we liked it and think it could be a good buy for the right person, we believe that description is pretty misleading.

Let's talk a little about everything that's wrong with the description before getting to the detailed review. First up, the Armor XL is bulky, and will certainly not slip into your pocket or laptop sleeve, so it's not particularly portable unless you regularly move around with a backpack. It certainly looks rugged, but it's not dust-proof and doesn't feel as tough as, say the Altec Lansing Lifejacket, which we’ve seen being driven over by a car - and survive. It's also not waterproof - it's rated IPX-5, which means protection from a 6.3mm spray of water for at least 3 minutes.

That means you can spill your water on it, but it's not something you can hang from the shower like, say, the Logitech UE Roll. It is wireless, and a speaker, though it has three drivers and not two - though we doubt most people will hold that against the Rocker XL. On the other hand, it is surprisingly loud, and it is also relatively cheap - it's selling for Rs. 3,799, or about half the price of the UE Roll, and one-third that of the Lifejacket.

The question is whether you get your money's worth with this speaker. Let’s find out as we take a detailed look at the Zoook Armor XL.

Zoook Armor XL design and specifications
The Zoook Armor XL is not going to win any beauty contests as far as its design is concerned. It's a squat, tough-looking brick of a speaker, which comes in black with a rubberised finish. A mesh grille on the front bears the Zoook branding, and has screws that stand out from the design like rivets. It's an interesting look, but not the most appealing.

It's also heavy - the speaker packs a 4400mAh battery that is supposed to give eight hours of playback, and, like we mentioned earlier, includes three drivers - weighing in at 650g. That's significantly heavier than something like the Mi Bluetooth Speaker, and makes carrying the Armor XL around a bit of a chore. The dense little brick comes with a strap you can attach to the side, though we ended up removing this - it wasn't really useful and made it look kind of silly.

The front and back are taken up by the metallic speaker grille, while the top and bottom have a rubberised layer which makes it very grippy. Thick grooves run along the rubberised layer, which will improve stability on a table or by the poolside if you prefer.

There is a small rubber flap at the back of the Zoook Armor XL, which you can raise to connect the Micro-USB charger, or a 3.5mm cable, to connect the speaker to your phone or other output device. As mentioned above, the speaker has an IPX-5 rating, which isn't enough to submerge it - do not take this into the pool, or hang it from your shower - even though it looks the part. The speaker comes with a built-in mic and can be used for hands-free calls, and there are six buttons on the top - power, next, and previous track, volume up and down, and a play/ pause button that is also used to answer calls or hang up.

In terms of audio hardware, there are three drivers, rated at 10W each. This includes two 50mm subs, and one 45mm driver, and there are passive bass radiators. The company claims a frequency range of 40Hz to 20KHz, and the Zoook Armor XL supports the Bluetooth 4.0 standard.

Zoook Armor XL performance
That's all fine on paper, but it comes down to how the speaker actually sounds - and there the Zoook Armor XL feels a little disappointing. To test the speaker, we listened to the White Album by the Beatles, and the Hamilton Cast Album, played from CD using the 3.5mm jack; we also listened to Yeezus by Kanye West, and Aerogramme by Goldspot, streamed via Apple Music on an iPad connected to the speaker over Bluetooth. Apart from this, we also streamed audio from YouTube, the audio from the game Hungry Shark, and used the speaker to make a few calls on and off across several days.

The first thing anyone will notice is how loud the speaker can get; running at full volume on the speaker and the source, it was too loud to leave on the table next to where we were working. The clarity at that volume level takes a bit of a beating, but the audio is detailed, and you will hear the different frequencies in there separately. The problem is that especially at lower frequencies, things start to blend together - the bass is loud, but it's just not sharp. The same problem is true, though to a lesser extent, at the higher end of the spectrum.

Listening to the Beatles, songs like While My Guitar Gently Weeps, and Happiness Is a Warm Gun left you wishing for a wider soundstage and clearer notes. Lowering the volume helps with the latter problem, but can't really fix the former. The Hamilton songs have wide range, so the speaker was average at best for this kind of music. In general, it performed fine for watching a movie on your iPad or playing some loud music when your friends come over. If you're a music lover who cares more about listening experience then you could actually consider the cheaper Mi Bluetooth Speaker - it's not nearly as loud, but it sounds good if you plan to keep it on your table next to your laptop while you work.

Verdict
The MRP of the Zoook Armor XL is Rs. 5,499, but it's available right now at Rs. 3,799. At the MRP, we wouldn't find it easy to recommend - for just a little more, you can get some really nice products from Logitech, for example. Altec Lansing also has a couple of really nice speakers around that price point. At the lower price, it is a lot more appealing.

The speaker sounds just about okay, but it's also nice and loud, which will definitely appeal to quite a few people. If that’s something you can live with, then the Zoook Armor XL would be your pick.