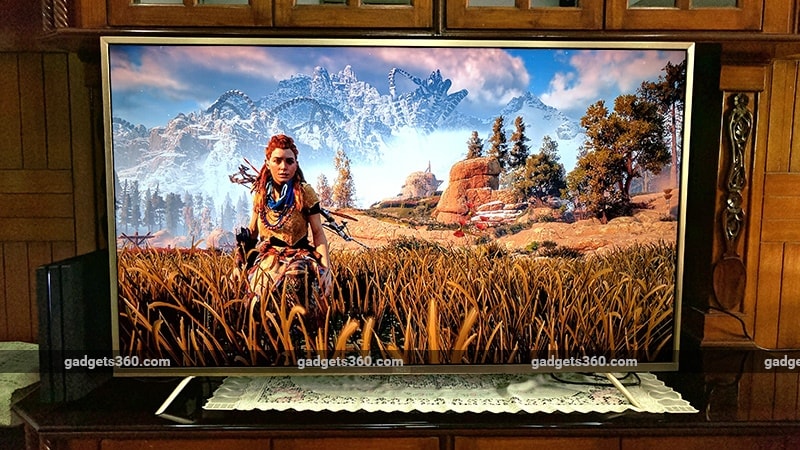 After years of trying to justify the upgrade, 4K televisions are finally seeing market acceptance thanks to support from content providers, with streaming services and even game consoles offering 4K experiences. One factor that has really helped push the envelope is the advent of HDR, which boosts image quality to a level that feels like a huge upgrade over the 1080p panels that most people have been using for the past few years.

Of course, price still plays a big role, and it could be a while before 4K HDR can become a household staple. Most TVs that offer this feature are priced at over Rs. 1 lakh, which is out of most consumers' budgets, but we are now seeing that begin to change. Budget brands such as Micromax and Intex are getting into the 4K game and so are some Chinese manufacturers. In this case, we have TCL. Launched in India as an Amazon exclusive brand, TCL is not the first to offer 4K HDR at a relatively low price point, but it is getting noticed thanks to Amazon India’s push. Of course, we were interested to see what the hype is all about.

The TCL L55P2MUS has a pretty straightforward, unassuming design. It has around half an inch of metallic golden border around all four sides of the panel, and an easy-to-assemble four-piece stand that we managed to set up in a matter of minutes. TVs these days don’t allow much movement in terms of swivel or tilt, so having the TV face forwards with its minimalistic stand is acceptable. The unit is quite slim at the top, but it does gain some breadth on the lower half to accommodate its ports and the down-firing speakers. The metallic gold finish is only seen on the front of the TV, and you get matte black plastic on the back, as with most flat panels.

For connectivity, the TV has two HDMI ports, two USB ports (1xUSB 2.0, 1xUSB 3.0) and a headphones socket on the left, plus two more HDMI ports (making it a total of four), optical audio output, Ethernet, and analogue RF and component inputs at the back. Besides these, the TV also supports Wi-Fi and Bluetooth for wireless connections to the Internet and other devices. For a budget smart TV, this is quite a generous amount of connectivity.

The TV comes with two remotes. One of them is a traditional IR type with a button for every function, which is comfortable if you don’t want to learn how to use a new input method. The other remote is a bit more exciting with its minimalistic look, Bluetooth connectivity and voice controls powered by Google. We definitely preferred this as it makes content discovery and searching a lot easier.

The TCL L55P2MUS runs Android 6.0.1 Marshmallow and has access to the Google Play Store. Setting up this TV is super-easy if you have another Android device set up with your Google Account and Wi-Fi settings. You just have to go to a URL and enter the TV’s code, and everything is set up for you automatically.

You get Netflix preinstalled, and both remotes even have dedicated buttons to launch it. Other notable apps are YouTube, Google Play Movies, Google Play Music, and some other Android TV staples from Google. Amazon Prime and Hotstar are missing from the options available in the Google Play Store, but you still have the option to cast content from your PC or mobile device since Chromecast functionality is also built in.

In fact, Chromecast integration saves the day, since the Play Store has some seriously slim pickings when it comes to entertainment apps. On the other hand, you have a lot of options to choose from if you’re hoping to play Android games on your TV. Since the L55P2MUS supports Bluetooth accessories, you can pick up a standard Android controller and it that for games that support it.

Android TV means that there is boot-up time, which no one really wants to deal with in a TV. It takes around 35 seconds to load the OS, and during that time all controls on the remote are disabled. You have to wait till the booting process is done before you can get on with doing anything. There’s no sleep option on the remote, so even if you temporarily turn the TV off, it powers down completely. You'll need to boot it up all over again and reopen the app you were using last. Sure, this is more of an Android TV issue than a TCL issue, but an alternative (like a sleep mode) definitely needs to be worked on.

The L55P2MUS has 16GB of internal storage, of which only 10GB is actually usable. This really doesn’t count for much when you’re talking about storing 4K files. It’s enough for apps though, as long as you don’t download too many large games. It’s powered by a quad core 1.5GHz ARM CPU with an integrated Mali-T860 GPU, paired with 2.5GB of DDR3 RAM. The processing power won’t blow you away, but it works for the Android TV interface. UI navigation isn't exactly blazing fast, but the only place we felt actual lag was when we used the voice search function.

The panel itself is a 55-inch 3840x2160 (4K UHD) screen with support for HDR-10. It has LED edge lighting that’s pretty obvious in darker scenes thanks to prominent leaks. The TCL L55P2MUS demonstrated very contradictory performance. With standard dynamic range (Non-HDR) content, we saw a visible vignette effect at the edges of the TV. This was reduced to a large extent when watching HDR content, especially when there was bright imagery on screen. This could be because of the higher brightness or better backlight control that HDR involves, but your mileage might vary.

There is no independent brightness control in the TVs settings, which does seem a bit off. However, you do get an option to set the backlight level, which is by default set to the maximum. We have to say that even at this level, the panel isn’t really all that bright. It’s fine if you’re watching content in complete darkness, but it does fall short in a brightly lit room, which is the case for most home users. For someone who’s experienced HDR in all its glory, this experience does fall short.

While images were crisp in most cases, the TV does tend to over-sharpen what it displays. During gaming, this makes jagged edges and flaws more visible and with streaming media, you can see compression artefacts even when content is playing at 4K. These are issues you’ll see if you're sitting close to the TV.

Still, all these gripes are minor compared to one big issue we had – the way this TV handles reds. Across all our test media, games and streaming video, the reds seemed to lack a sense of depth. At the TV's default settings, colours are a bit muted anyway, but reds, especially, suffer. The strain is much more obvious in red-heavy HDR footage. Not everyone will notice this without a comparative analysis, but to a trained eye, it could be a pretty major dealbreaker.

As far as audio goes, this TV lives up to the idea that you shouldn't expect big sound from a flat panel. As we stated earlier, it has a pair of down-firing speakers, but the sound is simply loud without much quality to it. If you want anything other than flat sounds - such as high-impact thuds, or crisp highs in music - then you should explore options for external speakers. The TV does have a surround sound mode, but that resulted in normalising background sounds like music and other effects with primary audio such as dialogue. It was more distracting than effective.

At its price, the TCL L55P2MUS is a pretty good gateway 4K HDR TV for non-videophiles. It does what it’s supposed to in terms of delivering crisp images with HDR 10 support.

On paper, the TCL L55P2MUS is an unbeatable value-for-money proposition. It has modern specs, good connectivity, and a Smart TV OS that’s probably going to be useful for years to come. Performance-wise, there are a number of things that seem downright average. You can have a good experience when watching 4K HDR content including streaming media, but this TV will show its roughness when the footage you’re playing is less forgiving. You do get a lot for your money, but if you can afford a premium brand, then there’s no reason for you to settle for this.